A Super-Earth in Transit (and a SETI Digression)

We’ve been finding planets using radial velocity methods — analyzing the gravitational effects of planets around their stars — since the mid-1990s, and the Kepler mission has brought the transit method to the fore, looking at the lightcurves of stars when planets pass in front of them as seen from Earth. Now we have new information about a transiting planet, 55 Cancri e, in a multiple planet system, information that has been developed by reanalyzing earlier radial velocity data. The new techniques were applied by Rebekah Dawson (Harvard-Smithsonian Center for Astrophysics), working in tandem with Daniel Fabrycky (UC-Santa Cruz) to predict the orbit of 55 Cancri e.

Earlier radial velocity data on the planet had suggested a tight orbit of 2.8 days, but the new analysis pegged the orbit at something less than 18 hours. The proximity to the central star meant that the chances of seeing a transit were higher than thought (the probability moved from 13 percent to 33 percent), leading to a space-based observation by the Canadian MOST satellite (Microvariability & Oscillations of STars). The result: 55 Cancri e is found to transit its star every 17 hours and 41 minutes, validating Fabrycky and Dawson’s method. 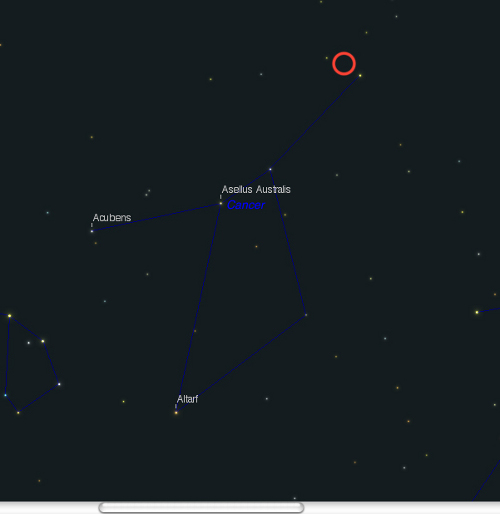 We now learn that 55 Cancri e is even more of a hell-hole than we suspected, reaching temperatures of 2700 degrees Celsius. The G-class central star, 55 Cancri A, is the closest known star to the Sun with transiting planets. It weighs in at roughly one solar mass, and is visible with the naked eye some 42 light years from Earth. Its system in interesting in many ways, with five known planets and a small red dwarf at approximately 1000 AU. The outermost planets are evidently Jupiter-class giants, but 55 Cancri e is a super-Earth now revealed to be of about eight Earth masses, with a diameter some 60 percent larger than our planet.

We’re talking about a planet almost as dense as lead. 55 Cancri e now joins the ranks of super-Earths with measured masses and radii, which gives us the opportunity to compare the properties of this class of world. The star here is the brightest of all known super-Earth hosts (2 magnitudes brighter than any other transit host, according to the paper on this work). But the transit depth — the fractional change in brightness as the planet transits the star — is among the smallest known. That makes follow-up observations trickier than expected. From the paper:

The shallow depth makes certain follow-up observations challenging despite the abundance of photons. To resolve the transit ingress and egress, and thereby improve estimates of the planet’s orbital inclination and absolute dimensions, it will be necessary to improve the signal-to-noise ratio in the phased light curve. This will require observations of more transits, or the use of larger-aperture telescopes. More daunting, but within the realm of possibility, is the detection of occultations and orbital phase variations that might betray the presence of an atmosphere…

But I also want to point to the paper’s conclusion, which notes “…there is some pleasure in being able to point to a naked-eye star and know the mass and radius of one of its planets.” True enough! And the new technique may help us refine the orbits of other planets discovered through radial velocity methods, Dawson noting “We’ve cleared up some confusion in the systems we studied, and we believe we’ve provided a way to avoid future confusion.”

A harmless digression: Ponder a habitable planet in a binary system like 55 Cancri A. Would the presence of a red dwarf practically on its doorstep, a star that could have planets of its own, give more of an impetus to any intelligent beings there to develop deep space technologies than would be the case around solitary stars like our Sun? I think that it would. In fact, I think widely spaced binaries are excellent SETI candidates for this very reason, offering a provocative sky with a nearby target, an interstellar mission nowhere near as daunting as we face in reaching Alpha Centauri. Goals count, and when they are tangible and near at hand, technologies may follow. Societies like this may be more space-minded than we are, and potentially more detectable.