Over 900 stars have been found that show signs of a debris disk, a circumstellar disk of dust and debris orbiting the star. It takes less than 10 million years for the gaseous content of these disks to dissipate, leaving the dusty disk behind. You can think of the Kuiper Belt in our own system, but the analogy would be imprecise in a crucial way, for most of these disks show much more dust. In fact, explaining the difference between the debris disks of other stars and what we see in our own system is instructive, and it may offer clues to terrestrial planet formation elsewhere. For we’re learning that long-lasting cold dust points to a system-wide stability that is probably crucial.

At issue is the question of what happens when gas giants cause gravitational instabilities in a young system. Sean Raymond (Université de Bordeaux) and collaborators tackle the question in a new paper that looks at how planets emerge from circumstellar disks. Inner disks form rocky planets in 10 to 100 million years, the result of collisions between Moon-size or larger protoplanets and smaller planetesimals. Low in solid mass, the inner disk can’t produce rapidly forming giant planet cores — these emerge further out in the system, beyond the ‘snow line’ where temperatures are low enough that hydrogen compounds can condense into ice grains. 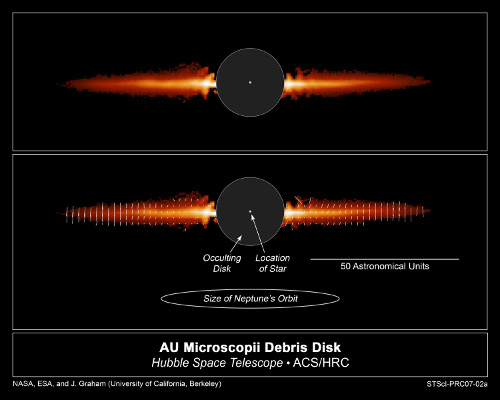 Now ponder this: Gas giants have to form quickly, within the first few million years after the appearance of the circumstellar disk of gas and dust, so they can pull in gaseous materials while these are still plentifully available. What that means is that the gas giants are present in a newly formed system while inner terrestrial planets are still growing. Raymond’s work uses simulations to look at how planetary systems around Sun-like stars evolve, studying how interactions between the giant planets and the gas disk itself affect rocky world formation.

It’s true that we’ve found numerous ‘hot Jupiters’ in star-hugging orbits, but the vast majority of giant planets are found beyond 1 AU — I won’t go into all the references here, but they’re found in Raymond’s paper, which also notes that changes as the gas disk dissipates can be a trigger to instabilities that lead to the ejection of one or more planets from the system. The simulations model the various interactions at work in a young planetary system, based on a scenario with 1) an inner disk of planetesimals and planetary embryos, 2) three gas giants at Jupiter/Saturn distances, and 3) an outer disk of planetesimals comparable to our own Kuiper Belt.

The results are striking, chief among them being that strong giant planet instabilities destroy planets in the inner system when they occur late, and can even destroy the population of icy planetesimals at the edge of the system. In about 40 percent of the unstable simulations, all rocky material was removed from the system, primarily being thrown into the host star. One in five of the simulations produced a system housing a single terrestrial planet. And gas giants in eccentric orbits deplete outer system disks by eventually ejecting their planetesimals altogether.

All of this has obvious implications for terrestrial planet hunters:

If we’re looking for terrestrial planets, systems with bright debris disks therefore move to the top of our list. These disks are the marker for relatively stable systems, where planets can accrete in the inner regions while significant dust can be produced in the outer zones, detectable at mid-infrared wavelengths. A star older than approximately 100 million years with bright emission of cold dust points to a stable environment that allows terrestrial planet formation. The paper adds that emissions like these are found around 16 percent of billion-year old Sol-type stars.

But back to the Kuiper Belt, and why our own system appears a bit unusual in this context. What we see around our Sun includes multiple terrestrial (rocky) planets, gas giants in low eccentricity orbits and relatively low dust content. The thinking is that the early system was relatively stable but later underwent a strong destabilizing event large enough to remove most of the outer planetesimal disk but not large enough to destabilize the inner system. That event was most likely the cause of the Late Heavy Bombardment, a period between 4.1 and 3.8 billion years ago when asteroid and cometary materials caused numerous impacts in the inner system. This may have been the result of giant planet migration, but whatever the instability was that caused the effect, it was weaker than could be modeled by Raymond’s simulations.

The paper is Raymond et al., “Debris disks as signposts of terrestrial planet formation,” in press at Astronomy & Astrophysics (preprint). Thanks to Andy Tribick for the pointer to this one.