Imagine a planet far more massive than Jupiter and spinning faster than Jupiter’s 10 hour rotation. Throw in a large nearby moon and the associated auroral effects that would occur as the moon moved through fields of plasma trapped in the planet’s magnetic field. The scenario isn’t all that different from what we see happening between Jupiter and Io. But here’s the kicker: Put planet and moon far away from any star, a rogue planet scenario of the kind recently discussed by Dorian Abbot and Eric Switzer, who called such rogue planets ‘Steppenwolfs.’ I jumped on that idea in a Centauri Dreams post last February because interstellar planets have always fascinated me.

Abbot and Switzer were interested in whether a rogue planet could support life, finding in their paper that a planet just 3.5 times as massive as the Earth, and with the same basic composition and age, could sustain a liquid ocean under layers of insulating water ice and frozen atmosphere. But our rogue gas giant offers something the smaller world cannot. The auroral effects created by planet and moon could be detected out to a distance of 185 light years, provided the planet were big enough and we had the appropriate equipment, which in this case means the Square Kilometer Array radio telescope. So says Heikki Vanhamaki of the Finnish Meteorological Institute in Helsinki. 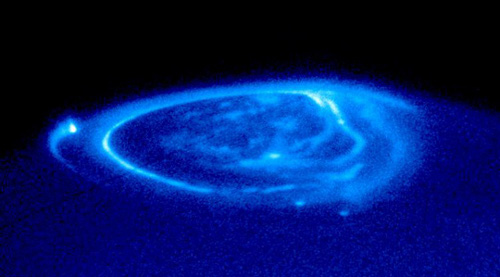 Image: Aurora on Jupiter, as detected by the Hubble Space Telescope. Can we use the emissions of such events to detect a planet wandering between the stars? Credit: NASA and the Hubble Heritage Team (STScI/AURA) Acknowledgment: NASA/ESA, John Clarke (University of Michigan).

You may recall that we also looked recently at Jonathan Nichols’ work at the University of Leicester on how an exoplanet aurora could be used as a detection tool. Vanhamaki’s calculations show that such an aurora could be produced by a rogue planet in two different ways. Movement through interstellar plasma could generate an aurora, but the scenario above, in which a moon moves through magnetically trapped plasma, produces a signature 100 times stronger. The scientist calls detection of a rogue Jupiter extremely unlikely — “perhaps nearly impossible” — in the forseeable future, but he adds that there may be 2800 interstellar planets within 185 light years, the distance within which he calculates a Square Kilometer Array might be effective.

One or more of them will have to be large enough, at least eight Jupiter masses, and orbited by a moon inducing auroral activity, for any of this to work. It’s the slimmest of chances, but earlier studies of known ‘hot Jupiters’ have predicted that some of them should produce cyclotron radiation of between 1014 and 1016 W, orders of magnitude higher than the values Vanhamaki discusses for typical interstellar planets, although these emissions have not yet been detected. Nonetheless, exoplanet aurorae seem like a promising area of research, and the suspicion that biological processes could go to work on a rogue planet makes the hunt more enticing. Says Vanhamaki:

It’s a scenario that once again turns our notion of the habitable zone on its head. We’ve gone from describing a habitable zone as a region around a star where liquid water could be maintained at the surface to seeing the possibilities of life under frozen oceans, a zone that could extend all the way to the Kuiper Belt. A rogue planet would be the ultimate habitable zone extension. If it has no reflected starlight by which to spot it, will the auroral method come into its own with a breakthrough detection?

Recall, too, that Christopher McKay (NASA Ames) has looked at a variety of scenarios involving Titan-like worlds, placing them around several red dwarf stars to see where they could host oceans of liquid methane. One idea his team looked at was a rogue Titan in interstellar space. The conclusion: A Titan with 20 times the geothermal heat of Earth could keep its current surface temperature in the absence of any star. Alternatively, an atmosphere 20 times thicker than Titan’s could retain enough heat to make a surface ocean viable. These are tall orders, but a larger Titan with a thicker atmosphere might sustain a liquid methane sea.