New Views of a Cometary Core

We looked recently at Titan Mare Explorer (TiME), a mission to land a probe on Titan’s Ligeia Mare, a methane-ethane sea that would be observed for an extended period by this floating observatory. But I don’t want to pass too quickly over Comet Hopper, one of the other missions being considered by NASA’s Discovery Program. This one is a proposal out of the University of Maryland that would land on comet 46P/Wirtanen not once but multiple times, observing the changes on the comet and in its innermost coma as it interacts with the Sun.

The innermost coma is the comet’s atmosphere immediately above the nucleus, where cometary jets and outgassing originate. Jessica Sunshine, principal investigator for Comet Hopper, says the idea is to watch how surface and coma change through a solar approach:

“We’ve had some amazing cometary flybys but they have given us only snapshots of one point in time of what a comet is like. Comets are exciting because they are dynamic, changing throughout their orbits. With this new mission, we will start out with a comet that is in the cold, outer reaches of its orbit and watch its activity come alive as it moves closer and closer to the Sun.”

Comet Hopper is being portrayed as a reconnaissance mission for an even more ambitious effort, the Comet Nucleus Sample Return mission, proposed to the European Space Agency’s Cosmic Vision program as a way to retrieve three sample cores from different locations on a cometary nucleus. We’ll see how Comet Hopper fares as it works its way through the Discovery Program process. Titan Mare Explorer and the Mars-oriented Geophysical Monitoring Station (GEMS) have also received funding from the program to develop their respective mission concepts, with one of the three to be chosen after a 2012 review.

Homing in on Hartley 2

Meanwhile, comets remain in the news in the form of new findings about Comet 103P/Hartley 2, recently studied by the EPOXI spacecraft in a 2010 flyby. One research effort draws on imagery from the 2.1-meter instrument at Kitt Peak in Arizona, using a blue filter to isolate the light emitted by cyanogen (CN) molecules in the coma of the comet. The variations over short time scales were striking, according to Nalin H. Samarasinha (Planetary Science Institute): 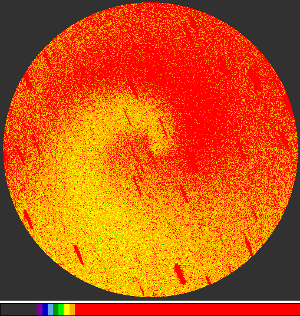 “The rotational state of a comet’s nucleus is a basic physical parameter needed to accurately interpret other observations of the nucleus and coma. Analysis of these cyanogen features indicates that the nucleus is spinning down and suggests that it is in a state of a dynamically excited rotation. Our observations have clearly shown that the effective rotation period has increased during the observation window.”

Image: An image of comet Hartley 2 taken on Sept. 3, 2010 at the 2.1 meter telescope at the Kitt Peak National Observatory near Tucson, Ariz. In this image, red denotes regions where CN gas is more abundant. The image is enhanced by removing the underlying background in order to highlight the jet feature present. North is up and east is to the left. The image is nearly 50,000 miles across and the comet nucleus which is not resolved is at the center. The red streaks are star trails. Credit: PSI.

The findings indicate just how active Hartley 2 is. Its nucleus is a scant two-kilometers long, but its rotational changes are clearly being caused by jets of gases emitted from the icy body. This is exactly the kind of information we need as we continue to study both comets and asteroids to learn how to deal with any future objects that may be on a collision course with the Earth. Samarasinha points out that the material properties of comets are crucial for such purposes:

“…fortunately for the first time, we are on the threshold of our technical knowhow to mitigate such a hazardous impact,” Samarasinha said. “In order to do that we need to know the material properties of comets. The most appropriate mitigation strategy for a strong rigid body is different from that for a weakly bound agglomerate.”

At NASA GSFC, Michael Mumma and team collected data from telescopes in Hawaii and Chile as part of the worldwide effort to add to our knowledge of Hartley 2, folding in their findings with images taken by EPOXI. The combined work indicates that the comet’s core is not uniform, but appears to contain two and possibly three different kinds of ice. This is where a mission like Comet Hopper could be valuable, with its ability to make in situ investigations at multiple sites on the surface of the nucleus. The ices in Hartley 2 are primarily made of water, along with traces of other kinds of molecules. These remain frozen until warmed by the Sun, when they become swept up into the coma.

Knowing of the comet’s rapid rotation, the researchers studied how these molecules were detected during each rotation, finding not only swift changes in the amount of water but equivalent changes in the amounts of the other gases. “This is the first time anyone has seen an entire suite of these gases change in the same way at the same time,” says Mumma. It’s a significant result because cometary gases are usually studied one at a time. Examining the simultaneous behavior of a whole range of gases helps scientists get a better idea of the comet’s composition. 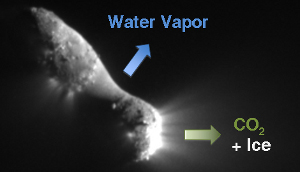 But EPOXI had shown a large variation in the release of carbon dioxide relative to water. What seems to be happening is that chunks of water ice are glued in the cometary core by frozen carbon dioxide. The latter evaporates before the water ice, dragging ice grains out of the comet that later evaporate to produce water vapor in the coma. The process hasn’t been seen in other comets. Moreover, EPOXI found variations in the location of carbon dioxide, showing that the composition of the core changes from one region to another.

Image: Jets spew out ice and carbon dioxide from one end of comet Hartley-2 in this EPOXI image, while water vapor gets released from the middle region. The differences suggest that the comet’s core is made of at least two different ices. Ground-based measurements suggest the presence of a third ice. Credit: NASA/JPL-Caltech/UMD.

Mumma’s team confirms the finding, examining four types of gas to see how they were produced. Water and methanol came off the comet in all directions. Says Mumma:

“Because they are found together, we infer that they come from the same chunks of ice. So, we have water ice with methanol in it, and we have carbon dioxide ice. Both are in the comet’s core. We may also have a third type of ice, made from ethane [the ethane was released strongly in one direction]. This is actually rather profound. It suggests that some molecules, such as methanol, may be mixed with water, while others, such as ethane, are not. This isn’t the way we’ve thought of comets, before now.”

Mumma says Hartley 2 could be “…the first of a new breed.” But learning more about how comets are formed and how they behave as they make their approach to the Sun is clearly high on the priority list for near-term missions, whether Comet Hopper flies or not. Comets offer not only a window into the early history of the Solar System but a possible source of materials as we look toward the human exploration of the planets. Knowing their properties will also help us map strategies in the unlikely but not inconceivable event that a cometary impact with the Earth looms in our future.