Beyond the Kepler Planets

Kepler is a telescope that does nothing more than stare at a single patch of sky, described by its principal investigator, with a touch of whimsy, as the most boring space mission in history. William Borucki is referring to the fact that about the only thing that changes on Kepler is the occasional alignment of its solar panels. But of course Borucki’s jest belies the fact that the mission in question is finding planets by the bushel, with more than 1200 candidates already reported, and who knows how many other interesting objects ripe for discovery. Not all of these are planets, to be sure, and as we’ll see in a moment, many are intriguing in their own right.

But the planets have center stage, and the talk at the American Astronomical Society’s 218th meeting has been of multiple planet systems found by Kepler, after a presentation by David Latham (Harvard-Smithsonian Center for Astrophysics). Of Kepler’s 1200 candidates, fully 408 are found in multiple planet systems. Latham told the conference that finding so many multiple systems was a surprise to a team that had expected to find no more than two or three. 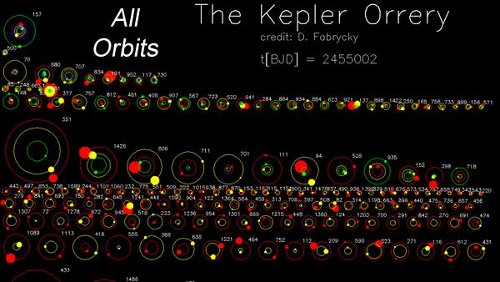 Image (click to enlarge and animate): Multiple-planet systems discovered by Kepler as of 2/2/2011; orbits go through the entire mission (3.5 years). Hot colors to cool colors (red to yellow to green to cyan to blue to gray) are big planets to smaller planets, relative to the other planets in the system. Credit: Daniel Fabrycky.

Interestingly, multiple planet systems may give us the help we need to detect small, rocky worlds. While the radial velocity method helps us find larger objects orbiting a star, terrestrial-class worlds are small enough that their radial velocity signal is hard to detect. With a multiple planet systems, astronomers will be able to use transit timing variations, measuring how gravitational interactions between the planets cause tiny changes to the time between transits. Latham’s colleague Matthew Holman notes the power of such a signal:

“These planets are pulling and pushing on each other, and we can measure that. Dozens of the systems Kepler found show signs of transit timing variations.”

Using the transit method, Kepler should be able to identify small planets in wider orbits around their stars, including those that may be in the habitable zone, but transit timing variations may flag the presence of such planets and play a role in the intense follow-up that will produce a confirmation. We have exciting times ahead of us as Kepler continues its mission. Meanwhile, what accounts for the flatness of the planetary orbits in these multiple planet systems? Latham gives a nod to the fact that most of them are dominated by planets smaller than Neptune. Jupiter-class worlds cause system disruptions that can result in tilted orbits for smaller planets.

“Jupiters are the 800-pound gorillas stirring things up during the early history of these systems,” said Latham. “Other studies have found plenty of systems with big planets, but they’re not flat.”

A Catalog of Eccentric Objects

Kepler’s treasure trove includes far more than planets, as an interesting article in Science News points out (thanks to Antonio Tavani for the pointer to this one). After all, the observatory is looking at tens of thousands of stars to produce its planetary finds, and in most cases, planets aren’t lined up in such a way that they can be seen from Earth, if they exist. But Science News quotes Geoff Marcy (UC-Berkeley) on the variety of stars being seen: “There are so many stars that show bizarre, utterly unexplainable brightness variations that I don’t know where to begin.”

Consider the English amateur Kevin Apps, who became curious about a red dwarf in the Kepler field that was not among the 156,000 chosen for full investigation. Apps discovered that he could get light curves for the system from data produced by Kepler’s initial commissioning phase. The light curve showed dips spaced 12.71 days apart, an intriguing find that led him to contact professional astronomers who went to work on the system themselves. The result: The red dwarf turned out to be not a single star but a widely spaced binary of two M-dwarfs, with a massive object in orbit around the larger of the stars, evidently a brown dwarf.

Kepler keeps turning up oddities. A star called KIC 10195926, for example, twice the mass of the Sun, shows ‘torsional modes’ in its rotation — the star’s northern and southern halves spin at different rates, trading off which spins fastest. This is the first time such torsional modes have been seen. The star has now been classed as an Ap star — A-peculiar — with a strong magnetic field. It’s the subject of a paper in Monthly Notices of the Royal Astronomical Society.

The star HD 187091, about a thousand light years from the Earth, is twice as massive as the Sun. Kepler’s light curve showed a 42-day cycle, with the star’s brightness rising to a peak and then quickly subsiding, with numerous secondary brightness variations between the peaks. It turns out this is not a single A-class star, as previously believed, but two stars of nearly the same size in a highly elliptical orbit. Let me quote from Science News on this, drawing on the magazine’s interview with William Welsh (San Diego State University):

The brightening occurs as the stars, tidally warped by their gravity at closest approach into slight egg shapes, roast one another on their facing sides and heat up. And that explains the spike in brightness, the team reported online in February at arXiv.org. The more surprising revelation of Kepler’s data is that one, and perhaps both, pulsate furiously at rates that are precise multiples of their rate of close encounters, in some cases pulsing exactly 90 and 91 times for each orbit. “Nobody had ever seen, or even thought, something like this could happen,” Welsh says. Discovering that a star’s rapid pulsations are not always driven by internal processes, but can be paced by a tidal metronome from a partner star, offers a new window into stellar dynamics and structure.

How many more such surprises will Kepler give us? An extended Kepler mission (and we might be able to get an additional four or five years beyond the 2013 original mission end date) should yield interesting objects galore. The follow-up to Kepler might be the European Space Agency’s Plato (Planetary Transits and Oscillations of Stars), which would, like Kepler, examine star fields for lengthy periods of time, but would also be able to swivel and look at different stellar fields. Perhaps the success of Kepler will give Plato the boost it needs for a liftoff in this decade.

Previous post: Progress Toward the Dream of Space Drives and Stargates