On the Calendar: Exoplanets and Worldships

Be aware of two meetings of relevance for interstellar studies, the first of which takes place today at the Massachusetts Institute of Technology. There, a symposium called The Next 40 Years of Exoplanets runs all day, with presentations from major figures in the field — you can see the agenda here. I bring this up because MIT Libraries is planning to stream the presentations, starting with Dave Charbonneau (Harvard University) at 0900 EST. Those of you who’ve been asking about Alpha Centauri planet hunts will be glad to hear that Debra Fischer (Yale University), who is running one of the three ongoing Centauri searches, will be speaking between 1130 and 1300 EST.

The poster for this meeting reminds me of the incessant argument about what constitutes a habitable planet. It shows two kids in a twilight setting pointing up at the sky, their silhouettes framed by fading light reflected off a lake. One of them is saying ‘That star has a planet like Earth.” An asterisk reveals the definition of Earth-like for the purposes of this meeting: “…a rocky planet in an Earth-like orbit about a sun-like star that has strong evidence for surface liquid water.” So this time around we really do mean ‘like the Earth,’ orbiting a G-class star and harboring temperatures not so different from what we’re accustomed to here. 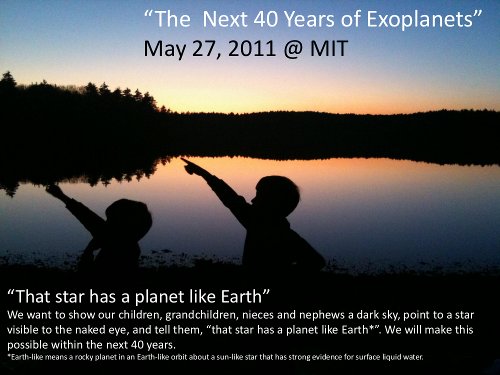 And no, that doesn’t rule out more exotic definitions of habitability, including potential habitats around M-dwarfs or deep below the ice on objects far from their star. But finding an ‘Earth’ fitting the symposium’s definition would seize the public imagination and doubtless inspire many a career in science. The forty years referred to in the title of the meeting is a prediction that within that time-frame, we’ll be able to point to a star visible with the naked eye and know that such a planet orbits it. While following the events online, you might also want to track writer Lee Billings (@LeeBillings on Twitter), who’s in Cambridge for the day. Lee’s insights are invariably valuable.

Addendum: Geoff Marcy, amidst many a pointed comment about NASA’s priorities, also discussed in his morning session a probe to Alpha Centauri, as reported by Nature‘s newsblog:

On the back then of these serious policy criticisms came Marcy’s provocative idea for a mission to Alpha Centauri. He appealed to US President Barack Obama to announce the launch of a probe that would send back pictures of any planets, asteroids and comets in the system in the next few hundred years, with the US partnering with Japan, China, India and Europe to make it happen. “It would jolt NASA back to life,” he declared. Maverick it might sound, but many in the room seemed to take the idea in the spirit of focusing minds on the ultimate goal of planet-hunting; to take humanity’s first steps towards reaching out to life elsewhere in the universe.

Into the Generational Deep

The other conference, this one deep in the summer, takes us into the domain of far future technology. Some of the great science fiction about starships talks about voyages that last for centuries — I’m thinking not only of Heinlein’s Orphans of the Sky (1963, but drawing on two novellas in Astounding Science Fiction from 1941), but also Brian Aldiss’ Non-Stop (1958) and the recently published Hull Zero Three, by Greg Bear. In each case, we’re dealing with people aboard a vessel that is meant to survive for many human generations, a frequent issue being to identify just what is going on aboard the craft and what the actual destination is. 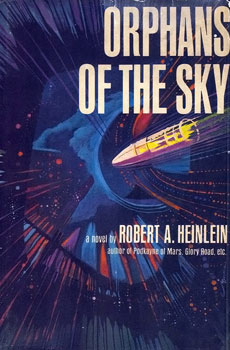 Call them ‘generation ships’ or ‘worldships,’ vast constructs that are built around the premise that flight to the stars will be long and slow, but that human technology will find a way to attain speeds of several percent of the speed of light to make manned journeys possible. A surprising amount of work has been done addressing the problems of building and maintaining a worldship, much of it appearing in the Journal of the British Interplanetary Society. Now the BIS is preparing a session dealing explicitly with worldships. Here’s their description of the event:

In 1984 JBIS published papers considering the design of a World ship. This is a very large vehicle many tens of kilometres in length and having a mass of millions of tons, moving at a fraction of a per cent of the speed of light and taking hundreds of years to millennia to complete its journey. It is a self-contained, self-sufficient ship carrying a crew that may number hundreds to thousands and may even contain an ocean, all directed towards an interstellar colonisation strategy. A symposium is being organised to discuss both old and new ideas in relation to the concept of a World Ship. This one day event is an attempt to reinvigorate thinking on this topic and to promote new ideas and will focus on the concepts, cause, cost, construction and engineering feasibility as well as sociological issues associated with the human crew. All presentations are to be written up for submission to a special issue of JBIS. Submissions relating to this topic or closely related themes are invited. Interested persons should submit a title and abstract to the Executive Secretary.

The session will run on August 17, 2011 from 0930 to 1630 UTC at the BIS headquarters on South Lambeth Road in London. The call for papers is available online. My own thinking is that a worldship is almost inevitable if we find no faster means of propulsion somewhere down the line. Imagine a future in which O’Neill-style space habitats begin to create a non-planetary choice for living and working. If we develop the infrastructure to make that happen, it’s not an unthinkable stretch to see generations that have adapted to this environment moving out between the stars.

Would their aim be colonisation of a remote stellar system? Perhaps, but my guess is that humans who have lived for a thousand years in a highly customized artificial environment may choose not to plant roots on the first habitable planet they find. They may explore it and study its system while deciding to stay aboard their familiar vessel, eventually casting off once again for the deep. In any case, worldships offer an interesting take on how we might make interstellar journeys relying not so much on startling breakthroughs in physics as steady progress in engineering and the production of energy. The London session should be provocative indeed.