Planetary Migration and a Smaller Mars

I’m sometimes asked why I write so seldom about Mars, a very interesting place indeed. The answer is that so many excellent sites are out there tracking events on the planet that I’m happy to keep my focus on the outer system and the starry gulf beyond. But now and then Mars news interrelates with broader stories about planet formation and what we might find in other solar systems. Such is the case with new work from Kevin Walsh (Southwest Research Institute) that looks at the migration of Jupiter during the formation of the Solar System.

At issue is the question of why Mars is so small, because if you run simulations of the planet formation process for the four inner planets of our system, you get a Mars that’s much heavier than the one we see. Tweaking the simulation parameters isn’t enough — it still doesn’t produce the smaller Mars. But a major migration scenario involving Jupiter can help to explain the situation. The trick is that it relies upon an initial distribution of solid material that had to have an outer boundary of about 1 AU, the current average distance of the Sun from the Earth.

That’s a well defined boundary, and it doesn’t fit well with either the asteroid belt (between 2 and 4 AU) or the current parameters of the outer system, including the Kuiper Belt. But numerical simulations have been able to show that both Saturn and Jupiter could have migrated at a time in the early system when gas was still present, moving not only inward but back out again. Such migrations could occur on timescales of as little as 100,000 years. Walsh explains the scenario:

“If Jupiter had moved inwards from its birth place down to 1.5 AU from the Sun and then had turned around because of the formation of Saturn, eventually migrating outwards towards its current location, it would have truncated the distribution of solids in the inner solar system at about 1 AU, as required to explain the small mass of Mars.”

Hydrodynamic simulations reproduce this inward, then outer movement, with Jupiter migrating inward to about 1.5 AU and subsequently moving to its present position, resulting in a truncated planetesimal disk ending at 1 AU. The terrestrial planets would have then formed from this disk over the ensuing 30 to 50 million years, producing planets consistent with Earth and Mars. 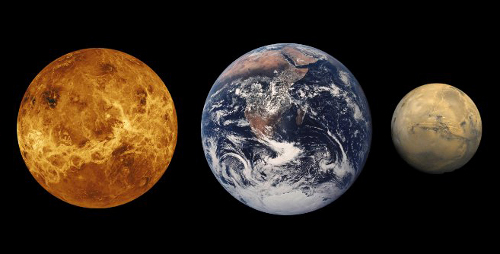 Image: An international team of scientists led by Dr. Kevin Walsh of Southwest Research Institute is using complex modeling techniques to better understand the formation of our solar system. The “Grand Tack Scenario” demonstrates that the gas giant Jupiter may have briefly migrated into the inner solar system and influenced the formation of Mars (right), stripping away materials that resulted in its relatively small size in comparison to Venus (left) and the Earth. Credit: NASA.

Walsh began this work while at the Observatoire de la Cote d’Azur (Nice), trying to figure out whether a migrating Jupiter, which would have had to pass through the 2-4 AU region, could be reconciled with the presence of the asteroid belt today. Not only did the simulations show the migration was consistent with the asteroid belt, but they actually helped to explain some features of the belt that have not been understood before. The planetary migration repopulated the asteroid belt with inner-belt objects that originally formed between 1 and 3 AU and outer-belt bodies that originated in and beyond the gas giant planets. Thus we gain insight into why the asteroid belt contains both extremely dry objects as well as bodies that are water-rich.

David O’Brien (Planetary Science Institute), a co-author on the paper, says “The asteroid belt, which was a priori our main problem, turned out to be the main strength of our model.” Walsh calls this model of the peripatetic Jupiter the ‘Grand Tack Scenario,’ likening the motion of the giant planet to a sailboat tacking around a buoy as it makes its great pivot at 1.5 AU. We wind up with a smaller Mars whose mass suggests a story of ancient planetary wandering, and we see a model of gas giant migration that may also give us insight into the kind of migrations that must have occurred in exoplanetary systems, where the orbital distance of gas giants varies widely.