The Froth at System’s Edge

Our Voyager spacecraft are in a fascinating place indeed, where the stream of charged particles flowing out from the Sun — the solar wind — bumps up against what we might call the ‘interstellar wind,’ the tenuous material expelled from other stars in our neighborhood. We’ve looked at the solar wind’s possibilities for propulsion many times, pondering whether it could push a ‘magsail’ at high velocity to the outer system, and whether such a push would be controllable (it looks to be a turbulent ride indeed). But new work reminds us that the Sun’s magnetic field lines are likewise pushed outward by the solar wind. Merav Opher (Boston University) comments:

“The sun’s magnetic field extends all the way to the edge of the solar system. Because the sun spins, its magnetic field becomes twisted and wrinkled, a bit like a ballerina’s skirt. Far, far away from the sun, where the Voyagers are, the folds of the skirt bunch up.”

We’re learning from those same Voyagers as they move through the boundary region at system’s edge that the distant magnetic field is a place where magnetic field lines re-orient themselves, forming bubbles approximately 160 million kilometers wide. At this distance, the bubbles have become self-contained structures disconnected from the solar magnetic field. They’re large enough — a bit larger than the Earth’s distance from the Sun — that it would take weeks for the Voyagers to cross even one of them. For those of you keeping count, Voyager 1 is now traveling at just over 17 km/sec relative to the Sun, while Voyager 2 is at 15.5 km/sec. 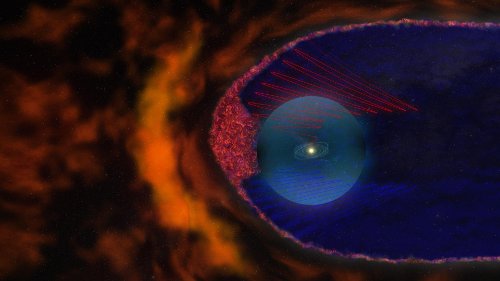 Once again Voyager overturns established ideas. The idea that the Sun’s magnetic field curved around to re-connect gracefully with the Sun now gives way at least partially to the idea of what University of Maryland physicist Jim Drake calls ‘a foam at the edge of the Solar System.’ What the Voyagers’ energetic particle sensor readings suggest is that the spacecraft are moving in and out of this foam in an area where the Solar System interacts with the rest of the galaxy. This region, the heliosheath, is our system border, and the characteristics of that border should affect how everything from galactic magnetism to cosmic rays fare as they try to enter the system.

Opher points out that the magnetic bubbles may be a major line of defense against galactic cosmic rays — sub-atomic particles accelerated to near light-speed — but we don’t yet have a handle on how efficient the bubble structure really is. Cosmic rays could become trapped inside the bubbles, but they may be too porous to maximize this effect. “We’ll probably discover which is correct as the Voyagers proceed deeper into the froth and learn more about its organization,” says Opher. “This is just the beginning, and I predict more surprises ahead.” With the Voyagers, we’ve learned to expect nothing less.

The paper is Opher et al., “Is the magnetic field in the heliosheath laminar or a turbulent bath of bubbles?” accepted by the Astrophysical Journal (preprint).