Asimov’s Vesta and Ours

With the Dawn spacecraft on its approach to Vesta, I’ve been scouting around for science fiction that involves this interesting asteroid. The one story that stands out is famous for its author more than its quality. It’s “Marooned Off Vesta,” which turns out to be Isaac Asimov’s first published story. John Campbell rejected it at Astounding Science Fiction, so it was left to Amazing Stories’ Ray Palmer to publish the Good Doctor’s first, written at the age of 18. “Marooned Off Vesta” appeared in Amazing’s issue of March 1939 and would have faded into obscurity if its author hadn’t gone on to his spectacular career in fiction and non-fiction. 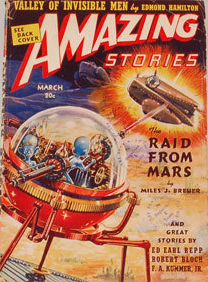 The era when Asimov didn’t make the cover of a magazine he was writing for didn’t last for long. I don’t particularly recommend you hunt this story down, although it appears (for sentimental reasons, I suppose) in 1973’s The Best of Isaac Asimov. Here a trio of space travelers in trouble look out at the surface of Vesta from their crippled craft. The dialogue positively clanks:

Brandon stared bitterly at the globe that filled almost the entire porthole, so Moore continued, “Watching Vesta won’t do you any good either.”

Mike Shea lumbered up to the porthole. “We’d be safe if we were only down there on Vesta. There’re people there. How far away are we?”

“Not more than three or four hundred miles judging from its apparent size,” answered Moore. “You must remember that it is only two hundred miles in diameter.”

“Three hundred miles from salvation,’~ murmured Brandon, “and we might as well be a million. If there were only a way to get ourselves out of the orbit this rotten fragment adopted. You know, manage to give ourselves a push so as to start falling. There’d be no danger of crashing if we did, because that midget hasn’t got enough gravity to crush a cream puff.”

Suffice it to say that “Marooned Off Vesta” is a bit of a slog. Nonetheless, the problem — how to get their shattered vehicle to safety using the limited supplies aboard the ship, is the heart of a tale whose problem solving and analysis of the physics involved reminds me of countless, more sophisticated works by a mature Asimov.

The embedded video below takes us to the post-Asimovian present. We can imagine Asimov’s crew looking out of their porthole at something vaguely like this. The video is actually a looping set of 20 images from Dawn taken for navigation purposes on June 1. One pixel here corresponds to 45 kilometers on the asteroid’s surface — the resolution approaches our best Hubble images of Vesta. Note the dark feature, about 100 kilometers in diameter, near the asteroid’s equator. It will be thrilling to see things like this resolve as Dawn draws ever closer to its rendezvous.

Dawn’s other target is Ceres, which it will travel to after completing its Vesta mission in 2012. Unlike Vesta, Ceres has a robust history in science fiction, from early tales like Garrett Serviss’ Edison’s Conquest of Mars (1898) through Larry Niven’s Known Space stories and novels like Joe Haldeman’s Buying Time (1989) and Bob Shaw’s The Ceres Solution (1981). The two asteroids could not be more different. Vesta has a differentiated structure, perhaps built around once radioactive materials in its core. We have much to learn about the place, but current thinking is that a layer of frozen lava covers deeper layers of rock and an iron/nickel core. The Vestoids, asteroids with similar orbital properties to Vesta, may have been created in the same impact that created a huge crater on Vesta’s south side, an event that also produced meteorites whose mineralogical composition leads researchers to associate them with Vesta.

Ceres, on the other hand, reminds us how much variety exists in the asteroid belt (a fact that Kevin Walsh offers an interesting hypothesis about in his current work on planetary migration). Ceres is larger than Vesta and almost spherical, with a density low enough to make it unlikely to have a metallic core. It’s now believed that Ceres is a cold body that never experienced internal heating. Frozen and perhaps liquid water — conceivably in copious amounts — may lurk below its surface, and there are some indications of frozen polar caps that evaporate in summer. The two asteroids are survivors of the planet-formation process, frozen in their development for 4.5 billion years. Dawn will be giving us a priceless look at the Solar System’s earliest era.