Although we talk about space-based observatories ‘discovering’ planets, the actual process is much more complex. Data from CoRoT, for example, must be validated carefully to make sure that what is being observed is actually a planet. That means turning to follow-up observations by ground-based telescopes, so that the whole package of photometric and spectroscopic data can confirm the planet and help us understand the system in which it orbits. New results from the Second CoRoT Symposium in Marseille are in, adding another 10 planets to CoRoT’s roster. 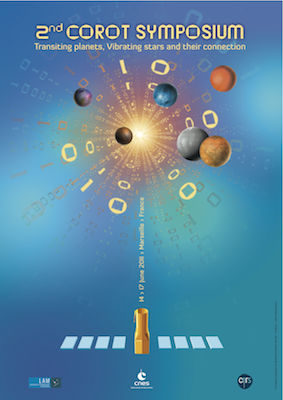 Thus we get seven ‘hot Jupiters,’ a planet smaller than Saturn (CoRoT-22b), and a pair of Neptune-mass planets (CoRoT-24b and CoRoT-24c) orbiting the same star. These gaseous planets come in a wide range of densities, from one that is roughly as dense as Saturn to higher densities comparable to Mars. It’s also an interesting mix in terms of age. CoRoT-17b is, at 10 billion years, twice as old as the Sun, while CoRoT-18b is still a juvenile at 600 million years. And we have two planets (CoRoT-16b and CoRoT-20b) on highly elliptical orbits, posing questions about the long-term survival of such orbits.

“Although the study of exoplanets is relatively young, we have already reached a stage where we can characterise the details of worlds orbiting other stars, and CoRoT is making a crucial contribution to this field. With hundreds of systems observed to date, we no longer have to worry about ‘taming the beasts’ and we can dedicate our efforts to the ‘zoology’ of exoplanets, which is enormously enhancing our knowledge about planetary systems.”

Zoology indeed, a careful process of classification and analysis that we have only begun on the exoplanet front. CoRoT has now found 26 confirmed extrasolar planets, with 401 planet candidates still in the process of confirmation. While the transit data from the space observatory can measure the radius of a planet, the measurement of the planet’s mass requires ground observations using the Doppler method. We can look with great satisfaction at the results of missions like CoRoT even as we ponder the kind of space observatories we’ll need in the future, when our attention turns to nearby stars in the hopes of studying planetary atmospheres. Think TESS and PLATO, for starters.