We’ve certainly gotten our money’s worth out of the spacecraft once called ‘Deep Impact.’ A mission designed for close study of a comet (Tempel 1) winds up making extrasolar planet investigations in an extended mission called EPOCh (Extrasolar Planet Observations and Characterization), sends back imagery of the Earth and its moon that deepens our knowledge of terrestrial world observations, and flies by another comet, Hartley 2, in its DIXI phase (Deep Impact Extended Investigation ). Add it all up and you get the combined acronym EPOXI.

Have a look at the range of comets that have been studied by spacecraft thus far: 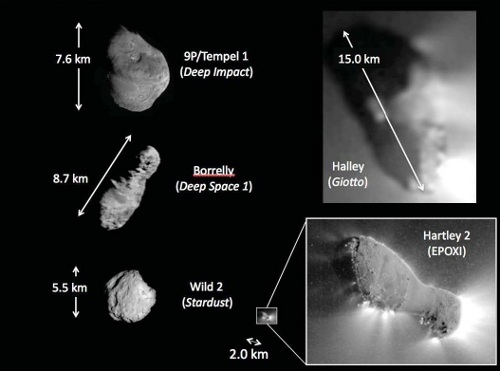 Now we have further analysis of the Hartley 2 flyby, which occurred last fall, with a paper in Science that draws on an imaging period that totalled almost three months, compiling more than 117,000 images and spectra of the comet. Scientists are now referring to the object in terms that make it sound more like a young colt — or a crafty baseball pitcher — than an ancient relic of the Solar System. Thus EPOXI project manager Tim Larson (JPL):

“From all the imaging we took during approach, we knew the comet was a little skittish even before flyby. It was moving around the sky like a knuckleball and gave my navigators fits, and these new results show this little comet is downright hyperactive.”

This is an important point because it would mean that the material on the waist is not primordial but evolutionary:

“We think the waist is a deposit of material from other parts of the comet, our first evidence of redistribution on a comet,” said University of Maryland Astronomer Jessica Sunshine, who is deputy principal investigator for the EPOXI mission. “The most likely mechanism is that some fraction of the dust, icy chunks, and other material coming off the ends of the comet are moving slowly enough to be captured by even the very weak gravity of this small comet. This material then falls back into the lowest point, the middle.” 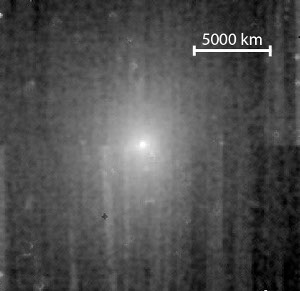 In the case of Hartley 2, we’re looking at a comet that spins around one axis and tumbles around another, a place where glittering blocks that can reach 50 meters in height and 80 meters in width — and whose nature is still undetermined — dot the larger, rougher ends, and are two to three times more reflective than the surface average. Still another surprise was the increase in cyanogen (CN) gas in the comet’s coma — 10 million times more CN gas was given off in one nine-day period in September than would have been expected. Lucy McFadden (NASA GSFC) comments on what scientists are calling the ‘CN anomaly’:

“We aren’t sure why this dramatic change happened. We know that Hartley 2 gives off considerably more CN gas than comet Tempel 1, which was studied earlier by a probe released by the Deep Impact spacecraft. But we don’t know why Hartley 2 has more CN, and we don’t know why the amount coming off the comet changed so drastically for a short period of time. We’ve never seen anything like this before.”

Image: A large, diffuse cloud of CN gas surrounds the nucleus of Hartley 2 in this image from NASA’s EPOXI mission. The gas forms a cloud of more than 200,000 kilometers (about 124,000 miles) in radius, compared to the comet’s size of about 2 kilometers (1.24 miles). Credit: NASA/JPL-Caltech/UMD.

You may recall from an earlier article here that Jessica Sunshine, referred to earlier, is principal investigator for the proposed Comet Hopper mission, one of the recent finalists for selection in NASA’s Discovery Program. Hartley 2 is demonstrating how much we still have to learn about how comets behave. Other comets known to be as ‘jumpy’ as this one are presumably driven by carbon dioxide or carbon monoxide, but we don’t know whether these represent a separate class of comets or simply reflect a continuum of cometary activity that will become clear with more observation, one reason why Sunshine would like to land a moveable probe on another comet (46P/Wirtanen), observing changes on the comet as it moves closer to the Sun.

It’s also fascinating that the smaller end of comet Hartley 2 seems to release twice the amount of carbon dioxide relative to the amount of water released as the large end, perhaps a reflection of a difference in composition between the two ends that has been there since formation. Observations from the ground can follow up the EPOXI results to continue the study of Hartley 2’s rotation and the variations in the gas and dust that surround the comet. As to Comet Hopper, we’ll have to wait for NASA’s 2012 review to see whether it or one of the alternatives — Titan Mare Explorer or the GEMS mission to Mars — will be the mission chosen to fly.

Previous post: A Look Inside the 100 Year Starship Idea