The latest work involving Cassini’s Cosmic Dust Analyzer (CDA) gives us fresh information about Saturn’s intriguing moon Enceladus and the likelihood of an internal ocean there. You’ll recall that plumes of water vapor and grains of ice have been found spewing from the ‘tiger stripe’ fractures at the moon’s southern pole, feeding material to Saturn’s E ring. Three times during the spacecraft’s passes through the plumes of Enceladus in 2008 and 2009, the CDA measured the composition of plume grains. Some of these icy particles struck the detector moving at speeds of up to 17 kilometers per second, vaporizing them on impact. The particle constituents could then be separated for close study. 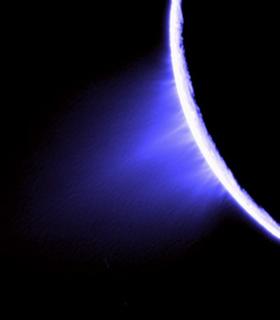 What we find is that the ice grains most distant from Enceladus are poor in ice and match the composition of Saturn’s E ring. But move closer to the moon and large, salt-rich grains begin to appear. If the plumes came only from surface ice, we would expect little salt rather than the ‘ocean-like’ composition of the salt-rich particles. That’s an interesting result indeed, says Frank Postberg ( Universität Heidelberg), lead author of a study being published in Nature on June 23. “There currently is no plausible way to produce a steady outflow of salt-rich grains from solid ice across all the tiger stripes other than the salt water under Enceladus’ icy surface,” the scientist adds. And co-author Sascha Kempf (UC-Boulder) expands on the idea:

“The study indicates that ‘salt-poor’ particles are being ejected from the underground ocean through cracks in the moon at a much higher speed than the larger, salt-rich particles. The E Ring is made up predominately of such salt-poor grains, although we discovered that 99 percent of the mass of the particles ejected by the plumes was made up of salt-rich grains, which was an unexpected finding. Since the salt-rich particles were ejected at a lower speed than the salt-poor particles, they fell back onto the moon’s icy surface rather than making it to the E Ring.”

The layer of water these researchers are talking about would lie perhaps as much as 80 kilometers below the surface crust, presumably kept in a liquid state by the tidal forces created not only by Saturn but by several neighboring moons, along with the heat of radioactive decay. A crack in the outermost crust exposes some of this water to space, causing flash-freezing into salty ice grains along with accompanying water vapor. The scientists’ calculations show that the liquid ocean must have a sizable evaporating surface or the plumes would freeze over. About 200 kilograms of water vapor are lost every second from the plumes, along with smaller amounts of ice grains.

Enceladus is but a single moon, but what it seems to be telling us is that icy bodies orbiting gas giants may sustain large amounts of liquid water, a finding of obvious interest to astrobiologists. As for Enceladus itself, the paper’s abstract notes that “Whereas previous Cassini observations were compatible with a variety of plume formation mechanisms, these data eliminate or severely constrain non-liquid models and strongly imply that a salt-water reservoir with a large evaporating surface provides nearly all of the matter in the plume.”

The paper is Postberg et al., “A salt-water reservoir as the source of a compositionally stratified plume on Enceladus,” published online 22 Jun 2011 in Nature (abstract).