We’ve often speculated about the potential uses of the solar wind in pushing a ‘magsail’ to high velocities for missions beyond the Solar System. This isn’t solar sailing of the conventional type, in which the transfer of momentum from solar photons is the operating force. Instead of photons, a magsail would rely on the solar wind’s stream of charged particles, which can reach speeds of up to 800 kilometers per second. One problem, of course, is that the solar wind varies hugely, variations that might make managing a magsail a daunting task. In any case, before we can contemplate such missions, we have much to learn about how the solar wind operates.

Not all of that work is going to focus on our own Sun. We’re also learning how stellar winds operate in other star systems through careful observation, as new work from the European Space Agency’s XMM-Newton space observatory reminds us. The spacecraft recently observed a flare during a scheduled 12.5-hour observation of a system known as IGR J18410-0535, where a neutron star and a blue supergiant are in close proximity. The flare, which at X-ray wavelengths was almost 10,000 times the star’s normal brightness, resulted from the neutron star trying to absorb an enormous clump of matter flung from its companion.

Enrico Bozzo (University of Geneva) says the flare was the result of ‘a huge bullet of gas that the star shot out,’ one that hit the neutron star, causing the gas in the clump to be heated to millions of degrees. Although expelling matter into space is a normal part of the stellar wind for all stars, the intensity of this particular X-ray flare shows that the blue supergiant star can release chunks of gaseous matter so large that most of it didn’t even hit the neutron star.

Without the nearby neutron star, such an event would not have been detectable from Earth, but with its help we can gain insight into the varied behavior of stellar wind patterns. The XMM-Newton spacecraft recorded the flare as lasting four hours, allowing astronomers to estimate the size of the clump of matter at some 16 million kilometers across, about 100 billion times the volume of the Moon, though containing only about 1/1000th of the Moon’s mass. The neutron star, thought to be about 10 kilometers in diameter, is the collapsed core of a once far larger star, now so dense that it generates a strong gravitational field. It now proves to be a useful detector for a stellar event of the kind we should be able to observe in other such systems.

We’ve taken useful measurements of our own star’s solar wind through the Ulysses and Advanced Composition Explorer spacecraft, not to mention the continuing work of our Voyagers as they study the solar wind’s behavior at the edge of the Solar System. Even with our own relatively stable star, we’ve learned that the solar wind is turbulent, with streams of material moving at different speeds and colliding to produce so-called Co-rotating Interactive Regions. Slower moving winds tend to come from regions overlying sunspots, while high-speed winds are associated with coronal holes, dark coronal regions often found at the Sun’s poles. 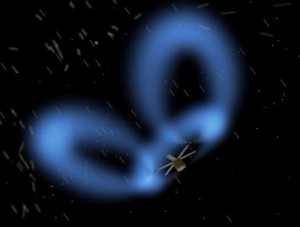 A slow-moving stream pushed by faster material behind it can produce shock waves that accelerate solar wind particles to high speeds, buffeting the Earth’s magnetic field and producing storms in our planet’s magnetosphere. We also find magnetic clouds produced when solar eruptions carry material off the Sun along with embedded magnetic fields (for more on all this, see this useful MSFC page on the solar wind). Now imagine trying to ride this wind using a magnetic bubble hundreds of kilometers in diameter — formed by injecting plasma into a magnetic field — as envisioned in Robert Winglee’s Mini-Magnetospheric Plasma Propulsion idea. Or take the idea a step further still, using a magsail to decelerate an interstellar probe by braking against the destination star’s stellar wind. The more we learn about how stars shed matter, the sooner we’ll discover how practical some of these concepts really are.

Image: Artist’s impression of a mini-magnetosphere deployed around a spacecraft. Plasma or ionized gas is trapped on the magnetic field lines generated onboard, and this plasma inflates the magnetic field much like hot air inflates a balloon. Credit: Robert Winglee.

Can magsails get their push from something other than the highly changeable solar wind? Dana Andrews (Andrews Space) has argued for some time that a magnetic sail could be pushed by a neutral plasma beam. That paper makes for fascinating reading. It’s “Interstellar Propulsion Opportunities Using Near-Term Technologies,” in Acta Astronautica Vol. 55 (2004), pp. 443-451. Robert Winglee (University of Washington) developed the Mini-Magnetospheric Plasma Propulsion concept in Phase I and II studies for NIAC. The Phase II study, “Mini-Magnetospheric Plasma Propulsion, M2P2” is particularly useful (full text). It is only one of a number of magsail concepts being investigated in the literature.