If you’re trying to figure out how fast a gas giant rotates, you have your work cut out for you. Jupiter seems to present the easiest case because of the famed Red Spot, first observed by the Italian astronomer Giovanni Cassini. But gas giants are thought to have a relatively small solid core, one that is completely obscured by their atmospheres. Rotation involves atmospheric effects as the gases slosh and swirl. No wonder astronomers were glad to find Jupiter’s pulsating radio beams, discovered in the 1950s. Rotation of the planet’s inner core results in a magnetic field that produces these signals, offering our best estimate on the planet’s actual rate of rotation.

We now know that the largest of the planets is also the fastest rotating, completing one rotation every 9.9 hours. But even this turns out to be an average because the gaseous nature of the planet causes it to experience differential rotation. Head for the poles and you find a slightly slower rotation period than you do at the equator. The rotation speed of the Jovian magnetosphere is usually the rate cited, but Jupiter teaches how tricky gas giants can be. The equatorial bulge caused by its swift rotation even makes it tricky to measure the planet’s diameter, which will vary depending on whether you measure it from the equator or the poles.

The Problem with Neptune

University of Arizona planetary scientist Erich Karkoschka had to keep such issues in mind when he went to work on the rotation rate of Neptune, another planet whose surface is shrouded by a thick atmosphere. The scientist went on to analyze publicly available images of Neptune from the Hubble Space Telescope archive, studying 500 of them to record details of the atmosphere and track distinctive features over long periods of time. Two features in Neptune’s atmosphere drew his attention, rotating five times more steadily even than Saturn’s hexagon, an atmospheric feature previously thought to be the most regularly rotating feature of any of the gas giants.

The two Neptunian features are known as the South Polar Feature and the South Polar Wave, and the odds favor their being vortices in the atmosphere similar to Jupiter’s Red Spot. Using the Hubble imagery, Karkoschka was able to track them over the course of twenty years. He arrived at a rate for Neptune’s rotation that he believes to be 1,000 times better than earlier estimates. The regularity was remarkable: Both features appear exactly every 15.9663 hours, with less than a few seconds of variation. The regularity suggests these features have some kind of connection to Neptune’s interior, possibly the result of convection driven by warmer and cooler atmospheric areas, but at this point, the exact process remains to be determined. 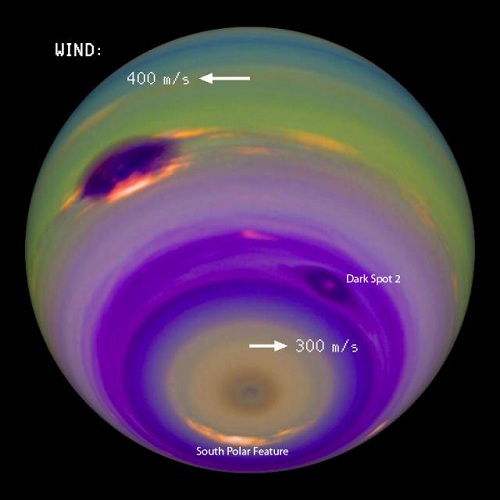 Image: In this image, the colors and contrasts were modified to emphasize the planet’s atmospheric features. The winds in Neptune’s atmosphere can reach the speed of sound or more. Neptune’s Great Dark Spot stands out as the most prominent feature on the left. Several features, including the fainter Dark Spot 2 and the South Polar Feature, are locked to the planet’s rotation, which allowed Karkoschka to precisely determine how long a day lasts on Neptune. (Credit: Erich Karkoschka).

Karkoschka’s next move was to home in on Voyager imagery from 1989, which offers resolution higher than the Hubble instrument, searching the area around the two identified features:

I discovered six more features that rotate with the same speed, but they were too faint to be visible with the Hubble Space Telescope, and visible to Voyager only for a few months, so we wouldn’t know if the rotational period was accurate to the six digits,” the scientist added. “But they were really connected. So now we have eight features that are locked together on one planet, and that is really exciting.”

We have a great deal to learn about the interiors of gas giants, but this work is a step in the right direction. We have a measure of Neptune’s total mass. What we lack is information on how it is distributed. Karkoschka again:

A bit closer to home than Neptune, Saturn reminds us how quickly adding to our data can overturn established estimates. Voyager 1 and 2 found radio signals as they flew past Saturn that could be clocked at exactly 10.66 hours, seemingly iron-clad evidence of the planet’s rotation period. Then Cassini arrived. And while we were all caught up in the visual splendor of the scenes the spacecraft sent back, its sensors were detecting a change in the period of the radio signal of about one percent that could not have been the result of a change in rotation. Cassini went on to discover that Saturn’s northern and southern hemispheres seemed to be rotating at different speeds, another puzzle to add to the gas giant rotation problem.

We thus learn that the radio signals originating with Saturn’s magnetic field are not quite as reliable as we had thought, lagging behind the planet’s core as the interior rotates and drags the magnetic field with it. The sloshing gases of the outer planets continue to confound us, though the work of Karkoschka and others is helping us to pin down the problem areas. The new work is also a splendid example of how much science can be done with publicly accessible data, items long filed away that are ripe for further analysis and may contain clues to such mysteries.

The paper is Karkoschka et al., “Neptune’s Rotational Period Suggested by the Extraordinary Stability of Two Features,” in press at Icarus (abstract).