When the German astronomer Johann Gottfried Galle discovered Neptune on September 23, 1846, he found a world so distant from the Sun that its orbit takes 165 years to complete. With Neptune reaching its first complete revolution since discovery, an event that occurred yesterday, we can enjoy some celebratory Hubble imagery of the planet. I especially like the shot below, which not only shows atmospheric features but also has been tweaked to reveal some of Neptune’s moons. The planet has about thirty moons, most of them too faint to appear in these images. 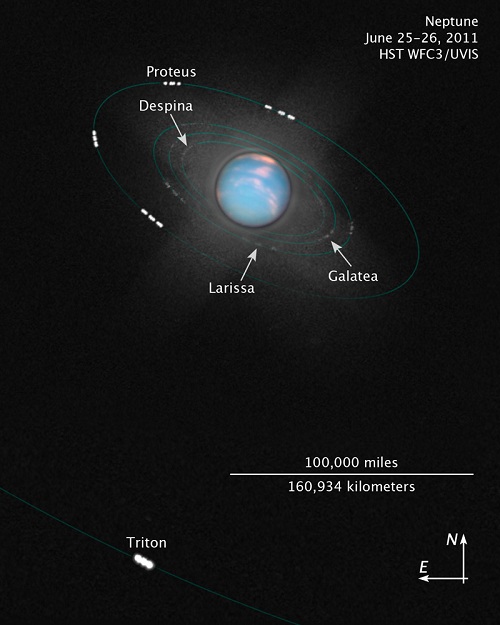 Image: This illustration was composed from numerous separate Hubble Wide Field Camera 3 images. A color image composed of exposures made through three color filters shows the disk of Neptune, revealing clouds in its atmosphere. Forty-eight individual images from a single filter were brightened to reveal the very faint moons and composited with the color image. The white dots are Neptune’s inner moons moving along their orbits during Hubble’s observations. The solid green lines trace the full orbit of each moon. The spacing of the moon images follows the timing of each Hubble exposure. Triton, in the lower left corner, is the brightest of the moons seen in these images, farthest from the planet, and moves in a counter-clockwise sense in this view. Next closest to Neptune is Proteus, followed by Larissa, Galatea and Despina, all of which move clockwise in this view, opposite to Triton’s (retrograde) motion. Credit: NASA, ESA, and the Hubble Heritage Team (STScI/AURA). 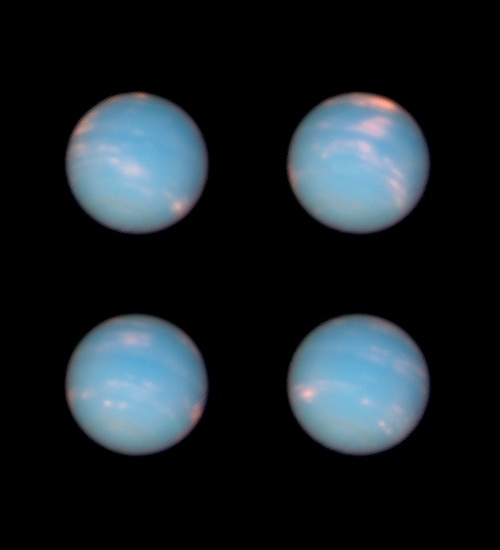 Image: In the Hubble images, absorption of red light by methane in Neptune’s atmosphere gives the planet its distinctive aqua color. The clouds are tinted pink because they are reflecting near-infrared light. A faint, dark band near the bottom of the southern hemisphere is probably caused by a decrease in the hazes in the atmosphere that scatter blue light. The band was imaged by NASA’s Voyager 2 spacecraft in 1989, and may be tied to circumpolar circulation created by high-velocity winds in that region. The temperature difference between Neptune’s strong internal heat source and its frigid cloud tops, about minus 260 degrees Fahrenheit, might trigger instabilities in the atmosphere that drive large-scale weather changes. Credit: NASA, ESA, and the Hubble Heritage Team (STScI/AURA).

The story of Neptune’s discovery is a fascinating topic in itself. Galileo actually recorded Neptune in his notebooks but didn’t follow up the observation. British astronomer William Herschel would later note that the orbit of Uranus did not behave as expected according to Newton’s laws, leading to speculations (like those of French astronomer Alexis Bouvard in 1821) that another planet was tugging at Uranus. Both Urbain Le Verrier and John Couch Adams predicted the location of the putative planet in the 1840s, but it was Le Verrier who described his prediction to Galle at the Berlin Observatory. After that, it was a matter of two nights of observation before Galle was able to identify the planet. Although the Royal Society would award Le Verrier the Copley Medal for his work, supporters of Adams defended his right to be considered a co-discoverer. Recent work has cast doubt on the idea.

Neptune makes numerous appearances in science fiction, such as Samuel Delany’s Triton (1976) and Jeffrey Carver’s Neptune Crossing (1994), in both of which much of the action takes place on Neptune’s largest moon. But earlier appearances are interesting, including Olaf Stapledon’s Last and First Men (1930), in which the planet serves as humanity’s final home. H.G. Wells likewise wrote about Neptune in ‘The Star’ (1897), a short story in which the planet is destroyed by a collision with what appears to be a rogue wandering planet from the interstellar deep. The event puts a brilliant new star in Earth’s sky, one that inexorably approaches our planet. Interestingly, the massive new object now gets a gravitational assist from Jupiter, as foreseen by a canny mathematician who forecasts the end of the human race: 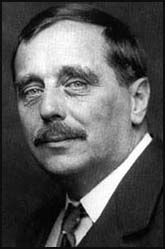 The new planet and Neptune, locked in a fiery embrace, were whirling headlong, ever faster and faster towards the sun. Already every second this blazing mass flew a hundred miles, and every second its terrific velocity increased. As it flew now, indeed, it must pass a hundred million of miles wide of the earth and scarcely affect it. But near its destined path, as yet only slightly perturbed, spun the mighty planet Jupiter and his moons sweeping splendid round the sun. Every moment now the attraction between the fiery star and the greatest of the planets grew stronger. And the result of that attraction? Inevitably Jupiter would be deflected from its orbit into an elliptical path, and the burning star, swung by his attraction wide of its sunward rush, would “describe a curved path” and perhaps collide with, and certainly pass very close to, our earth. “Earthquakes, volcanic outbreaks, cyclones, sea waves, floods, and a steady rise in temperature to I know not what limit”–so prophesied the master mathematician.

‘The Star’ is still a good read (Wells’ Martians even make an appearance). You can read it online here, an enjoyable way to celebrate Neptune’s first full year since discovery.

Next post: A Binary System on the Edge of Merger