A Shield from Stellar Eruptions?

We don’t know whether life can exist on a planet circling a red dwarf, but as reported in these pages frequently in the last few years, there have been studies showing that liquid water could persist on the surface of such planets despite the fact that they would most likely be tidally locked, with one side always facing their star. So the potential is there, but we also have to account for flare activity and the question of how life might adapt to it. Perhaps there are protective mechanisms that might shield such planets from the worst such eruptions, a possibility now raised by Ofer Cohen (Harvard-Smithsonian Center for Astrophysics).

Cohen and team have recently gone to work on planets of a far different kind — hot Jupiters crowded up in tight orbits around more Sun-like stars — but the work on gas giants is intended to lead on to a close look at red dwarf planets in similar proximity to violent stellar events. Until that study is complete, we can learn from their work on what happens when a coronal mass ejection (CME) hits a nearby planet. A CME pumps billions of tons of electrically charged hot gas into the Solar System, an event that can cause major disruptions to the Earth’s magnetosphere. It was a CME and ensuing geomagnetic storm that blacked out large regions of Quebec back in 1989.

Much tamer phenomena are likewise markers for solar activity, as anyone who has been fortunate enough to experience the Northern or Southern Lights already knows. My first encounter with the Northern Lights was in Iowa back in my college days, when the northern sky one night seemed to mimic a huge open window with gauzy white curtains being blown by the wind. It was an eerie, though not colorful, phenomenon, and I heard at the time that the lights were fairly rare at our comparatively low latitude. Years later in Iceland I would get the Northern Lights in technicolor one late October, a stunning display that had me standing speechless looking out over Reykjavik’s docks at the rippling and ever changing stream of colors.

Cohen’s work on aurorae shows that distant hot Jupiters should experience the same phenomena, though peaking at 100 to 1000 times the brightness of what we see on Earth. When a Coronal Mass Ejection hits a gas giant just a few million miles from its star, the planet would be subject to extreme forces, feeling the concentrated might of the blast. The immediate effect would be a weakening of the planet’s magnetic shield. And as CME particles reaches the planet’s atmosphere, the auroral lights would manifest themselves first as a ring around the equator that would, in the course of six hours, move up and down toward the planetary poles. 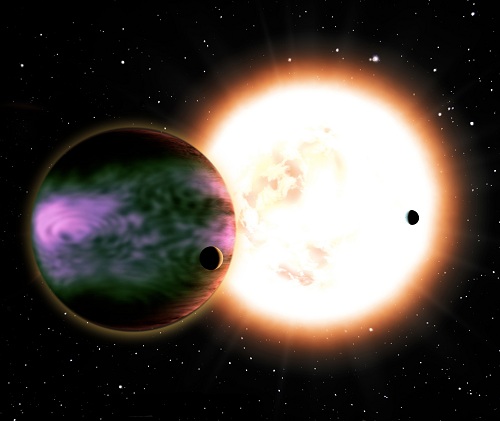 Image: This artist’s conception shows a “hot Jupiter” and its two hypothetical moons with a sunlike star in the background. The planet is cloaked in brilliant aurorae triggered by the impact of a coronal mass ejection. Theoretical calculations suggest that those aurorae could be 100-1000 times brighter than Earth’s. Credit: David A. Aguilar (CfA).

Remarkably, the hot Jupiter itself seems relatively well protected by its magnetic field. Cohen’s simulations show that the initial orientation of the planetary magnetosphere (which is elongated into a comet-like tail by the stellar wind) is almost perpendicular to the CME’s direction, with the result that the CME is modified in highly complex ways. But the key finding is that even in such extreme conditions, the planet’s atmosphere can be shielded from erosion. From the paper:

So a hot Jupiter gets pummeled by a CME, but the power of its protective mechanism is surprising, and as Cohen points out in this CfA news release, “…even a planet with a magnetic field much weaker than Jupiter’s would stay relatively safe.” How to extend such findings in the direction of stellar activity on red dwarfs and the consequent effect on planets there? We have much to learn, but perhaps this team’s continuing investigation in that direction will clarify whether discovering a planet in a red dwarf’s ‘habitable zone’ really does flag a potential for exoplanetary life.

The paper is Cohen et al., “The Dynamics of Stellar Coronae Harboring Hot-jupiters II. A Space Weather Event on A Hot-jupiter,” accepted by the Astrophysical Journal (preprint).