A Swarm of Probes to the Stars

Just how big does a spacecraft have to be to do productive work? It’s a provocative question in this era of CubeSats and downsized budgets, but when you start thinking interstellar, there are even more reasons to wonder how small you can make your vehicle. After all, the propulsion challenges facing interstellar missions are profound, and the more mass (including, of course, the fuel you’re carrying), the greater the problem. The rocket equation is telling, and one of the many things it tells us is that trying to reach a nearby star with a conventional rocket is out of the question, at least if you’re hoping to get your mission there in a reasonable century or so.

Mason Peck has been pondering issues like this for a long time. Those of you who are unfamiliar with his work at Cornell can catch up by reading earlier Centauri Dreams posts, but a more current solution is the article Exploring Space with Chip-sized Satellites, which runs in the current issue of IEEE Spectrum. In it, Peck looks at the way our probes have grown over the years, from the Herschel Space Observatory’s 3.5-meter telescope to Cassini’s 11-meter magnetometer boom, and goes on to discuss a far different idea: The creation of spacecraft the size of dust motes, probes that operate in swarms, with not just interplanetary but interstellar reach.

Spacecraft on a Chip

So instead of the Enterprise, let’s imagine a microchip 20 micrometers thick and weighing 7.5 milligrams. We’re talking about tiny solar sails — Peck calls these ‘Sprites’ — that would have the right ratio of surface area to volume to accelerate at about 0.06 mm/s2, making them about ten times faster than the Japanese IKAROS sail. Now we’re in range of interplanetary missions for tiny spacecraft that can carry a single sensor each. Think of each ‘chip probe,’ though, as just one node that operates along with a multitude of such chips to form a distributed sensor network in space.

Here’s one local use, as Peck explains in his IEEE Spectrum article:

We could, for instance, send tens of thousands of Sprites into orbits between Earth and the sun. These simple chips would have one task: to send a signal to Earth when the local magnetic field or the number of charged particles that hit the spacecraft exceeded some threshold. Taken alone, each chip would provide just one data point. But a network of these scattered chips could produce 3-D snapshots of space weather, something no traditional spacecraft, no matter how sophisticated, could ever do on its own. A payload of a million of the relatively heavy 50-mg version of the Sprite would amount to just 50 kilograms, about the mass of a single science instrument on one of NASA’s larger interplanetary spacecraft. So the launch costs of a Sprite network would be significantly lower than that of a traditional satellite. 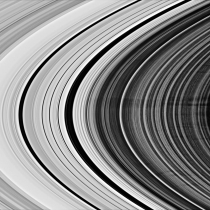 Peck is working on prototypes for such chips, about which more in a moment, but Centauri Dreams is drawn to the interstellar consequences of his work in the long-term. And on that score, today’s small chip prototypes point to an interesting propulsion option. For the Sprites are of such low mass that they should be able to take advantage of the magnetic fields around planets. The Lorentz force affects charged particles that move through a magnetic field, an effect that shows up in the famous ‘spokes’ that cut across Saturn’s rings, the result of the ionization of dust particles by virtue of sunlight and plasma effects and the consequent forces of the planet’s own magnetic fields on the ionized dust.

Now think about harnessing the Lorentz force around a still larger Solar System planet. Jupiter’s magnetic field is 20,000 times stronger than the Earth’s, and could be used as a natural particle accelerator. To do this, each Sprite would need an electric charge, easy enough to create with the help of plasma in a planetary environment (Peck has been testing the process at Cornell by exposing Sprite-sized objects to a stream of xenon plasma). A charged Sprite would use the Jovian magnetic field to accelerate itself in orbit, reaching thousands of kilometers per second, before turning off its onboard power supply, at which point the Lorentz force disappears and the spacecraft is hurled at high velocity out of the Solar System.

Time to Alpha Centauri? Perhaps a few hundred years, but that’s much faster than the best solar sail ideas, which have trouble reaching below a thousand years for the journey. And as with solar sails, we can also consider the possibility of using a laser assist to power the tiny sails to much higher velocities. Ten percent of the speed of light becomes possible in this scenario, and that gets you to Alpha Centauri space in a more than manageable forty-plus years.

All kinds of questions crop up in this work, not the least of which is the communications capability of the Sprite swarm, and issues of the environment the Sprites move through:

Sprites will also be far more vulnerable to damage than present-day spacecraft. Because they are lightweight and have solar cells built directly on the chip, Sprites can’t be equipped with radiation shielding to protect their electronics. This lack of shielding also makes the chip more vulnerable to impacts with micrometeorites, which zip at high speed throughout the solar system. Sprites could compensate for these hazards through sheer numbers; missions could be designed so that a significant fraction of the chips could be lost without dooming the operation.

But issues like these are also what Peck is working on both at Cornell and through experimentation at the International Space Station. There, Sprite prototypes have been mounted on the exterior of the ISS, each containing solar cells, a microprocessor with radio, an antenna and amplifier and the necessary switching circuitry. With little power to work with, the transmitters will produce only the weakest of signals, so the current work focuses on code-division multiple access (CDMA) techniques to help pull signal out of the noise. 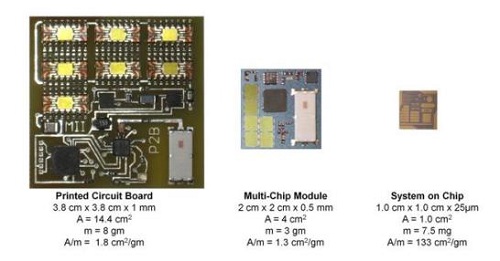 Image: There are currently two Sprite prototypes being tested: a Printed Circuit Board version and a Multi-Chip Module developed through a collaboration with Sandia National Laboratories. These are both traceable to an objective ‘System on Chip’ prototype. Credit: Mason Peck/Cornell University.

A Future in the Swarm

The overall project looks at the physics of tiny objects and the uses of mass production, and the concept echoes similar notions in play in the computing community:

The idea goes back at least 15 years, and it has its origins in “smart dust”—tiny microelectromechanical sensor systems that can be used to measure light and temperature, register movement and location, and detect chemical and biological substances. The notion of sending such systems into space was slow to gain momentum. But it began to take off once space researchers realized that integrated circuits had become quite inexpensive, dense, and easy to fabricate, and that almost everything a spacecraft needs can now be made with semiconductors alone: solar cells for power, capacitors for energy storage, and all the memory and processing capability you could want. As with smart dust, a diversity of payloads can be fabricated to ride on a chip, including basic spectrometers, load sensors to measure particle impacts, chemical sensors, and simple CMOS cameras. Researchers around the world, including groups at Surrey Space Centre, the University of Strathclyde, the Aerospace Corp., and the Jet Propulsion Laboratory, have explored the possibility of making chip-based spacecraft and are investigating their capabilities.

What a notion. We can couple these ideas with hoped-for advances in nanotechnology that may take Sprite concepts down to far smaller scales. I remember talking to Robert Freitas when writing Centauri Dreams (the book) about his idea of intelligent ‘needle’ probes, tiny interstellar craft spewed into the deep by the millions, each containing the assembler technology that would allow it to harvest local materials in a planetary system to build the necessary scientific station upon arrival.

Mason Peck’s Sprites would seem to have real possibilities here in the Solar System (imagine a swarm floating in the clouds of Titan to provide ongoing analysis of that distant world), and we can only speculate about their possibilities for interstellar missions. But moving out of the era of the huge space vehicle with gigantic fuel tanks into the realm of the miniature takes us in a direction that offers real potential for the kind of propulsion that could reach a nearby star. And as our work at nanotechnological scales advances in coming decades, we may learn how to solve some of the seemingly intractable communications problems such probes would face.