Vesta: A New World Being Revealed 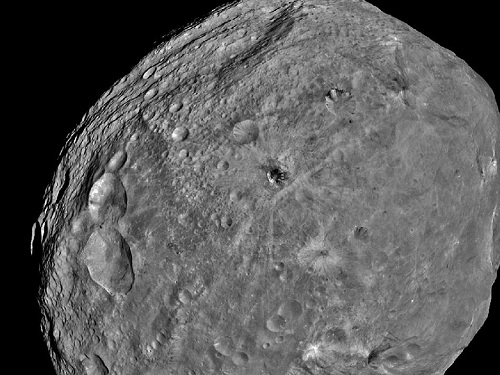 Image: NASA’s Dawn spacecraft obtained this image of the giant asteroid Vesta with its framing camera on July 24, 2011. Credit: NASA/JPL-Caltech/UCLA/MPS/DLR/IDA.

“We have been calling Vesta the smallest terrestrial planet. The latest imagery provides much justification for our expectations. They show that a variety of processes were once at work on the surface of Vesta and provide extensive evidence for Vesta’s planetary aspirations.”

We’re going to be learning quite a lot about both Vesta and Ceres from coordinated work between the spacecraft’s radio transmitter and Earth-bound antennae, which will be used to monitor signals from Dawn to detect variations in the asteroids’ gravity fields. The intent is to learn more about the interior structure of the two objects. We’ll also use Dawn’s visible and infrared mapping spectrometer to measure the surface mineralogy of both asteroids. Dawn’s first of four intensive science orbits of Vesta will begin on August 11 at an altitude of 2700 kilometers.

A spectacular view of the rotating Vesta is offered in the following video:

Image: In this movie, strung together from a series of images provided by the framing camera on NASA’s Dawn spacecraft, we see a full rotation of Vesta, which occurs over the course of roughly five hours. These images were obtained on July 24, 2011, from a distance of about 3,200 miles (5,200 kilometers).

And let’s close with a closeup of craters in the southern equatorial region: 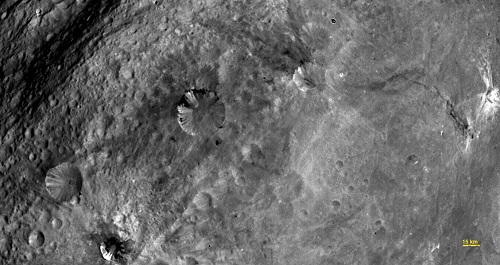 Previous post: A Swarm of Probes to the Stars