Juno: Into the Jovian Magnetosphere

The launch of the Juno spacecraft last Friday gets us back in business around the Solar System’s largest planet, but also has useful exoplanet implications. To understand why, consider just one of the instruments carried aboard the spacecraft. The Jupiter Energetic-particle Detector Instrument (JEDI) is designed to measure how energetic particles flow through Jupiter’s magnetosphere and interact with its atmosphere. Developed at Johns Hopkins Applied Physics Laboratory, JEDI will be looking at the interactions that produce the most powerful auroral phenomena in our system, and what we will learn has broad applications. 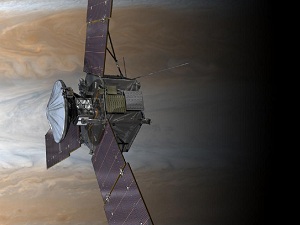 After all, new tools like the Low Frequency Array (LOFAR) are coming online, bringing hitherto unavailable sensitivity to radio frequencies below 250 MHz. Not so long ago, Jonathan Nichols (University of Leicester) proposed using LOFAR to look for aurorae similar to those on Jupiter in exoplanetary systems. In fact, his research shows that gas giants in orbits up to 50 AU might be detectable from Earth even if their host star is as far as 150 light years from our planet. That’s a useful addition to our toolkit, for gas giants in wide orbits take a long time to identify using radial velocity methods, which are much more sensitive to the massive tug of a closer in ‘hot Jupiter.’

Image: NASA’s Juno spacecraft is shown in orbit above Jupiter’s colorful clouds in this artist’s rendering. Juno will arrive at Jupiter in 2016 to study the giant planet from an elliptical, polar orbit. The spacecraft will repeatedly dive between the planet and its intense belts of charged particle radiation, coming only 5,000 kilometers (about 3,000 miles) from the cloud tops at closest approach. Credit: NASA/JPL-Caltech.

The first spacecraft designed explicitly for a magnetic mapping mission, Juno will be operating in a tough environment, one in which electrons, protons and ions are energized by the planet’s fast rotation. Other than the Sun, no other destination NASA has visited presents such radiation challenges. In this orbit, Juno will need to take advantage of a protective shield made of titanium to preserve its sensitive electronics. This ‘vault’ weighs about 200 kilograms and should dramatically extend the life of the spacecraft’s instruments. Juno will circle Jupiter’s poles for a year after arrival in the summer of 2016, the choice of orbit adding its own radiation protection — the spacecraft will spend little time in the intense radiation belts around Jupiter’s equator.

The elliptical orbit will bring Juno closer to the giant planet than any other spacecraft, its polar orbits covering the entire globe during the course of an Earth year. At its closest, the spacecraft will feel the full brunt of the magnetic field, some 10 to 12 Gauss (Earth’s field is about half a Gauss), while further out — Juno will range farther out than the orbit of Callisto — it should encounter a field 10 million times weaker. Each of its magnetometers is equipped with two star cameras to determine the sensor’s orientation in space, allowing exquisite accuracy in measurement. Variations in the magnetic field will help scientists visualize how the planet’s magnetic system operates and offer insight into the planetary dynamos of gas giants.

But back to the aurorae and how they are formed. Barry Mauk (JHU/APL) is lead investigator for JEDI:

“JEDI’s sensors will be trained on the higher-energy particles that help to generate Jupiter’s aurora, that heat and ionize Jupiter’s upper atmosphere, and that offer clues to the structure of Jupiter’s near-planet space environment. We really want to know what happens in the aurora that causes these particles to accelerate to such high energies, and Juno will be the first spacecraft to fly within the region where this acceleration actually takes place.”

The polar orbit will be traversed 33 times as the spacecraft uses JEDI and its eight other science instruments and numerous sensors to probe the atmosphere and magnetosphere while looking for signs of a solid planetary core. Steven Levin (JPL) explains how the polar orbiter will be able to do more than simply investigate Jupiter’s active aurorae:

“Mapping Jupiter’s magnetic field is one of the very few ways available to learn about Jupiter’s deep internal structure. That’s because Jupiter’s atmosphere is compressed so much by its powerful gravity field that it becomes impenetrable to most sensing techniques. In addition, Jupiter may be the best place in the solar system to study how planetary magnetic fields are generated.”

In addition to the science instruments, Juno carries three figurines onboard: A 1.5-inch likeness of Galileo Galilei, a statue of the Roman god Jupiter and one of his wife Juno. But a plaque dedicated to Galileo, also on the spacecraft, is what caught my attention. Provided by the Italian Space Agency, the diminutive plaque measures just 71 by 51 millimeters (2.8 by 2 inches) and is made of flight-grade aluminum with a weight of six grams. Bonded to Juno’s propulsion bay, the plaque depicts a self-portrait of the Italian astronomer and also includes a famous passage he wrote in 1610 recounting his observations of the giant planet and its largest moons:

“On the 11th it was in this formation — and the star closest to Jupiter was half the size than the other and very close to the other so that during the previous nights all of the three observed stars looked of the same dimension and among them equally afar; so that it is evident that around Jupiter there are three moving stars invisible till this time to everyone.”

Thus an account of the discovery of large Jovian moons is now on its way to the planet Galileo did so much to reveal to humanity. It’s also worth remembering that Juno will be equipped with three huge solar panels, making it the most distant probe ever to be powered by the Sun. Fully extended, the probe will be over 18 meters wide as it soaks up as many solar photons as possible from a distance of 800 million kilometers from the Sun. We’ll have to learn as much as we can from Juno in relatively short order, for the mission is designed to survive in its Jovian orbit for little more than a year.