On Habitable Worlds and Their Moons

One of the problems with building a backlog of stories is that items occasionally get pushed farther back in the rotation than I had intended. Such is the case with an article in Astrobiology Magazine that talks about how much of a factor a large moon may be in making a planet habitable (thanks to Mark Wakely for passing the link along). It’s an interesting question because some have argued that without our own Moon, the tilt of the Earth’s axis, its ‘obliquity,’ would move over time from zero degrees to 85 degrees, a massive swing that would take the Sun from a position over the equator to one where it would shine almost directly over one of the poles.

The resulting climate changes would be severe, potentially affecting the development of life. The thinking is that just as the direction of the tilt of a planet varies with time — astronomers say that it ‘precesses’ — so does the orbital plane of the planet. The gravity of a large moon like ours affords a stabilizing effect by speeding up the Earth’s rotational precession and keeping it out of synch with the precession of the planet’s orbit. When rotational and orbital plane precession are synchronized, the obliquity begins to change chaotically. The Moon’s job, then, is to keep the two out of synch, minimizing the kind of fluctuations that would play havoc with life on the planet. 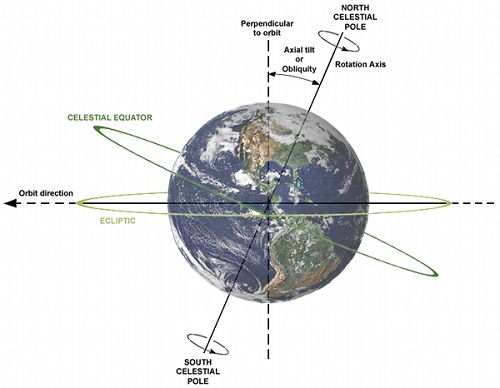 Image: The image shows Earth’s axial tilt (or obliquity), rotation axis, plane of orbit, celestial equator and ecliptic. Earth is shown as viewed from the Sun; the orbit direction is counter-clockwise (to the left). Credit: Wikimedia Commons/Astrobiology Magazine.

Jason Barnes (University of Idaho) and colleagues are behind the latest work (presented at the most recent American Astronomical Society meeting) which suggests another interpretation, arguing that the effect of the Moon on the Earth’s obliquity has been overstated — the Moon is not in fact crucial for the development of life. We can hope this bears out, because estimates of how many terrestrial planets will have a substantial moon get as low as one percent. Most of these worlds, then, under previous thinking, would experience huge changes in their obliquity, pointing toward a ‘rare Earth’ conclusion.

But that thinking is under challenge. Recent work by Sebastian Elser (University of Zurich) argues that the chances of large moons for such planets are as high as 10 percent. And Barnes’ team contrasts the gravitational effects of the Moon with those of other planets orbiting the Sun. The conclusion: The Moon does provide some stability to our planet, but the pull of Jupiter and, to a lesser extent, other planets orbiting the Sun would tend to keep the Earth’s obliquity swings in check. In fact, Barnes has determined that the Earth’s obliquity without a moon would vary only ten to twenty degrees over half a billion years. That’s enough to cause major climate changes, but it would “…not preclude the development of large scale, intelligent life,” Barnes adds.

I was intrigued by the team’s findings about planets with retrograde motion in their orbits. With or without a moon, the obliquity variations of a planet in this configuration — spinning in the opposite direction from their star — should be smaller than those orbiting in the same direction as the star. Barnes believes that the initial rotation direction of a planet should be random, voicing his suspicion that “whatever smacks the planet last establishes its rotation rate.” If this is true, the odds on retrograde precession are 50/50, lengthening the odds for relatively modest obliquity.

So we get help from the spin of a planet where it is retrograde, and also the combined gravitational effects of other planets in the system that help to reduce the planet’s tilt. If Barnes and team are right, then worlds lacking a large moon are still very much in the running for the development of life, a stability that he reckons may account for 75 percent of the rocky planets in the habitable zone. We’re a long way from confirming that idea, but it’s refreshing to hear this assertion that a large moon may not be a sine qua non after all, given how little we know about exoplanetary moons and the likelihood of their emergence in the right size range.