Entering the Age of Sail

I see that the new agenda for the 100 Year Starship Study symposium has now been posted. The meeting will be held in Orlando in about a month, set up along a number of parallel tracks from interstellar destinations to propulsion options and habitats, a wide-ranging set of sessions that will allow many in the far-flung interstellar community to exchange ideas in person for the first time. DARPA’s intention is to spur research and select an organization that will sustain and develop interstellar ideas over the next century, an exciting long-term prospect indeed.

That interstellar flight demands long-term thinking should be obvious given the state of propulsion research today. Over the last sixty years, numerous ideas on how to drive a vehicle to a substantial percentage of the speed of light have been advanced, but almost all of these remain no more than concepts in journals. We’re not remotely at the stage where we can choose a single option as the likely propulsion choice for development. Rather, we’re theorizing and experimenting and seeing where many different strands of thinking lead, all of which takes me to the solar sail. 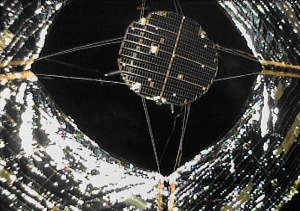 Jim Essig was kind enough to pass along a recent story in Science News dealing with current experimentation and planning on solar sail ideas. Here we’re dealing with a technology that, unlike almost all the other interstellar options, has actually flown, even if we’re still in the preliminary phases of evaluating the technology’s performance. One day it may be that we’ll push enormous sails with laser beams or microwaves, but for now we’re talking about small attempts to measure the effect of momentum transfer by solar photons to push a spacecraft.

The Japanese success with the IKAROS sail has been marvelous to watch as the 20-meter sail became operational in interplanetary space, demonstrating an innovative liquid crystal technology that allowed mission scientists to change the sail’s reflectivity and affect its course. Bear in mind that IKAROS is to be the first of a family of Japanese sails, the next model being 50-meters across and intended for launch to Jupiter and the asteroids. That mission will focus on propulsion systems that combine the solar sail with an ion drive for interplanetary journeys.

We’ve talked extensively in these pages about IKAROS as well as NASA’s NanoSail-D, the latter whimsically called LunchSat because the budget-strapped team could only find time to work on it during lunch. Nonetheless, the doughty engineers under Dean Alhorn built two 3-meter sails that fit into a CubeSat, attempting to launch the first without success because of the failure of the Falcon 1 rocket that would have taken it into space. The second was launched last November, went silent for weeks, and suddenly deployed and reported in for duty. Alhorn has now set his sights on a larger sail to follow on to NanoSail-D, which will re-enter the atmosphere within months.

The NASA effort had downsized since the days when the agency was testing two 20-meter x 20-meter solar sails at a research facility in Ohio [although see Jack Crawford’s comment below], but the fact that NanoSail-D could become operational is a testament to the enthusiasm of scientists working the mission. And the new sail possibility is a 38-meter x 38-meter sail demonstrator, as discussed in this news release from the Office of the Chief Technologist.

The Science News story is well worth your time for its encapsuled analysis of where we are in solar sail development. We now look toward the Planetary Society, where Lou Friedman brings his own extensive sail experience to the building of three potential designs. From the story:

Closest in concept to the original grand dreams about solar sailing, yet freighted with the memory of a recent failure, is the LightSail project of the Planetary Society. Friedman, its architect, has seen pretty much everything in the world of solar sailing; he worked on the original Halley proposal in the 1970s and spearheaded the society’s drive to fly a privately funded sail in the early 2000s. That effort, paid for mainly by an entertainment company led by Carl Sagan’s widow, ended with a splash in 2005 when the Russian rocket it was supposed to ride from a nuclear submarine failed to reach orbit.

After licking his wounds, Friedman decided to work with NanoSail-D in its initial stages. That restored his enthusiasm and inspired LightSail. “We got so interested in the design that we said we’ll go further: We’ll instrument the craft and build in attitude control and a telemetry system,” says Friedman. Thanks to CubeSats, the sail could be built for less money than the society’s last, failed attempt. 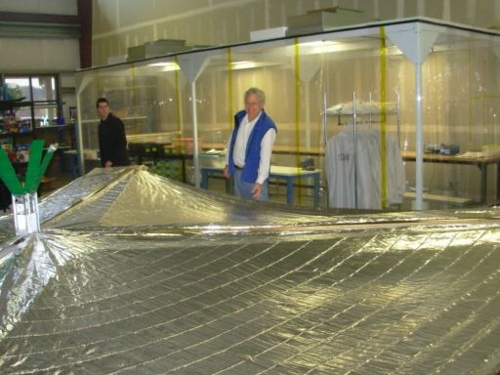 Like Alhorn’s NASA team, the Planetary Society is building two sails in case something goes wrong, and envisions future versions that will not only achieve higher Earth orbit but travel to the L1 Lagrangian point between the Earth and the Sun. Other sail projects to watch with interest include a consortium from the University of Surrey and aerospace firm Astrium, an aerospace subsidiary of the European Aeronautic Defence and Space Company (EADS) that is building a 5-meter sail for CubeSat deployment for launch some time in 2012. The same team is studying sails as a way to deorbit satellites, removing space debris that poses a collision hazard in orbit — this is also part of the thinking behind the NanoSail-D concept. 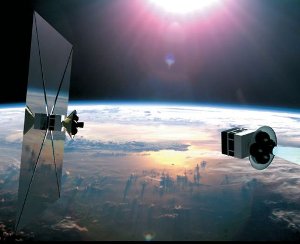 And we’re still not through. The German space agency DLR and the European Space Agency are working on a series of solar sails called Gossamer that would experiment with larger sails as technology demonstrators of increasing size and complexity, while engineers at the University of Illinois at Urbana-Champaign are studying new deployment methods that involve spinning deployment of sail blades that could one day lead to a spinning sail with rotating blades as large as 10 kilometers long. As Science News points out, what will move the solar sail idea forward is not just this early experimentation, but the follow-on missions that target specific tasks that are optimized for sails and defy other propulsion techniques. In such ways does a promisng space technology begin to get the shakeout in space it needs to mature.