Three Views from Outside

The key to a sane life is perspective. Or at least that’s how I feel when I see an image like the famous Apollo 8 shot of a gorgeous blue Earth rising over the barren, cratered Moon. Great images of the kind the space program deals up can change how we see everything — the Apollo 8 image is widely thought to have energized environmental and ecological thinking in its day. We also have a few striking images showing both the Earth and the Moon together. The one I always fall back on is the one below, a barren Moon with a living Earth swimming in black space. It was a departing gift from the Galileo spacecraft as it left on its long journey to Jupiter in 1989. 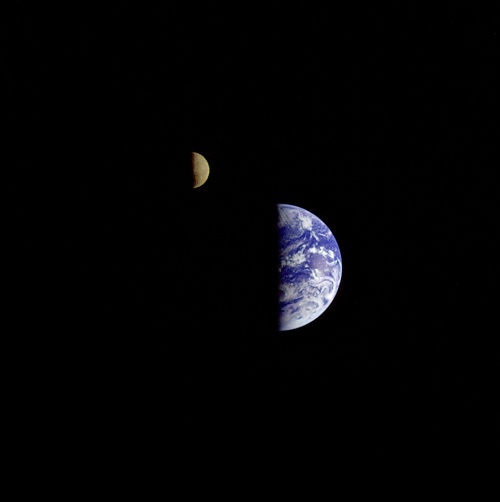 Image: On its way to Jupiter, the Galileo spacecraft looked back and captured this remarkable view of Earth and the moon. The image was taken from a distance of about 3.9 million miles. The brightly colored Earth contrasts strongly with the moon, which reflects only about a third as much sunlight as Earth. Contrast and color have been computer-enhanced for both objects to improve visibility. Antarctica is just visible through clouds (bottom). Credit: NASA.

Now we have an update of the scene, taken by Juno as it makes its own way to Jupiter. Juno managed the distance from the Earth to the Moon (just over 400,000 kilometers) in less than a day, but it will be another five years and 2,800 million kilometers before journey’s end, where the spacecraft will orbit the giant planet’s poles to study its magnetosphere and probe beneath the clouds. Right now the Juno team is conducting initial checks on spacecraft instruments following the August 5 launch. What we see below was the view from 9.66 million kilometers out. 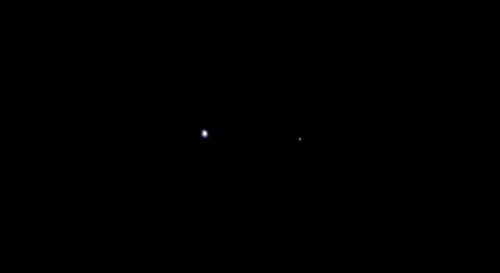 Image: This image of Earth (on the left) and the moon (on the right) was taken by NASA’s Juno spacecraft on Aug. 26, 2011, when the spacecraft was about 6 million miles (9.66 million kilometers) away. It was taken by the spacecraft’s onboard camera, JunoCam. The solar-powered Juno spacecraft lifted off from Cape Canaveral Air Force Station in Florida on Aug. 5 to begin a five-year journey to Jupiter. Image credit: NASA/JPL-Caltech.

We lack the detail of the Galileo image, of course, but the thrill is still there when you consider what we’re looking at. The Juno team seems no more immune to this than the rest of us:

“This is a remarkable sight people get to see all too rarely,” said Scott Bolton, Juno principal investigator from the Southwest Research Institute in San Antonio. “This view of our planet shows how Earth looks from the outside, illustrating a special perspective of our role and place in the universe. We see a humbling yet beautiful view of ourselves.”

Indeed. And while we’re on the subject, let’s not forget another unforgettable view, this one of the Earth and the Moon as seen from the EPOXI spacecraft.

EPOXI (the combined names for the two extended missions of the Deep Impact spacecraft) viewed the Earth/Moon system from almost 50 million kilometers out, the idea being to study how a life-bearing planet would appear to our instruments. Of course, to view a planet at this level of detail from another star system would require technology far beyond what we currently possess. But we’re looking seriously at near-future missions that might be able to pick out an Earth analogue as a single point of light that would change with time as the world rotated. All of this is part of the quest to identify habitable worlds. One day it will happen, but until then, watching that Moon move in front of the Earth is yet another perspective changer, one that leaves this writer a bit amazed no matter how many times he sees it.