A Jittery Problem for Kepler

We’ve been assuming all along that it would take the Kepler mission three years-plus to detect true Earth analogues, meaning planets orbiting Sun-like stars at about the Earth’s orbital distance. Now it turns out that figure may have to be extended, as this article in Nature makes clear. Author Ron Cowen points out that a close analysis of approximately 2,500 of the tens of thousands of stars in the Kepler field are flickering more than expected, and that spells trouble. 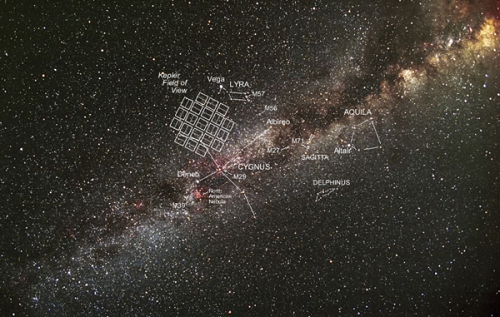 The reason: The dip in starlight signalling the presence of a planet can be masked by the unexpected noise in the Kepler data. As described by Kepler scientist Ron Gilliland (Space Telescope Science Institute), the signal of an Earth analogue — assuming a star much like the Sun — should be a drop of about 85 parts per million when the planet passes in front of its star, lasting a statistical average of 10 hours, and occurring once per year. Moreover, the signal would only be evident after three successive transits, equally spaced in time, had been observed.

But that assumption was made with luminosity fluctuations about the same as the Sun’s. The noise metric the Kepler team uses is called Combined Differential Photometric Precision, or CDPP, and according to Gilliland and colleagues in the paper on this matter, CDPP was intended to be about 20 ppm for dwarf stars at 12th magnitude. But CDPP turns out to be 30 ppm, 50 percent higher than expected. The paper goes on to demonstrate that most of the noise is intrinsic to the stars themselves rather than being the result of instrument problems.

Kepler… is the first mission capable of quantifying the variability of large numbers of stars to the small levels by which the Sun is known to vary. Kepler will continue to provide exciting new insights into the astrophysics of quiet stars, and their galactic distributions. While we are not surprised to have learned new things from this new observational capability, the fact that the stars are more variable than expected has a significant influence on the ability to readily detect Earth-analog planet transits where the expected signal per transit is only a few times the inferred noise level on comparable time scales. Observing for a longer time baseline can compensate for the loss of transit detection sensitivity from the higher than anticipated stellar noise.

A longer time indeed, the upshot being that Kepler will need not three but an average of six transits per planet to adequately verify that the change in starlight is actually a planet. Finding the Earth analogues among the Kepler stars, then, calls for an extended mission, and that will more than double the planned mission life of three and a half years. Cowen quotes Kepler chief data analyst Jon Jenkins as saying that while an overall eight year mission now seems necessary, the extension to the mission is by no means assured. After all, NASA’s budget problems include the costs of the James Webb Space Telescope, and Kepler could be squeezed out of the picture.

Magnetic activity on the Kepler stars may be the reason for the unexpected noise in the data, and if that is the case, it may be because the stars are young, thus spinning faster and feeding a more powerful magnetic field. That runs against predictions that most of the stars in the sample would be older than the Sun, but right now the cause seems less important than the need to get Kepler the extended mission it needs to actually tell us something about the distribution of Earth-like worlds in a large sample of stars. It would be outrageous if Kepler were to be shut down when it was just a few years away from answering such long-held questions, but at the moment NASA isn’t talking about Kepler’s chances. That decision will come next spring.

The paper is Gilliland, “Kepler Mission Stellar and Instrument Noise Properties,” accepted by the Astrophysical Journal (preprint). Thanks to Antonio Tavani for the original link to the Cowen article.

Previous post: If You’re Going to the Starship Conference…