With the online press conference re new results from the HARPS spectrograph (High Accuracy Radial Velocity Planet Searcher) now being discussed, I want to pause for a moment before getting into them to mention the ongoing Extreme Solar Systems II conference, which runs until the 17th at quite a venue, Jackson Lake Lodge in Wyoming. The tentative program is available online, with the welcome news of new HARPS and Kepler results and any number of intriguing talks on everything from debris disk imaging around nearby stars to core accretion models.

We’ll doubtless be talking about some of these findings in coming weeks. But for now, on to the HARPS discussion at the Wyoming conference. The take-away quote from today’s news was this, from Michel Mayor (University of Geneva):

“The harvest of discoveries from HARPS has exceeded all expectations and includes an exceptionally rich population of super-Earths and Neptune-type planets hosted by stars very similar to our Sun. And even better — the new results show that the pace of discovery is accelerating.”

Mayor is referring to more than 50 new exoplanets orbiting nearby stars, 16 of which are said to be super-Earths. One of them, HD 85512 b, is estimated to be on the edge of, if not within, its star’s habitable zone. Lisa Kaltenegger (Harvard Smithsonian Center for Astrophysics) points out that this world is the lowest-mass planet yet confirmed by radial velocity methods that is potentially in the habitable zone. It’s another triumph for the HARPS spectrograph, which has been shown to make the detection of planets below two Earth masses possible. More on HD 85512 b in HARPS: Hunting for Nearby Earth-like Planets, a Centauri Dreams story from August. 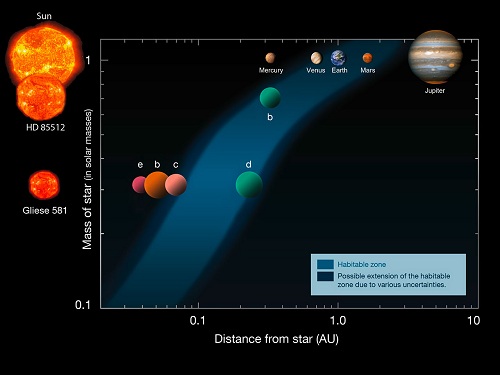 Image: A team of astronomers has shown that the newly discovered exoplanet HD 85512 b lies at the edge of the habitable zone of its star, where liquid water oceans could potentially exist if the atmosphere of the planet has sufficient cloud cover. This diagram shows the distances of the planets in the Solar System (upper row) in the new HD 85512 system (middle) and in the Gliese 581 system (lower row), from their respective stars (left). The habitable zone is indicated as the blue area. Based on an original diagram by Franck Selsis, Univ. of Bordeaux. Credit: ESO.

HD 85512 b is the second HARPS planet potentially inside the habitable zone, the other being the much discussed Gliese 581 d. And in addition to HARPS, which has found about ⅔ of all exoplanets with masses less than Neptune’s, we should put ESPRESSO on our radar. Echelle SPectrograph for Rocky Exoplanet and Stable Spectroscopic Observations is in its early design stage, but scheduled to begin operations on the ESO Very Large Telescope in 2016. Now we’re really getting down to cases: ESPRESSO will have a radial velocity precision of 0.35 km/h or less. Compare that to the 0.32 km/h that Earth induces on the Sun and you can see why astronomers look forward to using ESPRESSO to discover Earth analogues around nearby stars.

HARPS observations of 376 Sun-like stars are helping us firm up the likelihood of low-mass planets around such stars. The result: About 40 percent of them have at least one planet less massive than Saturn. And the majority of exoplanets of Neptune mass or less appear in systems with multiple planets. The paper is Mayor et al., “The HARPS search for southern extra-solar planets, XXXIV — Occurrence, mass distribution and orbital properties of super-Earths and Neptune-type planets.” Still in preparation, it is to be published in Astronomy & Astrophysics. And see Kaltenegger et al., “A Habitable Planet around HD 85512?” submitted to Astronomy & Astrophysics (preprint).

Next post: On Planets and What We Can See