I’m just back from a long trip and am only now catching up on some of the news stories from late last week. Among these I should mention the discovery of the world with the double sunset, identified through Kepler data and reminiscent of the famous scene from Star Wars, where Luke Skywalker stands on the soil of Tatooine and looks out at twin suns setting. I remember carping about the scene when it first came out because it implied a planet that orbited two stars at once. Now we have confirmation that such a configuration is stable and that planets can exist there.

Kepler-16 isn’t a habitable world by our standard definition, but much more like Saturn, cold and gaseous. One of the stars it circles is a K dwarf of about 69 percent the mass of our Sun, while the other is a red dwarf of about 20 percent solar mass. Some 220 light years away in the direction of the constellation Cygnus, the system is fortuitously edge-on as seen from Earth, allowing Kepler scientists to identify the transits of the planet orbiting both stars. So we have two stars and one planet all eclipsing each other, with the planet’s gravity affecting the precise timing of the stellar eclipses. And each transit occurs at a different orbital phase of the inner star. 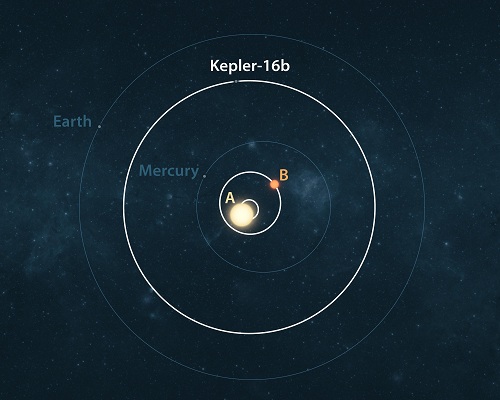 Image: This artist’s conception illustrates the Kepler-16 system (white) from an overhead view, showing its planet Kepler-16b and the eccentric orbits of the two stars it circles (labeled A and B). For reference, the orbits of our own solar system’s planets Mercury and Earth are shown in blue. Though the planet orbits its star from a distance comparable to that of Venus in our own solar system, it is actually cold. This is because its two parent stars are both smaller than the sun and don’t give off as much heat. Credit: NASA/Ames/JPL-Caltech.

This is obviously demanding work, but the existence of tertiary and quaternary eclipses at irregular intervals demonstrated the changing position of the two stars as each planetary transit occurred. Researchers were then able to uncover a planetary orbital period of 229 days, while the stellar binary is in a 41-day orbit. It’s interesting to note that the smaller of the two stars is also the smallest low-mass star to have its mass and radius measured at such high precision. The issue of precise stellar measurements is one we’ll return to soon as we look at a paper pointing out how difficult the measurement of stellar radii can be when dealing with M-dwarfs, a fact that has a bearing on what we can deduce about the exoplanets found orbiting them.

Kepler principal investigator William Borucki points out in this NASA news release that most stars in the Milky Way are part of a binary system, so we now see that in addition to planets orbiting around the individual stars in such a system, we also have an option for circumbinary orbits that may offer even more exotic venues for astrobiology. The discovery is also satisfying in a cultural context — I like what John Knoll of Industrial Light & Magic had to say about scientific discoveries and imaginative portrayals like Star Wars:

“Working in film, we often are tasked with creating something never before seen. However, more often than not, scientific discoveries prove to be more spectacular than anything we dare imagine. There is no doubt these discoveries influence and inspire storytellers. Their very existence serves as cause to dream bigger and open our minds to new possibilities beyond what we think we ‘know.'”

That’s certainly the case here, and the push and pull of imaginative depiction interfacing with science is woven through the history of the last hundred years. A science fiction tale may set a young student on a scientific career, which may in turn uncover something that trumps the original story, but in its own way provides fodder for the next generation of writers and filmmakers. The individual scientist may or may not care for science fiction, but from a cultural perspective, science and fiction weave a continuing, enthralling dance, one that can energize non-scientists and build the public case for keeping the discoveries coming.