The Snows of Enceladus

Once again it’s time to catch up with Enceladus, the little moon that has such a huge impact on the planetary system it moves through. We’re learning, for example, how much water vapor is erupting from the features in the moon’s south polar region known as the ‘tiger stripes.’ Cassini measurements (using the Ultraviolet Imaging Spectrograph aboard the spacecraft) had pegged the rate of discharge at 200 kilograms of water vapor every second. New measurements from ESA’s Herschel space observatory match up closely to these findings. Saturn’s E-ring, formed from plume particles, would dissipate in a few hundred years without discharges like these.

You may recall that back in June, Herschel results were announced that showed a huge torus of water vapor circling Saturn itself, one that appeared to be the source of water found in Saturn’s upper atmosphere. More than 600,000 kilometers across and 60,000 kilometers thick, the enormous cloud was produced by Enceladus and picked up by Herschel’s infrared detectors. Water had previously been detected by both Voyager and Hubble in Saturn’s upper clouds, and also spotted by ESA’s Infrared Space Observatory in 1997. These earlier detections had raised the question of how water molecules were entering Saturn’s atmosphere from space.

Studying Herschel’s cloud of water vapor and running computer models that incorporated what we know of Enceladus’ plumes helped researchers put the pieces of the puzzle together. It turns out that most of the water in the torus is lost to space, but enough falls through the rings to enter the planet’s atmosphere to account for the amount of water observed there. Tim Cassidy (University of Colorado, Boulder) is one of those who worked on the data:

“What’s amazing is that the model, which is one iteration in a long line of cloud models, was built without knowledge of the observation. Those of us in this small modeling community were using data from Cassini, Voyager and the Hubble telescope, along with established physics. We weren’t expecting such detailed ‘images’ of the torus, and the match between model and data was a wonderful surprise.”

More in this NASA news release. Meanwhile, we have the announcement at the EPSC-DPS Joint Meeting 2011 in Nantes that ice particles from the plumes also fall back onto the surface of Enceladus, building up areas blanketed by super-fine snow whose present state tells us that the plumes have been active for tens of millions of years or more. We already knew that modeling particle trajectories from the plumes produced accumulation on Enceladus itself — this work was done by Sasha Kempf (Max Planck Institute) and Juergen Schmidt (University of Potsdam) in 2010. The new work, by Paul Schenk (Lunar and Planetary Institute, Houston) relies on a painstaking examination of high resolution images in areas of suspected accumulation.

The result: Smooth terrain with topographic undulations suggestive of buried fractures and craters, and changes in slope along the rims of deeper fractures, all consistent with material coating the top of solid crustal ices. The researchers have been able to apply models of deposition showing that the rate of accumulation of these ice particles is less than a thousandth of a millimeter per year. Because the average layer is 100 meters deep in the area studied, the team calculates tens of millions of years would be needed to accumulate the entire amount. 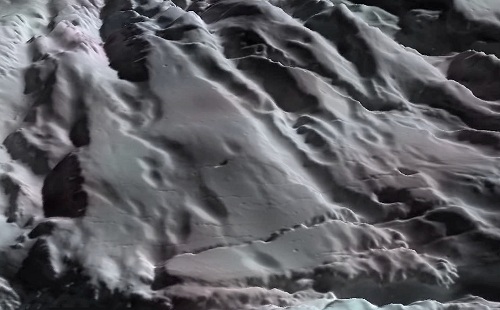 Image: Perspective view of “snow” covered slopes of Enceladus. This heavily fractured terrain lies north of the edge of the active south polar region. The largest of these fractures in the foreground is roughly 1 kilometre wide and 300 meters deep (0.6 miles wide and 1000 feet deep). The fainter dimples on the plateaus are actually older craters and fractures that appear to be covered by thick accumulations of fine particulates, sub-millimetre sized ice grains falling to the surface from the giant plumes to the south. At 12 meters per pixel (~40 feet) this view is one of the highest resolution images Cassini has obtained of Enceladus. Perspective rendering of the surface is derived from colour imaging a stereo topography of Cassini images, produced by D. Paul Schenk (Lunar and Planetary Institute, Houston). See also this ESA news release.

And so we can now talk about the ‘snows of Enceladus.’ They’re important, for their steady accumulation tells us that the heat source that drives the plumes and maintains any liquid water found under the ice crust must have been there for a long time. Schenk says the particles found here are roughly a micron or two across, making them finer than talcum powder that “would make for the finest powder a skier could hope for.” A pleasing thought, but Centauri Dreams assumes the scientist is even happier with the prospect that Enceladus’ snows will help us understand the internal heating mechanism that drives the plumes. What we need now is more high resolution imagery of a world few would have suspected would turn out to be so compelling.