Thoughts on a Different Apollo 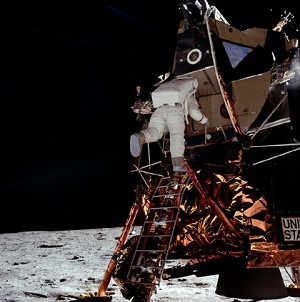 Did the Apollo missions produce enough good science to justify their cost? It’s a question Freeman Dyson has speculated on in the past, calling the missions a success because they were “conceived and honestly presented to the public as an international sporting event and not as a contribution to science.” Symbolic of this is the fact that the first item to be unpacked after each landing was the television camera that relayed mission imagery back to Earth. Apollo inevitably labored under the camera’s gaze, but no great scientific discoveries came from it, and the entertainment emphasis inevitably detracted from the missions’ scientific objectives.

What might Apollo have been if it had been conceived from the start to produce good science? Imagine this: Our six Apollo landings put two astronauts each on the surface for a period of several days. At their disposal were two tons of supplies and equipment. For the entire project, Apollo gave us a total of about 50 man-days on the Moon using an aggregate 12 tons of equipment. What if Apollo had produced 40 man-days per ton of equipment instead of the 4 it actually delivered? This could have been achieved by unmanned freight carriers conducting half the landings, providing six astronauts with 60 tons of supplies and equipment, sufficient for 400 days on the Moon.

You wind up with 2400 man-days of exploration instead of the 50 we achieved with Apollo. Let me quote John Cramer on this, because I’m drawing these thoughts from a column he wrote for Analog all the way back in 1988. Dyson had been visiting the University of Washington, where Cramer was then on the physics faculty, and his last lecture there contained these thoughts. Cramer took note of the advantages a much longer stay on the Moon could have brought:

With this much time, Dyson suggested, the Apollo project might have achieved some significant science. There would have been time to explore the lunar poles , to circumnavigate the body, to set up radio-astronomy dishes on the Moon’s radio-quiet back side, to take the time to investigate and theorize and observe and test and probe. There would have been the time and opportunity to bring into play those intrinsically human skills which have lead in previous years-long voyages of discovery to new insights and understanding.

The real Apollo, of course, was carried out in a few days by test pilots operating at a dead run, with one eye on the clock and the other on the prime-time news schedule. There was simply no time for science. Dyson’s revisionist version of Apollo is another road not taken.

The Problem of Premature Choice

Apollo was a success, but on the terms the mission was built around, and it could have been done much better. The Space Shuttle, however, was something much different, an example of what Dyson refers to as the ‘Problem of Premature Choice,’ which he defines as ‘betting all your money on one horse before you have found whether she is lame.’ Translated into bureaucratic terms, this means that a project can become large enough that exploring alternative engineering methods is seen as a waste that could become embarrassing to the public officials who have supported the project all along. Thus one of several alternatives is hastily selected, the rest eliminated, and the premature selection prevents the accurate analysis of the other methods.

Dyson himself has always been an example of independent thinking, but one whose priorities in space exploration favor science, which he thinks should command center stage. As he told his University of Washington audience, the contrast between the Space Shuttle and the International Ultraviolet Explorer (IUE) is instructive. The IUE came with mirror and optics from NASA, a solar power system from ESA, and communications gear from the UK. Countless astronomers and astrophysicists have used it to study tens of thousands of stellar objects in ultraviolet and visible wavelengths, and the IUE was available when supernova SN1987A occurred, providing exceptionally useful light curves that are suddenly back in the news as we try to figure out why neutrinos observed at CERN behaved differently from those from this event.

The IUE, which had been expected to last for three years, ended up serving us for eighteen, being finally shut down in 1996, some eight years after Dyson gave his talk at the University of Washington. The IUE provided a great scientific return in a mission that remains to this day little known. Learning where the payoff is — and deciding what kind of payoff you want to achieve — is key to the process. Looking at NASA’s future as of 1988, John Cramer asked this question:

Will there be further plodding along the dismal path that has lead from the triumph of Apollo to the Challenger Disaster? Will the agency continue to place science far down in the priority queue, going always for the Premature Choice and the job security of mammoth engineering projects? Will NASA continue to withhold any investments in the future, in advanced propulsion technologies, and in new ideas? I hope not.

The questions don’t seem to have changed much over the course of the last 23 years, although the scope of our ambitions has been downsized since that even earlier time (1952) when Wernher von Braun proposed a manned expedition to Mars that would have required moving 70 men and 4200 tons of equipment into orbit around the Red Planet, debarking 50 men and 150 tons of equipment to the surface in three ships, using what was essentially World War II technology.

Image: A Chesley Bonestell illustration from a 1952 issue of Collier’s showing his take on the von Braun Mars expedition.

A premature choice would have been dangerous here as well. Among the things Apollo did right was to work with adequate communications channels. Where von Braun chose a 1 kHz bandwidth for the link between the Mars expedition and Earth (essentially allowing the two to communicate via Morse code), Apollo was designed for spectacle and television, and used a communications bandwidth thousands of times broader. Dyson is all about getting the mix right, the right technology (competitively chosen) coupled to serious scientific purpose to achieve a lasting result.

John Cramer’s long-running Alternate View column in Analog can be accessed online. Talking to Cramer at the 100 Year Starship Symposium, I mentioned how useful I had found it over the years, and he told me that the site housing his column had been one of the first to appear on the Internet in Washington, preceding even the Microsoft website. Talk about getting ahead of the curve! Readers will enjoy Dr. Cramer’s take on everything from quantum mechanics to virtual reality over decades of speculation and analysis, a true resource for the interstellar minded. It’s also a source, as this 1988 column showed, of insightful commentary on getting our priorities right.