So much has been happening in recent weeks that I haven’t had the chance to keep up with all the stories in the queue, and that’s not a bad thing considering that a high level of activity usually means we’re learning new and interesting things. Consider the Dawn mission, which has been orbiting the asteroid Vesta since the middle of July. The Dawn team has been sharing results about Vesta in multiple locations, including the European Planetary Science Congress and the Division of Planetary Sciences Joint Meeting 2011 in Nantes and the annual meeting of the Geological Society of America in Minneapolis. As expected, Vesta turns out to be an intriguing place.

The image below is a look at Vesta’s topography in the southern polar region, with the overall curvature of the tiny world removed, so you’re seeing what it would look like on a flat surface. You wouldn’t have this view on Vesta because many of the features would wrap around below the horizon, but the image gets across the scale of the asteroid’s south polar mountain, which rises a good 22 kilometers above the average height of the terrain around it. And note the large cliff on the right side of the image, which bounds part of Vesta’s south polar depression. 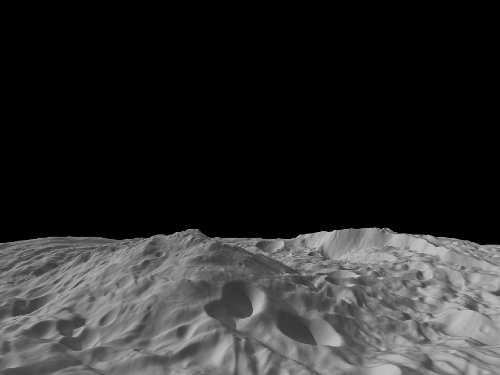 Image: This image of the asteroid Vesta, calculated from a shape model, shows a tilted view of the topography of the south polar region. The image has a resolution of about 1,000 feet (300 meters) per pixel, and the vertical scale is 1.5 times that of the horizontal scale. Credit: NASA/JPL-Caltech/UCLA/MPS/DLR/IDA/PSI.

Everything we see here is consistent with a giant impact in Vesta’s past. The surface is rougher than most asteroids we’ve observed in the main belt, and dating methods based on the crater count imply that some areas in the southern hemisphere are 1 to 2 billion years old, quite a bit younger than areas to their north. Dawn has continued in its closing, spiraling orbit around Vesta since July, reaching an orbital altitude of 2700 kilometers in August for mapping with its framing camera and infrared mapping spectrometer. In late August, the spacecraft began to move into its High Altitude Mapping Orbit, reaching 680 kilometers above the surface on September 29.

Carol Raymond (JPL), deputy principal investigator for Dawn, told an October 12 press conference that the fundamental dichotomy between northern and southern hemispheres was striking. She also pointed to the diversity in color on Vesta’s surface:

“We expected to see some variation in reflected light from Vesta, because that has been seen before with telescopes, and we also knew something about the composition of the asteroid from meteorites. But the diversity we saw with Dawn exceeds what we would have expected. The dichotomy in the morphology of the surface is also apparent in the color of the surface. In the southern hemisphere we see colors that are consistent with the basaltic morphology you would expect from meteorite studies, and in the northern hemisphere we see a more spectrally neutral surface punctuated by very distinct color variations that appear to be associated with impacts.”

A long process of analysis lies ahead as the Dawn team works to integrate these findings with the higher resolution observations it is now collecting. When operations in the High Altitude Mapping Orbit have been completed, the spacecraft will spiral into its Low Altitude Mapping Orbit in early December, with results from that regime reported in March of 2012. Dawn will spend a year orbiting the asteroid before departing in July of 2012 for Ceres. 2015 should be a lively year, for not only will Dawn reach Ceres but New Horizons will encounter Pluto/Charon. More on Dawn’s mission in this JPL news release.