Remembering Collier’s and Looking Ahead

We’ve been talking lately about space missions designed to maximize science vs. those that are at least partly geared toward public relations. But most missions will have both components, the need for public support being woven into the fabric of our ambitions. As we try, then, to ramp up the scientific return, what can we also do to keep the public engaged and instill interest in space exploration? One answer came from Wernher von Braun’s massive project for space exploration, described in a series of articles on space presented by Collier’s magazine from March of 1952 to April, 1954. 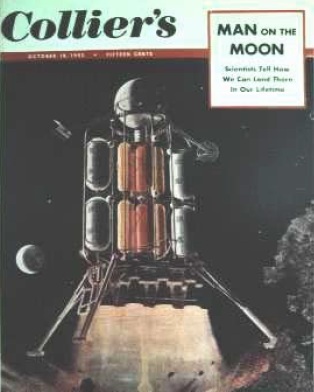 Let’s put aside all the technical problems of the von Braun concept and concentrate on it as an incentive for space missions. Al Jackson, with whom I enjoyed dinner and several good conversations in Orlando at the 100 Year Starship Symposium, recently sent me The Ugly Spaceship and the Astounding Dream, an article he wrote for the AIAA’s Horizons magazine. Al is completely upfront about the fact that it was the Collier’s series that brought him into space research in the first place. Now a visiting scientist at the Lunar and Planetary Institute, Al has seen aerospace from the government side (as astronaut trainer on the Lunar Module Simulator) to industry, knew Robert Bussard as well as Robert Forward, and wrote a number of papers on interstellar matters for JBIS, including work in the late 1970s on a laser-powered interstellar ramjet that I want to discuss soon in these pages.

Image: Chesley Bonestell’s take on the von Braun lunar lander, an ugly spaceship with a mind-blowing cargo of ideas.

The Collier’s series, tapping the artistic genius of Chesley Bonestell, produced what Al calls ‘the most influential feat of popular science writing ever,’ with its depiction of a complete manned space program ranging from Earth-circling space stations to lunar landings and that massive expedition to Mars. And ‘massive’ is the right word, for von Braun imagined a flotilla of ten spaceships with a crew of 70 making the Mars journey, fifty of them landing on the surface. 950 ferry flights were needed to assemble the spaceships, but von Braun’s vision included the space infrastructure to make that happen, all based on ideas he had been working on in 1947 and 1948, published first in a German journal and then brought out in a hardcover edition: Marsprojekt; Studie einer interplanetrischen Expedition. Sonderheft der Zeitschrift Weltraumfahrt (1952).

But it was the October 18, 1952 issue of Collier’s that Al, then almost twelve years old, found the most fascinating, the one with the ugliest, most un-aerodynamic spaceship he had ever seen shown on final descent to the Moon. It was in the pages of this issue that he learned that aerodynamic shapes count for little in space, and as he tells us in his article, the entire series would wind up changing his life:

I came to love that ugly space ship! It cemented itself to my soul. It led me to a life in science, a B.A. degree in Mathematics, an M.A. degree in Physics and a Ph.D. in physics. Most startling, to me, that series led me to 35 years of work in spaceflight, first Apollo, the Shuttle program, and now the ISS. All due to the romance of space expressed by Chesley Bonestell, Wernher von Braun and Willy Ley.

Collier’s produced spectacle and soaring ideas, doubtless contributing to the careers of numerous scientists and engineers, even if we now find the technical specifications of the von Braun program daunting. But I sometimes wonder what we might do today to recapture some of the spectacle produced by the Apollo landings, which similarly energized broad portions of the population. Space-minded people like myself are fascinated with the Dawn mission to Vesta and Ceres, and equally drawn to the allure of the Pluto/Charon encounter coming up in 2015. But what would have the most impact on those less obsessed with deep space?

I think I may have found the right concept. It’s the notion of exploring another planet by balloon, exemplified by MGA, the Mars Geoscience Aerobot, studied by a JPL team in the 1990s under the acronym MABVAP – Mars Aerobot Validation Program. It’s an idea with an international pedigree: A balloon system for Mars designed for a Soviet space probe was also under development through the work of Jacques Blamont (CNES), although the project was eventually dropped for financial reasons.

In essence, though, the ideas are similar. The idea is to deliver a superpressure balloon system to Mars, an aerobot that would remain aloft for as much as three months, circumnavigating Mars more than 25 times. Along with an infrared spectroscopy system, a magnetometer, instruments for studying Martian weather and a radar sounder, the balloon would be equipped with an ultrahigh resolution stereo imager. Robert Zubrin and a team at Martin Marietta have more recently been working on the Mars Aerial Platform (MAP), a plan to use eight balloons to map the global circulation of Mars’ atmosphere, examine its surface and subsurface with remote sensing techniques, and return thousands of high resolution images of the Martian surface.

The views returned by an aerial circumnavigation of Mars would be little short of spectacular, as Zubrin notes in the new edition of his The Case for Mars (2011):

Today, nearly five hundred years since Copernicus and Kepler, Brahe and Galileo, most people still think of Earth as the only world in the universe. The other planets remain mere points of light, their wanderings through the night sky of interest to a select few. They are abstractions, notions taught in schools. The MAP cameras offer the possibility of taking humanity’s eyes to another planet in a way that has never been done before. Through the gondola’s cameras we will see Mars in its spectacular vastness: its enormous canyons, its towering mountains, its dry lake and river beds, its rocky plains and frozen fields. We will see that Mars is truly another world, no longer a notion but a possible destination. And, just as the New World entranced and enticed mariners here on Earth, so can Mars entice a new generation of voyagers, a generation ready to fashion the ships and sails proper for heavenly air.

Remember, I’m thinking in terms of how to kindle public interest in space and keep those fires burning, and to me the ability to see the topography of Mars through close-up imaging of its entire surface could create an experience as breathtaking for some budding scientists as the Collier’s series was for Al Jackson. We go from looking at rover tracks and landscapes limited by a rover’s range to the ability to move freely over Mars, from Olympus Mons to the Valles Marineris.

Similar missions have been proposed for Titan, with a certain scientific return as well as the potential for serious public engagement as the aerobot probes the surface of the mysterious moon. An autonomous flying robot was actually delivered to Venus on each of the two Soviet Vega probes, entering the atmosphere in June of 1985. Both balloons operated for almost two Earth days until their batteries batteries failed [see comments below]. Deployed onto the darkside of the planet at an altitude of about 50 kilometers, the balloons operated for their brief lives in an altitude where pressure and temperature were not dissimilar to those of Earth.

While the scientific return from the Vega balloons was minimal, the concept was validated. Using aerostats equipped with high-definition imaging capabilities on Mars, we may be able to re-create some of the sizzle of exploration that the Voyagers had, giving a boost to science-minded young people and providing vistas for public viewing through remote sensing that could one day be looked back on as the key players in creating new careers in science. We may or may not one day get to the stars, but if we do, it will be because the right people came across the right incentives, leading them into careers that could change the way we do space exploration.