Kelvin Long is well known to Centauri Dreams readers. The physicist and aerospace engineer is, in addition to being one of the most energetic voices in the service of interstellar propulsion studies, the co-founder of Project Icarus, the successor to the 1970s-era Project Daedalus starship design study. Here Kelvin looks at where the ongoing Icarus effort stands in terms of fusion, placing that propulsion option in the context of the broader questions raised by pushing a payload to the stars.

Back in December 2009 I wrote an article titled Project Icarus and the Motivation Behind Fusion Propulsion. This was an attempt to justify the initial design choice of the team as part of the engineering requirements for the study that is Project Icarus.

Despite this article and other discussions we have had, we have recently learned something from our experience at the 100 Year Starship Study Symposium: People still don’t understand the Daedalus connection and fusion choice behind Project Icarus. I shall attempt to explain it in order that the Centauri Dreams readers can follow the process that led to this apparently controversial decision.

Firstly, let us address what makes Project Icarus so unique – its Daedalus heritage. Why was the project chosen to be this particular way? There are four reasons for having made this decision:

On the evidence for how the team has grown to date and the opportunities that have come our way, it is the view of this author that these decisions have been validated. We started from a very strong foundation, initially supported by the British Interplanetary Society and the Tau Zero Foundation. We made all of the right connections and gradually embedded ourselves within the interstellar community. In particular, we have gone out of our way to meet many of the giants of the field such as Geoffrey Landis, George Miley, Marc Millis, Terry Kammash, Eric Davis to name a few, and convince them that what we were doing had intellectual value. From discussions it appears they are largely in agreement. 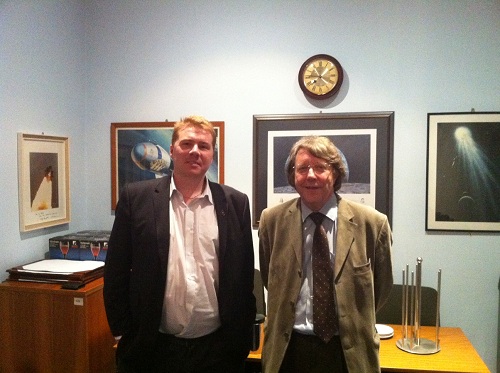 Image: Kelvin Long (left) and Alan Bond, one of the original Daedalus designers, at the headquarters of the British Interplanetary Society. Credit: K. Long.

Now let’s look at another bit of thinking behind the project, the interstellar community itself. I have already mentioned some names above. Some of the other greats in the subject have sadly left this world having made an astonishing contribution to the literature of interstellar flight. This includes inspiring people like Carl Sagan, Robert Forward and Robert Bussard, to name just a few. There are many other greats still working away. Greg Matloff is one of them, working as a consultant to Project Icarus by mentoring the design team and passing on his wisdom and experience. He still publishes papers and lectures at the same pace as the rest of us. Similarly, many of the original Project Daedalus team are still around, including Alan Bond, Anthony Martin and Bob Parkinson. But they are either in retirement or busy with other projects. Alan Bond of course is the Managing Director of Reaction Engines Ltd and this keeps him busy enough. Despite this, he still manages to find time to keep an eye on developments in the field, even attending the BIS World Ship symposium back in September this year.

Project Icarus is at heart a training exercise. It is an exercise in designer capability at the extreme end of aerospace engineering. The choice of fusion propulsion is not relevant to this ‘educational program’. All of the people involved in Project Icarus are essentially in interstellar school and hope sometime, perhaps around the year 2014 – 2015, to graduate first in their class.

We all have our pet favourites for how to get to the stars. My personal favourite happens to be internal and external nuclear pulse propulsion although I am also very interested in antimatter concepts. Additionally, other than Project Icarus, I am also involved with two solar sail projects. Others within the Icarus team also have their favoured methods for reaching the stars, including microwave beaming concepts to faster-than-light drives. One of these methods or a combination of these methods, a propulsion hybrid, may someday be the actual method by which we attain the journey and reach those far off destinations. But guess what, it doesn’t matter what the option is if there isn’t anyone around capable of doing the work and advancing that option technically. So Project Icarus aims to train the design team so that when they complete the project they are ‘capable’ of doing the necessary calculations to assess all of these options and thereby advance them all incrementally.

The Project Terms of Reference (ToR) document stipulate that the propulsion system must be mainly fusion based propulsion, to maintain continuity with Project Daedalus and allow a claimed ‘redesign’, which would otherwise be difficult to justify. From internal discussions within the team, we have interpreted this to mean that energy generation through fusion reactions should be responsible for around ~80-90% of the thrust generation during the boost phase. This work is defined under the Primary Propulsion module, led by Richard Obousy, the former Project Leader. This leaves around ~10-20% of the thrust generation during the boost phase to be augmented with alternative propulsion technologies. This work is defined under the Secondary Propulsion module, led by Andreas Tziolas, the current Project Leader. Project Icarus officially started in September 2009. Since that time members of the team have done various calculations and trade studies pertaining to nuclear fusion, antimatter, nuclear thermal propulsion, plasma drives, solar sails, magSails, Medusa sails, microwave beams, Orion-type drives and even Vacuum Energy concepts. A ToR needed to be defined at the beginning to constrain the design problem, otherwise a five year study would turn into a ten year study.

When Project Icarus is finally over, it is my personal aspiration that members of the design team will go off and seed other design projects across the propulsion spectrum, because they will have the knowledge and the skills to do so. Essentially, Project Icarus is injecting energy into the subject of interstellar studies. It is hoped that this energy will act as a catalyst and spread across the entire subject, through inspiration, hard work, enthusiasm and compelling reasons for trying. 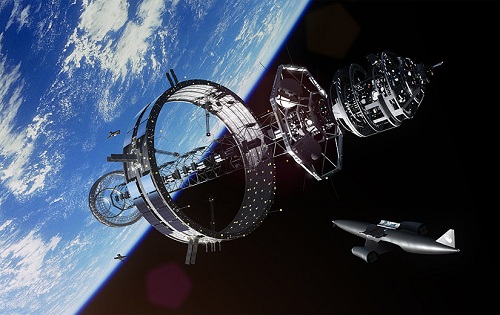 What you are witnessing in Project Icarus ladies and gentlemen is a classroom in action, played out on the World Wide Web. It is a pilot program for a Starflight Academy. If you want to train a bunch of people up quickly, the best way to do that is to throw them in the deep end with an engineering problem and say “go solve that”. This is precisely what the Project Icarus Study Group is attempting to do, where the specific exam problem is defined by our ToR, merely a mechanism for facilitating this goal. Perhaps someday a real Starflight Academy will exist, and teams will similarly be solving problems relating to many interstellar propulsion concepts. And it’s not just all about propulsion of course. A spacecraft design needs structure, materials, communications, reliability and a variety of other assessments to prove that it is a credible concept. We’re working on all those issues too and in the future will be taking more active steps to communicate some of that research to you the readers – something else we realized from the Orlando 100 Year Starship Study Symposium. People want to know some of our research findings and we need to start talking.

On a final note, I ask the readers not to see Project Icarus as an initiative that necessarily advocates fusion propulsion as the best way forward in reaching the stars. It happens to be the view of some members of the team, but others take a different view. Fusion propulsion and the Daedalus design, as studied within Project Icarus, is merely a vehicle upon which to train the eager young space cadets for the future. So that when we really do need that starship in a hurry, whatever the propulsion option of choice, we have a team ready and waiting to go and design it. Meanwhile, we will continue to wave our fists at the Sun and dare to “fly closer to another Star”, building on our forefathers who did that seminal Project Daedalus study in the 1970s. Like a son to a father, we hope to make them proud of our efforts and along the way find a way to build a better machine.