An orange dwarf star a bit smaller than our Sun is giving us valuable clues about how water-covered planets like Earth may evolve. TW Hydrae is 176 light years away, so young (5 to 10 million years) that it is still in the early stages of forming a planetary system. Working with data from ESA’s Herschel space observatory, astronomers have found cold water vapor in the disc of dust and gas that surrounds the star. It’s a significant find, because while we’ve found warmer water vapor in proto-planetary discs closer to their star, we now see evidence for much larger amounts of water in the outer disc, where the material for icy comets is found. Current theory holds that water will be far scarcer in the inner solar nebula around a coalescing system, meaning extensive oceans would have to be delivered by impacting objects from the outer regions.

The Herschel data show the distinct signature of water vapor, probably produced when ultraviolet radiation from the central star warms ice-coated dust grains, causing some water molecules to break free of the ice to create the thin layer of gas found by Herschel’s Heterodyne Instrument for the Far-Infrared (HIFI). TW Hydrae’s disc extends to 196 AU, and the assumption is that as matter within the disc grows into planets, much of the outer dust and ice will coalesce to become comets. Cometary bombardment in the emerging solar system could then produce oceans on the inner worlds there, a process that this work indicates may be common. Says Caltech’s Geoff Blake, one of the team of researchers investigating TW Hydrae: “These results beautifully confirm the notion that the critical reservoir of ice in forming planetary systems lies well outside the formation zone of Earthlike planets.” 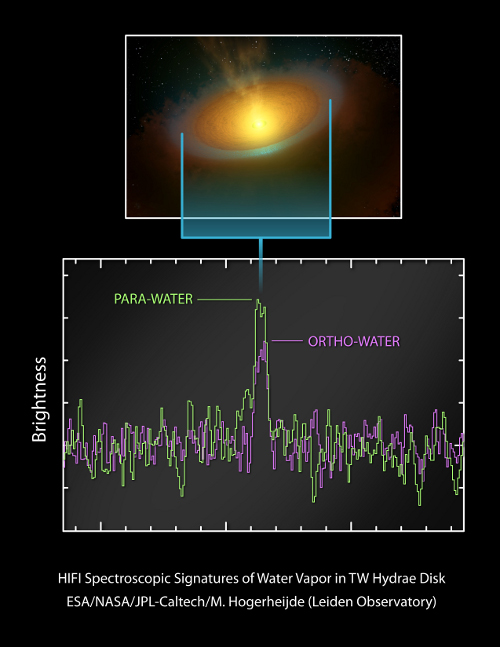 Image: This image shows an artist’s impression of the icy protoplanetary disc around the young star TW Hydrae (upper panel) and the spectrum of the disc as obtained using the HIFI spectrometer on ESA’s Herschel Space Observatory (lower panel). The graph in the lower panel shows the spectral signature of water vapour in the disc. Water molecules come in two “spin” forms, called ortho and para, in which the two spins of the hydrogen nuclei have different orientations. By comparing the relative amounts of ortho and para water, astronomers can determine the temperatures under which the water formed. Lower ratios indicate cooler temperatures, though in practice the analysis is much more complicated. The ratio of ortho to para water observed in TW Hydrae’s protoplanetary disc is low enough to point to the presence of cold water vapour. Credit: ESA/NASA/JPL-Caltech/M. Hogerheijde (Leiden Observatory).

Michiel Hogerheijde ( Leiden University) relates the process to our own Solar System:

“The detection of water sticking to dust grains throughout the disc would be similar to events in our own Solar System’s evolution, where over millions of years, similar dust grains then coalesced to form comets. These comets we believe became a contributing source of water for the planets.”

Simulations that folded the new Herschel data in with Spitzer observations as well as ground-based studies allowed the team to calculate the total amount of water in the TW Hydrae disc, an amount equal to several thousand Earth oceans. Studying such raw materials of planetary formation should help us understand how systems evolve, which is why upcoming Herschel studies of three more young stars with similar discs should be so interesting. The expectation is that more water vapor should turn up, supplying additional evidence for the kind of icy reservoir from which water-covered worlds can draw as infant solar systems emerge.

Related: Earth’s Oceans: A Cometary Source After All?