Imaging an Earth-like planet in the habitable zone may happen some time in the next decade if the James Webb Space Telescope can make its way through its budgetary hurdles and achieve a 2018 liftoff. But the word ‘imaging’ is a bit deceptive when you consider that we won’t be getting anything remotely like the view of a planet in our own Solar System through Webb’s instruments. No small disc with discernible features, in other words, but a single dot useful not because of what we can pick out visually, but because we can use its light to take a spectrum. And if we’re really lucky, we’ll find a dot that’s blue and a spectrum that shows the signature of a living world. 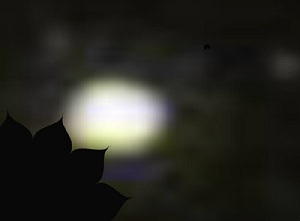 The JWST works at infrared wavelengths (covering a range from 0.6 to 28 micrometers), which is why shielding it from heat is so important, and why the design is marked by a large sunshield. These wavelengths should allow the instrument to study stars and galaxies from the early universe, but the addition of a starshade to the mission concept would enhance the exoplanet part of the conversation. In a recent Astrobiology Magazine article, Leslie Mullen talked to Matt Mountain and John Grunsfeld (Space Telescope Science Institute) about what a starshade might do (thanks to Erik Anderson for the tip). Think of a disc tens of meters wide with petal-like extensions placed between telescope and star. Mountain likened the starshade to putting your thumb in front of the Sun to create shadow:

[The starshade is] very carefully shaped, so you don’t get the sort of flaring that you normally get when you use a perfect sphere, where you get all these rings and refractions. These petals are designed to create a very smooth, very deep shadow. You basically slide in and out of the shadow, and then you can actually see the planet next to the star. The star is in the shadow, and the planet peeks around the shadow.

Image: A starshade would obscure the light of a star to allow its planets to become visible. Credit: Webster Cash/University of Colorado, Boulder.

The starshade would be placed 160,000 kilometers away from the JWST, which will orbit at the L2 Lagrangian point. And as Grunsfeld points out, that single dot yields other information:

…if you had enough time, and there were seasons, with ice covering and then going away, you could study it and be able to tell the difference between winter and summer on the planet, or vegetation, in principle. Just from unresolved single pixels, because of the color changes.

Given our inability to get a finalized Terrestrial Planet Finder design into the mix, the JWST thus becomes a major exoplanet asset, though a mission of daunting complexity, and one whose orbit would make any necessary on-site repair problematic, to say the least. Unlike Kepler, this is an instrument that can sample stars that are relatively near to the Earth. Most of the 150,000 stars in the Kepler field are further away, chosen because the goal of Kepler is to study a large number so as to achieve a statistical analysis of the incidence of the various kinds of planets around them. 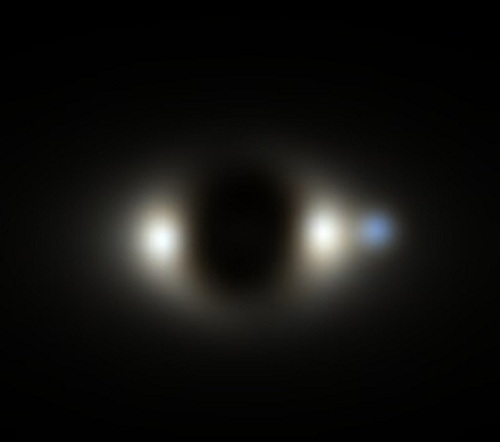 Image: What a starshade might see, based on studies for a starshade concept called New Worlds Observer, one we’ve discussed many times on Centauri Dreams. The image shows an Earth-like planet at a distance of 30 light years. The white ring is dust in the stellar system, reflecting starlight under an angle of 30°. The central black disk is the shadow cast by the starshade. The Earth-like planet is the object with the familiar blue hue. Credit: Phil Oakley, Webster Cash (University of Colorado, Boulder).

Adding a starshade to the JWST mission profile adds to both cost and complexity, but the starshade would extend the telescope’s ability to see exoplanets. On its own, JWST can study a transiting world, but Mountain figures such transits might show up in no more than 5 to 7 percent of stars. The ability to take a planetary spectrum independent of the planet’s orientation around the star is what the starshade offers. We now wait to see whether JWST itself has a future. Its ballooning costs have threatened the project in Congress, but NASA administrator Charlie Bolden sees the telescope as one of the agency’s top priorities. With $3.5 billion already spent and ¾ of the construction and testing complete, Centauri Dreams thinks this mission will fly, but not without the kind of budgetary near-miss that is the nemesis of complex science everywhere. The loss of the Space Interferometry Mission will always be a reminder of what can still happen.