Back when I was writing my Centauri Dreams book in 2004, I remember talking to JPL’s James Lesh about various aspects of communicating with distant spacecraft. Lesh had written an interesting paper on how we might communicate with an Alpha Centauri probe, and we went on to discuss laser communications in the context of today’s Deep Space Network. What stuck in my mind about that conversation was how much we can learn when one thing moves in front of another. Lesh pointed out how useful it is to examine a radio signal when a spacecraft moves behind a planet, studying the attenuation of the signal and learning more about the planet itself.

When a celestial object moves in front of a distant star, we also get useful results, as has recently happened in our studies of the dwarf planet Eris. You’ll recall that it was Eris that kicked off a new round of controversy about Pluto, for the early estimates were that the diameter of Eris (then thought to be 3000 kilometers) was actually 25 percent larger than Pluto’s. The possibility of numerous such objects in the Kuiper Belt caused us to reassess the definition of the word ‘planet,’ leading to the creation of ‘dwarf planet’ as the operative term for both Eris and Pluto.

But in November of last year, Eris occulted a distant star, an event monitored at two sites in Chile, including the TRAPPIST (TRAnsiting Planets and PlanetesImals Small Telescope) at La Silla. We learn from this that Eris is close to spherical, assuming there are no large mountains on the object, and that Pluto and Eris are more or less the same size, with the new diameter calculated for Eris coming in at 2326 kilometers (Pluto’s is between 2300 and 2400 kilometers). It’s interesting that Pluto’s diameter is actually harder to measure because even with the help of past occultations, the presence of an atmosphere makes the measurement less precise. 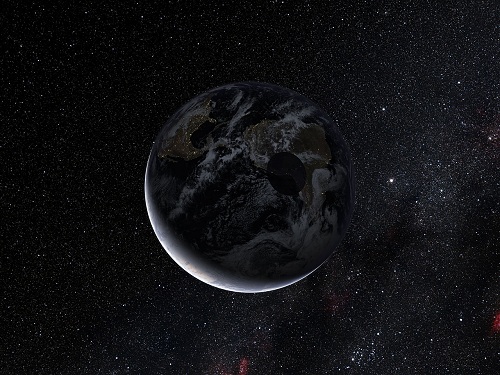 Image: This artist’s impression shows the shadow of the dwarf planet Eris as it was crossing the Earth during the occultation in November of 2010. The regions along the path saw a faint star briefly disappear as its light was blocked by Eris. Studies of where the event was seen, and for how long, have allowed astronomers to measure the size of Eris accurately for the first time. Surprisingly, they find it to be almost exactly the same size as Pluto and learn that it has a very reflective surface. Credit: ESO/L. Calçada.

Eris turns out to be reflective indeed, with an albedo of 0.96 (reflecting some 96 percent of the light that falls on it). This ESO news release notes that this albedo makes the dwarf planet brighter than fresh snow on Earth, flagging it as one of the most reflective objects in the Solar System, in company with Saturn’s moon Enceladus. Moreover, studies of Eris’ moon Dysnomia help us arrive at a mass estimate for Eris, which turns out to be 27 percent heavier than Pluto, with a density estimated at 2.52 grams per cubic centimeter. Emmanuel Jehin, one of the researchers involved in the occultation study, says this about the finding:

“This density means that Eris is probably a large rocky body covered in a relatively thin mantle of ice. This layer of ice could result from the dwarf planet’s nitrogen or methane atmosphere condensing as frost onto its surface as it moves away from the Sun in its elongated orbit and into an increasingly cold environment.”

Estimates suggest a surface temperature of -238 Celsius on the day side of Eris, but when the object moves back toward perihelion in its orbit (37.8 AU), the ice Jehin is talking about may well turn back into gas. Eris is currently at 96.6 AU, near aphelion. Telescopes at 26 different locations around the globe were used to observe the occultation, but the dwarf planet’s shadow was only detected at the two sites in Chile, where a sudden drop in brightness was apparent. But even with small telescopes, the value of one celestial object moving in front of another is again demonstrated, helping us learn more about a dwarf planet on the edge of the Solar System.