A Surprise at Lutetia

﻿Sometimes our spacecraft take us past an asteroid, and other times the asteroid comes to us. Asteroid 2005 YU55 pays Earth a visit soon, closing to a bit less than the distance of the Moon on November 8. The Deep Space Network dish at Goldstone (CA) and the Arecibo facility in Puerto Rico will track the object, with images from Goldstone expected to achieve resolutions as fine as 2 meters per pixel, which should give us a wealth of information about the asteroid’s surface features. About the size of an aircraft carrier, 2005 YU55 was also observed by Arecibo in 2010, when it was found to be roughly spherical in shape with a rotation period of 18 hours.

You’ll also recall asteroid 21 Lutetia, which we covered here when the European Space Agency’s Rosetta probe flew past it in July of 2010. The imagery from that encounter showed a cracked and battered surface, but new analysis now indicates that the asteroid may once have had a hot metallic core. Lutetia may, in other words, be a remnant of an ancient period of planetary formation. 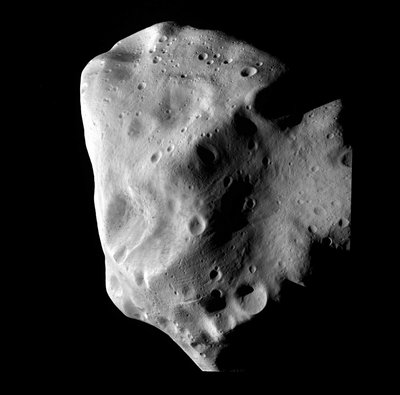 This is interesting stuff because most objects in the main belt between Mars and Jupiter are thought to be relatively light masses of rock and metal that have battered each other for billions of years. Few would have melted to form metallic cores, so the thinking goes, and most would be little more than loosely bound piles of debris. But Holger Sierks (Max-Planck Institute for Solar System Research) and the Rosetta team find that Lutetia is actually quite dense. They based their work on calculations of the asteroid’s volume and mass, drawing on models derived from the Rosetta images and the effect of Lutetia’s gravity on the spacecraft.

Image: A year after the flyby, the analysis shows that Lutetia is a primordial asteroid, with a surface covered in craters, pulverised rocks and landslides. It may also have tried to form an iron core billions of years ago. Credit: ESA 2010 MPS for OSIRIS Team MPS/UPD/LAM/IAA/RSSD/INTA/UPM/DASP/IDA.

The Sierks paper on this work puts the matter succinctly:

Look at the surface of Lutetia and you see huge fractures that suggest a porous object that does not square with the density calculations. But Benjamin Weiss (MIT) suggests that melted material beneath the fractured crust — a dense metallic core — would account for the discrepancy. And instead of the idea of asteroids as primordial unmelted objects, we begin to see a boundary line, with the possibility of larger asteroids being partially differentiated, possessing a melted interior overlain by outer layers. Here’s Weiss on the subject:

“The planets don’t retain a record of these early differentiation processes. So this asteroid may be a relic of the first events of melting in a body.”

That would make asteroids like Lutetia unusual but not unique — there may be many objects with unmmelted surfaces but differentiated interiors. The challenge will be to get to an asteroid to return samples that could provide more evidence for this explanation. The smallest asteroids are unlikely to retain a molten interior, but larger bodies in the asteroid belt may prove more interesting than we had realized.

At the time of the 2010 encounter, Lutetia was the largest asteroid ever to have been visited by a spacecraft. Vesta has now eclipsed that record, and the recent findings will make Dawn’s missions at Vesta and Ceres all the more interesting. An asteroid sample return mission — Weiss is part of the NASA team — is slated for a 2016 launch, though not to Lutetia. It’s interesting to note here that earlier work by Weiss on the Allende meteorite showed that samples were strongly magnetized, leading to the theory that the meteorite came from an asteroid with a melted metallic core. All of this may be showing us planetary development in its earliest stages.