Les Johnson (MSFC) always says that the coolest job title he ever had in his long career at NASA was Manager of Interstellar Propulsion Research. Think about it — if going to the stars is your passion and you have a title like that, you must feel that you have really arrived. These days he goes by the more prosaic title of Deputy Manager for the Advanced Concepts Office at Marshall Space Flight Center in Huntsville, but as the recent interstellar workshop in Oak Ridge demonstrated, he’s also ranging widely on his own as conference organizer, author and science fiction aficionado. His presentation in Oak Ridge was designed to jump start the conference with a survey of the problems of interstellar flight and the long list of possible propulsion solutions.

The problems are clear enough. Think of the distance between the Earth and the Sun (about 150 million kilometers). That’s 1 astronomical unit (AU). Shrink that distance to one foot and imagine the Solar System, with Neptune 30 feet out and so on. On that scale, the distance to the Alpha Centauri system is 47 miles. Moving at 17 km/sec, Voyager 1 would take 74,000 years to make the Centauri journey (if it were pointed in that direction in the first place, which it is not). Les was part of the Interstellar Probe Science and Technology Definition Team that aimed at designing a spacecraft that could reach the heliopause, and at this point in our technological evolution (this was back in the 1990s), it was clear that three propulsion options were possible: A chemical rocket with gravitational slingshots at both the Sun and Jupiter, solar sails, or nuclear electric.

Let’s pause on the latter. Electric propulsion, which uses electrical energy to heat and eject the propellant, offers much lower thrust levels than chemical propulsion, but it is ten times more efficient per pound of fuel. A mission to the outer system would require a nuclear power source operating at high power, but the technology is workable and in Les’ opinion could deliver a mission to 200 AU within 20 years of launch. Solar sail options are likewise no longer theoretical, and Les pointed out that NASA has selected L’Garde to work on a sail a bit less than 80 meters to the side that is to become the agency’s first deep space sail experiment in about three years.

From nuclear pulse propulsion (Project Orion, the size of an aircraft carrier, would present serious problems in terms of in-space assembly) to nuclear fusion and antimatter-catalyzed fusion, a variety of nuclear concepts have been considered, including the British Interplanetary Society’s Project Daedalus and the ongoing Project Icarus studies. Antimatter remains an elusive goal. We would need antimatter production of just kilograms per year to drive a true interstellar mission (compare this to tens of thousands of tons of helium-3 and other fuels needed for a Daedalus), but our current antimatter production is mere nanograms per year.

The Q&A session that followed Les’ talk brought a response to his contention that fission was not practicable for interstellar travel, noting that staged fission rockets might be able to reach 2 percent of lightspeed. If so, that does change the picture somewhat, and if anyone has a reference to a paper on staged fission concepts, I’d like to read more about this. Another interesting note: Les’ book Going Interstellar, edited with science fiction writer Jack McDevitt, is coming out from Baen some time in 2012. This is a collection of essays and fiction, and it was great to hear that the publisher intends to bring out a teacher’s guide to get these ideas to high school students. We need to energize that next generation.

Pushing into the Artistic Frontier 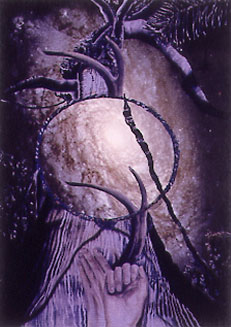 C Bangs is a Brooklyn-based artist whose work draws on a vision of man’s future in space. I use the term ‘vision’ with care, because I find her work laden with mythic echoes of our species’ past even as it points to a cosmic destiny that we seem impelled by our nature to strive for. I’ll add this: My own background as a medievalist left me with a fascination for illuminated manuscripts like the Lindisfarne Gospels and the Icelandic Flateyjarbók. Some of C’s work reminds me of ancient manuscript designs even as it draws on cutting-edge physics and astronomy, subjects she has illustrated so well in her collaboration with her husband Greg Matloff. If you page through a book like Solar Sails or Paradise Regained, you’ll see how her work re-states the scientific themes with archetypal resonances that take the reader into the realm of the transcendent.

The Paradise Regained book is particularly to the point here, because as C told the audience in Oak Ridge, she has long been fascinated with the Gaia Hypothesis, the concept that the Earth as a whole is a cooperative system that maintains conditions for its own survival. You can wed this deep interest in interlocking systems with a love of landscape that was surely nurtured by trips to Puerto Rico, where her father was teaching. One of these trips led to a tour of the great Arecibo dish, an experience that was both majestic and transformative. From then on, cosmology would weave into mythology as the basis for her vision. Her work for NASA includes a holographic coating technology that could enable 3-D images to accompany deep space missions (a set of her holographic work is housed at Marshall Space Flight Center). 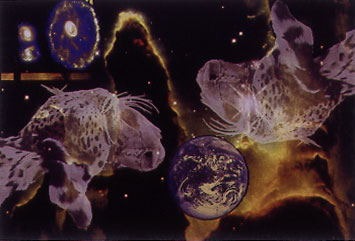 What struck me as C showed images of her work in Oak Ridge was the sense of optimism they contained. If she explores human consciousness through archetypes, she also insists on a positive response to the cosmos and an engagement with cutting-edge ideas. It’s no surprise that interstellar studies champion Robert Forward was a key figure in securing her early funding from NASA, and her continuing work with Greg has ensured that she keeps current with the interstellar community. Optimism may grow naturally out of that engagement, the idea being that without a frontier to explore, the problems of this planet can seem overwhelming, leading to a cynical, defeatist kind of art that is worlds away from what C expresses. Our problems are indeed huge, but space offers solutions to our resource crisis and feeds our need for exploration, the latter a deep-seated drive so well captured in C’s eloquent imaginings.

People sometimes say that Project Icarus has a strange name, given that Icarus was a mythological figure who flew too close to the Sun and thus met his doom. But Icarus is also a logical name for the project that would follow up the 1970s-era Project Daedalus, which had been the first detailed design study of a starship ever made. After all, Icarus was the son of Daedalus, and as Richard Obousy pointed out in his presentation in Oak Ridge, the idea is that Icarus was a pioneer who pushed his technology to its limits to reveal its hidden flaws. Project Icarus aspires to do the same, to push a fusion design hard to uncover hidden problems, and determine just how much we have advanced since the heady days of Project Daedalus. 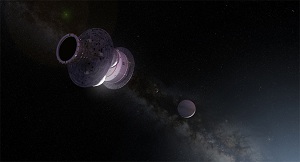 Now Richard Obousy is as engaging a proponent of interstellar flight as one could meet, and we enjoyed a lengthy dinner conversation after the day’s sessions were over. Every now and then I talk in these pages about teaching tools, the kind of comparisons that help us understand things like interstellar distances. Rich had one for me — Look at a map of the United States and imagine that the Earth is in New York City, while the Alpha Centauri stars are in Los Angeles. With that scale in mind, realize that our Voyagers, now entering the heliopause, would be roughly 1 mile along the route to LA. What we need to do, as Rich told the audience during his talk, is to increase velocity by a factor of about a thousand, to make missions consistent with human lifespans. Icarus chooses fusion as the best way to liberate the energies needed for that.

The Project Icarus playbook is a thing to behold, with twenty different research areas under active investigation, everything from primary propulsion and fuel to power systems, communications, computing, vehicle assembly, risk and repair. Each of these modules has a lead and each lead has a team dedicated to solving the challenges of his or her subject. The purpose is not to build a starship — we’re a bit ahead of the curve for that — but to motivate a new generation of scientists to become involved in interstellar studies, to generate interest in precursor missions, to explore credible design concepts and assess the maturity of fusion.

The 100 Year Starship Study DARPA has funded will be making an award of $500,000 to the team it chooses to advance interstellar ideas in coming years — both the Icarus team (operating as Icarus Interstellar) and the Tau Zero Foundation have submitted proposals, along with a number of other organizations. We won’t know who wins the grant for a few months yet, but ponder the overall ideas. As Obousy told the audience in Oak Ridge, the average lifespan of a company in the United States is 13 years. What DARPA wants to do is provide seed money for an organization that will last for centuries. That in itself is perhaps a bigger challenge than building a starship. It involves an attempt to find the next Google, the next Apple, and to so craft the organization that it can survive economic ups and downs and changes in intellectual fashion.

Can it be done? The DARPA award-winner will make the effort, one that Centauri Dreams heartily applauds because it requires long-term thinking pushed to its limits, and shrewd marshaling of existing resources. Interstellar studies is an exciting place to be. We’ll talk on Monday about another exciting concept called ‘shell worlds’ that I learned about in Oak Ridge, and discover why little Ceres may one day be the richest world in the Solar System.