Kepler-22b: A ‘Super-Earth’ in the Habitable Zone

It’s fun to see Kepler-22b — an intriguing new world that lies 600 light years from us toward Lyra and Cygnus — being referred to as the ‘Christmas planet’ in the newspapers this morning, the latter a nod to Kepler chief scientist William Borucki, who said he thought of the planet that way, as a seasonal gift to the team. Borucki’s enthusiasm is understandable, and it’s echoed by Geoff Marcy (UC-Berkeley), who called the Kepler-22b work a ‘phenomenal discovery in the course of human history.’ I can’t argue with scientists of this calibre — with a surface temperature not so different from an April afternoon where I live, Kepler-22b can lay claim to being the smallest planet we’ve found orbiting in the habitable zone of a star like our Sun.

The host star is, in fact, a G5-class object with mass and radius only slightly less than that of our Sun, which is a G2, and the planet in question orbits it with a period of 289 days, some 15 percent closer to its star than we are to ours. Liquid water could surely exist on this object, and the excitement grows from that fact as well as the fact that this is the smallest-radius planet discovered in any habitable zone thus far. At 2.4 times the size of the Earth, it falls into the ‘super-Earth’ category about which we need so much more information. So far, we can say about its mass only that it is less than 36 times that of Earth (this is based on the absence of a measurable radial velocity wobble in the host star in follow-up observations). The mass of other ‘super-Earths’ has been measured at five to ten times that of Earth. 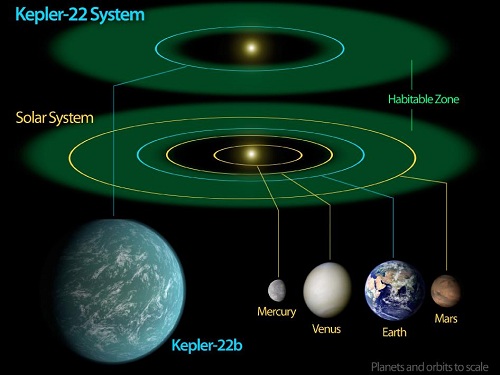 Image: This diagram compares our own solar system to Kepler-22, a star system containing the first “habitable zone” planet discovered by NASA’s Kepler mission. The habitable zone is the sweet spot around a star where temperatures are right for water to exist in its liquid form. Liquid water is essential for life on Earth. Credit: NASA/Ames/JPL-Caltech.

A second Earth? Hardly, but habitable conditions could exist here even if, as seems likely, Kepler-22b is more of a Neptune than an Earth, perhaps one with a planet-encircling ocean. But we have so much to learn — is this actually a rocky world, or an ocean planet or a kind of cross between Neptune and the Earth, with gas, liquid and plenty of rock? Whatever the case, Kepler-22 has been a long time coming, with the first transit captured just three days after Kepler became operationally ready. The all important third transit was acquired just about a year ago.

The Kepler science conference at NASA Ames is ongoing (it runs from the 5th to the 9th), and we now have an 89 percent increase in the number of planet candidates identified by the hard-working instrument, the total reaching 2,326. A NASA news release on the latest findings says that 207 of these candidates are approximately Earth-sized, while 680 fit the ‘super-Earth’ category, 1,181 are Neptune-size, 203 are similar to Jupiter in size and 55 are larger than Jupiter. The main trend here is a dramatic increase in the number of smaller planet candidates.

The new data show 48 planet candidates in their star’s habitable zone, a decrease from the 54 reported in February that is related to a slightly changing definition of ‘habitable zone’ in the new Kepler catalog. Natalie Batalha (San Jose State University) is Kepler deputy science team lead:

“The tremendous growth in the number of Earth-size candidates tells us that we’re honing in on the planets Kepler was designed to detect: those that are not only Earth-size, but also are potentially habitable. The more data we collect, the keener our eye for finding the smallest planets out at longer orbital periods.”

All true, and exciting in every respect. Still, I can’t help thinking how we keep finding new causes for celebration, each one with a slightly smaller world, or one just a bit more in the habitable zone than the previous. In my household we have a birthday tradition that stretches what would be a one-day event into a week-long affair. On my actual birthday, I’ll get presents from the kids. But maybe one of them couldn’t be there, so that sets up a second ‘birthday’ the next day. And then a day or two later we’ll go have a birthday dinner out. You get the point: It’s fun to drag out festivities, and we can expect more of this phenomenon as Kepler continues its work. Because one of these days it’s going to tag a planet of definitely Earth-mass in the habitable zone of a G-class star, and that’s going to be the true ‘second Earth’ we’ve all been hoping to find.