I normally scan through various news items for the Notes & Queries posts, but in this case I’ve been trying to catch up on my reading. In particular, I’ve been looking at books that could be useful in inspiring young people to get interested in astronomy and engineering. Here’s a look at three titles that more or less fit that bill. The budding rocket scientist will love the revised Zubrin, particularly with its infectious and expansive sense of what’s possible, but younger students may find their minds tweaked by the two other selections, both of which I’d recommend for a high-school audience. We never know what can launch a career, but scientists are always reminding me of particular books they read when they were kids that made all the difference.

Back to the Red Planet

Toward the end of Robert Zubrin’s The Case for Mars (revised edition, 2011), the author looks at three possible models for getting humans to the Red Planet. It’s a significant section because Zubrin recognizes the political and economic realities of our time, and knows that to make something audacious happen in space will require either a commitment from government of the kind we haven’t seen in decades or a substantial infusion of interest from the commercial sector. 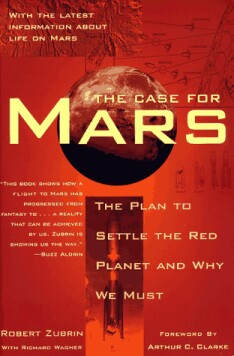 Zubrin’s ‘JFK Model’ is what you would expect, a call upon America to rise to the challenge of interplanetary flight. It would involve the nation embarking on what he thinks would be a $30 billion program that would create jobs and spin off technologies while reinvigorating the exploratory spirit. The rival ‘Sagan Model’ would be an explicitly international effort drawing upon collaboration from all space-faring nations, with the potential benefit of easing global tensions in pursuit of a common goal. Finally, the ‘Gingrich Model’ draws on Zubrin’s conversations with the former Speaker of the House, which resulted in Zubrin’s working out a Mars prize that would be funded by government but would result in intense commercial competition for a privately-built mission. All three are out of vogue given the economic realities, but the case for each is interesting, and the right approach could wind up saving quite a bit of money.

For Zubrin is able to get the numbers down even lower than the surprising $30 billion he discusses for the JFK model by using the private sector’s various economies. He’s a persistent critic of government waste with a career in aerospace that has taught him how it happens:

…the major aerospace companies contract with the government to do a job on a ‘cost plus’ basis, which means that whatever it costs them to do the job, they charge the government a certain percentage more, usually 8 to 12 percent. Therefore, the more it costs the major aerospace companies to do a job for the government, the more money they make. For this reason their staffs are top heavy with layer after layer of useless, high-priced ‘matrix managers’ (who manage nothing), ‘marketeers’ (who do no marketing), and ‘planners’ (whose plans are never used) and whose sole apparent function is to add to company overhead. Of course, since the government needs proof that the expenses claimed by the aerospace companies are actually being incurred, vast numbers of accounting personnel are also employed, to keep track of how many labor hours are spent on each and every separate contract. To give you an idea of how bad it is, at Lockheed Martin’s main plant in Denver, where I used to work, and where the Titan and Atlas launch vehicles are produced, only a small minority of all personnel actually work in the factory. The fact that Lockheed Martin is cost competitive with the other large aerospace companies indicates that the rest of them are operating with similar overhead burdens as well.

A new kind of aerospace industry based on minimum-cost production methods — this is what you get by posting multi-billion dollar prizes of fixed amount for breakthrough space accomplishments — is one way to make a Mars mission more tenable than the $450 billion colossus once estimated to pay for President Bush’s 1989 Mars initiative. The logistical nightmare created by multiple launches, on-orbit assembly and propellant-hauling to the Red Planet seemed to define our prospects until Zubrin started attacking those numbers with refreshing new concepts. He also supplies a philosophical case for making them happen.

The Case for Mars was a bracing read when it appeared and its revised version has the same combination of exuberance and inventive zeal that resulted in Mars Direct, a plan that uses technology we have today to land fuel factories on Mars that would supply later manned missions with what they need to get back to Earth. Those of us with an interstellar bent will appreciate Zubrin’s tireless work in favor of a human future off-planet. Whether you’re coming to The Case for Mars for the first time or read it when it first appeared, the new version is worth your time. Travel light, live off the land, make it happen now — that’s the spirit invoked here, which is why Sagan once wrote “Bob Zubrin really, nearly alone, changed our thinking on this issue.”

The Japanese form of comic art known as manga seems a surprising way to teach tough concepts, and I was more than skeptical when I first took a look at The Manga Guide to Relativity and The Manga Guide to the Universe (No Starch Press, 2011). But these are cleverly designed books, co-published with the technical publishing house Ohmsha in Tokyo and part of a Manga Guide series devoted to technical and scientific subjects. Each guide is written by a specialist in its field and illustrated by a professional manga artist. I started thumbing through the Manga Guide to Relativity and found myself drawn into a storyline that fed into the deeper content. 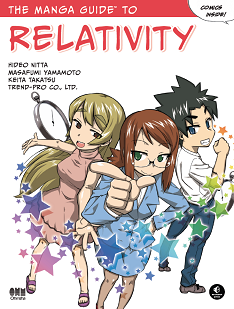 I’m thinking these guides would be a good way to reach young people with an approachable story that leads to some meaty physics. In the relativity book, a student is challenged to pick up the basics of special and general relativity over the course of a summer and works his way through these with an attractive young teacher who teases and prods him into understanding. The book alternates between manga and written text and manages to work through everything from time dilation to the twin paradox, examining why length contracts and mass increases at relativistic speeds and how mass affects spacetime, with results we can measure. I won’t say that the concepts here are taught painlessly — Einstein puts plenty of demands upon anyone’s imagination — but they’re creatively presented and made exciting.

The Manga Guide to the Universe is a thicker volume that takes three high school girls through a course in basic astronomy and astrophysics, with the aid of a kindly professor and the context of a play they are trying to present. The alternating manga and text cover theories of the universe’s origin and the discoveries that helped us understand its scale, working up to the cosmological microwave background and the mysteries of dark matter and dark energy. There’s enough meaty concepts here to challenge a young student and perhaps fill his or her head with ideas that might lead to a career. The Manga Guides aren’t textbooks in the classic sense, but you could consider them enticements, keys that might unlock much tougher texts down the road.

A TV Universe Now in Print

If I were trying to inspire young people with the beauties of astrophysics, I’d also make sure to show them Brian Cox’s Wonders of the Universe (HarperDesign, 2011). This is a superb coffee-table book with the kind of gorgeous photography I associate with large, glossy science books, but it’s also a well-written and thoughtful presentation of current thinking on the cosmos. Cox (University of Manchester) is a particle physicist who has brought his teaching skills to the fore in a television show of the same name. A keyboardist in the UK pop band D:Ream in the 1990s, he brings a certain brio to the task that never undercuts the clarity of his exposition. 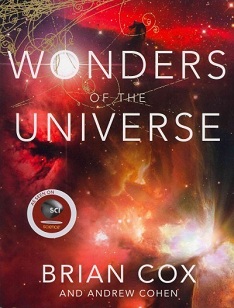 I also see him compared to Carl Sagan, which seems relatively apt given that both were gifted popularizers who could make difficult concepts accessible. For the book and TV series, Cox was able to travel to exotic locations around the globe to make his points, going to the Valley of the Kings, for example, to talk about celestial alignments and ancient concepts of the heavens, or to the Bagmati River in Nepal, where he sees the funeral pyres that line its banks and discusses the Hindu beliefs about the recycling of the elements, a line of thought that will lead him on to examine the death of stars and the explosive birth of new elements.

The photographs and diagrams truly carry this book, but Cox gets across the wonder of what he does for a living, as he does here in a bit once again reminiscent of Sagan (in Pale Blue Dot):

All of this in large print on the side of a double-page spread showing an artist’s conception of a supernova that blazes out in fantastic wraiths of color. This kind of thing makes for good TV and it’s solidly expressed in the text, which offers a crash course on our latest discoveries in the cosmos even as it sketches in the historical contributions that have gotten us to our current understanding. I would aim this book at the student who has already decided he or she is interested in the heavens and wants to learn more. Reading through Cox’s description of entropy — as he walks the sands of the Namibian desert and uses the ruined structures of old settlements to explain it — connects theory with the palpable world in ways that can reach young minds.