Voyager in the Doldrums

One of the pleasures of writing Centauri Dreams is digging into a paper to look at it from various directions, as I did recently with Jim Benford’s work on cost-optimized beamed sails. Jim has been working on these concepts for a long time, and although I had originally intended to devote two days to his latest, the depth of his analysis led me to extend the discussion to a third day. That kind of focus invariably means I get behind in other stories, though, so I want to be sure to catch up with matters like the recent news about the Voyagers as they continue to exit our system.

I always point to the still functioning instruments of the Voyagers as an outstanding example of how we can build spacecraft for the long haul — these tough platforms show what can be done with careful design, and future craft fully optimized for even longer flights certainly seem practical. In this case, three instrument packages — the Cosmic Ray Subsystem, the Magnetometer and the Low Energy Charged Particle instrument — have told us that Voyager 1 is now in the doldrums of the Solar System, a place at the outer edge of the heliosphere where the solar wind has dropped to zero and the magnetic field is being compacted and intensified. 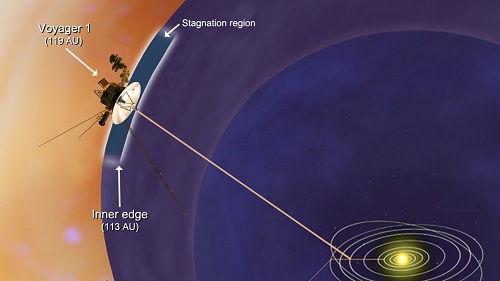 At the same time, Voyager has seen the energetic particles from within our system declining, now about half as abundant as they had been during the past five years, while the intensity of high-energy electrons from elsewhere in the galaxy is up 100-fold. All of this adds up to the approach of true interstellar space. Here’s Rob Decker, a Voyager Low-Energy Charged Particle Instrument co-investigator (JHU/APL):

“We’ve been using the flow of energetic charged particles at Voyager 1 as a kind of wind sock to estimate the solar wind velocity. We’ve found that the wind speeds are low in this region and gust erratically. For the first time, the wind even blows back at us. We are evidently traveling in completely new territory. Scientists had suggested previously that there might be a stagnation layer, but we weren’t sure it existed until now.”

Out of the doldrums and into interstellar space, where the winds are galactic — what an outcome for the twin craft launched in 1977. The new findings were announced at the at the American Geophysical Union’s fall meeting in San Francisco, and we can count on the Voyagers staying in the news for a while longer, as the boundary they’re crossing may take no more than a few months — or several years — to transit. Where next after Voyager? Ralph McNutt’s Innovative Interstellar Explorer is a robust take on an interstellar precursor mission that would be the logical follow-up, a mission study that could put instruments out to 200 AU and test numerous technologies. Let’s hope IIE finds the support it will need to turn it into actual hardware.

Next post: Spaceflight and Legends: A Dialogue with Michael Michaud