I’m delighted that we keep finding solar systems so different from our own. The discovery of two new planets that are roughly the size of the Earth just confirms the feeling — in a galaxy of dazzling fecundity, every system we look at has its own peculiarities to instruct and delight us. The system around the star called Kepler-20 (from its designation by the space observatory studying planetary transits) is a case in point. Yes, it has small, rocky worlds, but it also has three larger planets, and all five orbit closer than the orbit of Mercury in our own system. Kepler-20 is a G-class star somewhat cooler than the Sun located some 950 light years from Earth in the constellation Lyra.

Moreover, while we once assumed that smaller planets orbited close to stars while larger gas giants orbited further out in the system (again based on our own system and our assumptions about it), our new discoveries point to different scenarios. In Kepler-20 we have a system where the larger planets (all smaller than Neptune) orbit in alternating fashion with the rocky planets. We get a big planet and then a little one, then another large one, another rocky planet, followed by a third large world. Kepler 20-b, 20c and 20d are the large planets, with diameters of 24,100, 39,600, and 35,400 kilometers respectively, and orbital periods of 3.7, 10.9, and 77.6 days.

“The Kepler data are showing us some planetary systems have arrangements of planets very different from that seen in our solar system,” said Jack Lissauer, planetary scientist and Kepler science team member at NASA’s Ames Research Center in Moffett Field, Calif. “The analysis of Kepler data continues to reveal new insights about the diversity of planets and planetary systems within our galaxy.”

As you would expect, it’s the small planets that command the headlines this morning, their presence seen as another step in the goal of finding an Earth-sized planet in the habitable zone. These worlds at least fit the bill in terms of size, although water on the surface is out of the question, as temperatures are thought to reach 760 degrees Celsius on the inner world and 426 degrees Celsius on the outer. With an orbit of 6.1 days, Kepler 20e is equivalent to 0.87 times the size of Earth, with a diameter of 11,100 kilometers. Kepler-20f, orbiting the host star every 19.6 days, has a diameter of 13,200 kilometers, quite close to the size of the Earth. Both planets are expected to be rocky, with masses less than 1.7 and 3 times that of Earth. 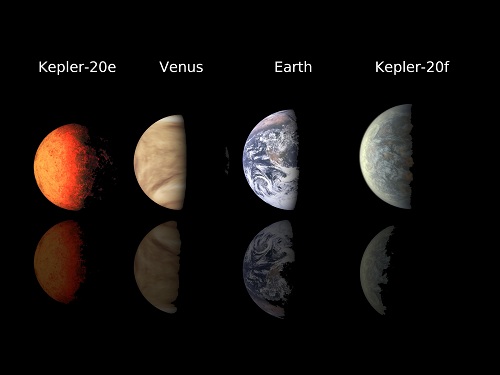 Image: This chart compares the first Earth-size planets found around a sun-like star to planets in our own solar system, Earth and Venus. NASA’s Kepler mission discovered the new found planets, called Kepler-20e and Kepler-20f. Kepler-20e is slightly smaller than Venus with a radius .87 times that of Earth. Kepler-20f is a bit larger than Earth at 1.03 times the radius of Earth. Venus is very similar in size to Earth, with a radius of .95 times that our planet. Prior to this discovery, the smallest known planet orbiting a sun-like star was Kepler-10b with a radius of 1.42 that of Earth, which translates to 2.9 times the volume. Credit: NASA/Ames/JPL-Caltech.

So there we are, the smallest planets yet confirmed around a Sun-like star, a likely case of planetary migration in which planets form much farther from the host star and migrate inward because of interactions with the protoplanetary disk. Although Kepler’s transit methodology is finely tuned, the radial velocity signature of planets like the smaller two around Kepler-20 is out of the detection range of current technology. Kepler’s ‘long stare’ at the starry patch in Cygnus, Lyra and Draco was able to turn up the planetary candidates here, but intense computer simulations by way of follow-up were necessary to demonstrate the likelihood of the smaller detections being planets.