Prior Visions of Star Flight

Here is a holiday gift from Tau Zero as compiled by TZF’s founding architect Marc Millis. It’s part of Marc’s continuing effort to find earlier references to the interstellar concepts — many of them in fiction — that we routinely ponder today. Some of these go back to the early 20th Century and in some cases the 19th. Compilations like this are always works in progress, as we found when putting together a list of interstellar propulsion concepts for the first chapter of the book Marc and Eric Davis edited, Frontiers of Propulsion Science, where one memory triggered another and the list kept growing. Readers are encouraged, then, to add other references to older material, as those of us who delight in prowling through old science fiction magazines have access to a mother lode of fictional precedents. I’ll also mention that this post will be the last of 2011 — as I did last week, I’ll skip the Friday and Monday posts in honor of the holiday, with the next post appearing on Tuesday, January 3. 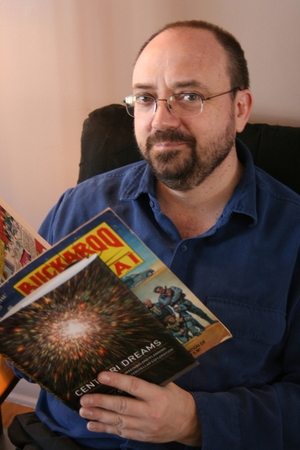 I am indebted to the following volunteers who helped me finish these lists of inspirational starflight visions, both fictional and engineered: Brandon Vernon, Curtis Wilbur, Tatiana Covington, Yusif Nurizade, and Geoff Landis.

These lists of noteworthy fiction and engineered interstellar ships are not complete lists, but rather those that had more influence than the rest. In some cases I’ve added my personal reactions. Enjoy!

Millis comment: I did not see this movie until long after Star Wars had been out (some time in the 1980s). When I did finally see it and knowing its creation date, I was seriously impressed. Even the opening narrative makes sense. The ship dealt with the differences in FTL and slower flight well, and I was delighted that it did NOT use rockets. Landing scene done well (image courtesy Metro-Goldwyn-Mayer).

Millis comment: To me, the most stimulating part of this vehicle is that it is larger on the inside than outside – good fodder for pondering. I did not discover Dr. Who until the late 1980’s.

Millis comment: I grew up watching Star Trek after the Apollo Moon landings when I was at that impressionable age. This was the fiction that provoked much of my early thinking about physics and star flight. The occasional logical inconsistencies (e.g “Wink of an Eye”) fueled as much thought as the unknowns that needed to be to solved. I remember being frustrated by not being able to find out which parts of the ship’s technology were just fiction and which were based on extensions of works in progress. That unfulfilled desire led me to some of the thoughts behind Tau Zero.

Millis comment: This specific vehicle has an even fonder place in my memory than the starship Enterprise, since this ship was on the scale I could imagine owning and operating myself. And even more than that, this ship was THE major icon for my childhood ponderings for how to make such a vehicle real. In my early teens I would imagine this ship hovering over my driveway, and then I would imagine throwing rocks at it and poking it with a stick to try and decipher how it might be hovering (typical boy way of analyzing things, eh?) The trajectory of the rocks would vary depending on the levitation method. These mental exercises led me to realize what I would have to study in school to figure these things out on my own. I have yet to write down and share such ponderings in open publications, but look forward to doing so some day. 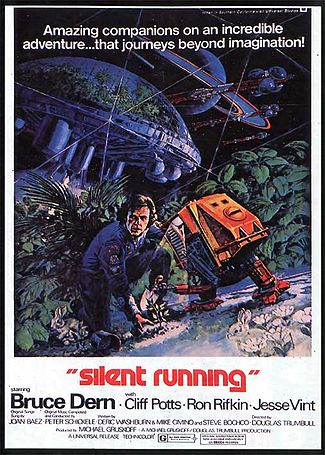 Millis comment: When this vehicle hit the screens it helped reenergize my enthusiasm, but I was not impressed by its operations. Unlike Star Trek, which hit me in my impressionable years, Star Wars emerged when I was already studying physics in college. It became clear after a few minutes of watching the movie that Star Wars was more about entertainment than speculation, and was absent the kind of provocations of Star Trek, the Outer Limits, and the Twilight Zone. As much as that Falcon looked cool, it was NOT thought-provoking. I was entertained and energized, but it did not stimulate my imagination.

Millis comment: Finally, a different space engine than the ubiquitous warp drives and hyperspace! In addition to the great humor of the Hitchhiker series, I really like this propulsion concept. It was fun, funny, and intellectually provocative.

Millis comment: I am one of the few people who love this movie because of its delightful, complex absurdity. Regarding inspirations, there is a moment near the end of the movie when our hero, Buckaroo Banzai, connects jumper cables to a car battery to get the “thermal pod,” in which he is plummeting to suddenly start levitating. That cause-effect moment hit me hard. The notion of a car battery powering the levitation propulsion on a little pod was heart warming, in a delightfully absurd way.

Millis comment: There was a scene where a pre-teen is riding inside a transparent-invisible sphere that flies around in all directions and goes right through objects (like the ground) while the pre-teen remains protected. Although not explained in the movie, the behavior of that device was as if the internal inertial and gravitational environment is disconnected from the external inertial and gravitational environment. It matched several of my prior imaginative sessions. 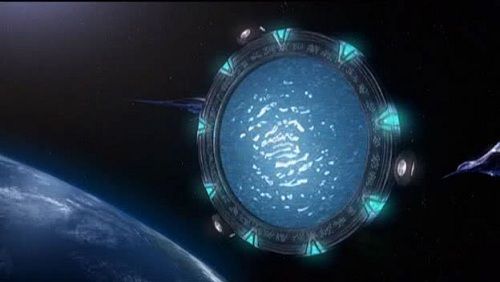 Image: A screenshot from the science fiction television series Stargate Atlantis, one of several TV spinoffs from the film.

Millis comment: I thoroughly enjoyed this parody, in particular the role of the enthusiastic, believing fan, and the contrast between fiction fandom and reality (albeit the movie’s ‘reality’ is fiction too).