Unseen Planets Around a Young Star?

If you want a glimpse of how remarkable technology continues to transform the exoplanet hunt, look no further than the Subaru telescope and its SEEDS project. SEEDS (Strategic Exploration of Exoplanets and Disks with Subaru Telescope/HiCIAO) works with data from the 8.2-meter telescope that the National Observatory of Japan runs on Mauna Kea (Hawaii). In its most recent finding, Subaru was used with the adaptive optics system HiCIAO (High Contrast Instrument for the Subaru Next Generation Adaptive Optics) to image the dust ring around HR 4796 A, a relatively young star (8-10 million years old) some 240 light years from Earth.

Working with evanescent clouds of dust and debris over these distances is no easy matter, but adaptive optics can correct for atmospheric blurring to produce images that rival the Hubble Space Telescope’s in terms of clarity. Add to that an advanced image processing technique called angular differential imaging, which suppresses the glare of the central star and enhances the light from the ring, and you wind up with images like the one below. What stands out is the offset between the center of the ring and the location of the star — probably induced by one or more massive planets — as well as the presence of finer dust that extends beyond the main body of the ring. 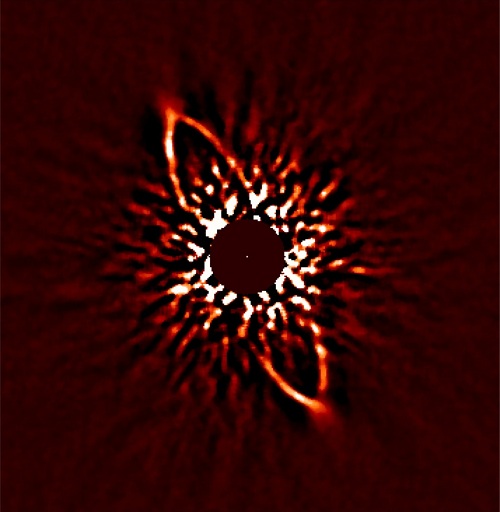 Image: Near-infrared (1.6 micron) image of the debris ring around the star HR 4796 A. The ring consists of dust grains in a wide orbit (roughly twice the size of Pluto’s orbit) around the central star. Its edge is so precisely revealed that the researchers could confirm a previously suspected offset between the ring’s center and the star’s location. Credit: SEEDS/NAOJ.

I use the word ‘probably’ above when referring to planets because there are other factors that could explain the offset. At this point we have been able to image almost two dozen nearby debris disks, and the paper on this work notes the factors that are conceivably involved (internal citations omitted for brevity):

The morphological appearance of resolved debris disks is predicted to be influenced by interactions between dust in the disk and nearby planets… the local interstellar medium…, recent stellar flybys and binary companions… mutual grain collisions… and interaction of dust with residual gas…. Many resolved systems exhibit all morphological structures predicted by these mechanisms… The observable morphology of resolved, optically thin debris disks is also wavelength dependent, as different bandpasses sample different grain size distributions.

It’s worth noting in this context that this is a binary system, with an M-class companion to consider. So what we have here are not confirmed planets but confirmation of earlier work that suggested an offset between the debris disk’s inner edge and the star. Christian Thalmann (University of Amsterdam) and co-authors suggest in the paper on this work that if planets do lurk in this system, next-generation high-contrast imaging facilities may well be able to detect them.

Understanding how planetary systems form from the disks that surround young stars helps us make sense of the abundant harvest we’re gathering from the exoplanet hunt. In this case, we’re seeing an effect — possible unseen planets affecting a circumstellar disk — that has shown up in computer simulations, and we can also point to the eccentric dust ring around Fomalhaut as observational evidence for the same process at work. The dust ring we do observe is most likely created by the collision of remnant planetesimals that continually replenish the disk.