Resolving the Mysteries of Titan’s Weather

A robust new computer model that couples the atmosphere of Titan to a methane reservoir on the surface goes a long way toward explaining not just how methane is transported on the distant moon, but also why the various anomalies of Titan’s weather operate the way they do. The model comes out of Caltech under the guidance of Tapio Schneider, working with, among others, outer system researcher extraordinaire Mike Brown. It gives us new insights into a place where the average surface temperature hovers around a chilly -185 degrees Celsius (-300 F). 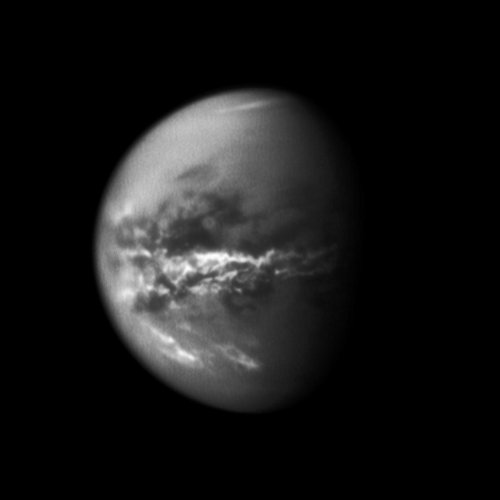 Titan can a frustrating place for meteorologists to understand because during the course of a year some things happen that, in the early days of research, didn’t make a lot of sense. The moon’s equator, for example, is an area where little rain is supposed to fall, but when the Huygens probe arrived, it saw evidence of rain runoff in the terrain. Later, storms were found occurring in the area that did not fit then current models of circulation. The new three-dimensional model simulates Titan’s atmosphere for 135 of its years, which converts to 3000 Earth years. And it produces intense equatorial rains during Titan’s vernal and autumnal equinoxes.

According to the researchers, rain is indeed rare at low latitudes, but as Schneider says, “When it rains, it pours.” And the equatorial regions aren’t the only venue on Titan that the new model addresses. Titan’s methane lakes cluster around the poles, and it has been established by Cassini’s unceasing labors that more lakes exist in the northern than the southern hemisphere. According to Schneider, methane collects in lakes near the poles because sunlight is weak enough in those regions that little methane evaporates.

As to why more lakes are found in the northern hemisphere, let me quote from the Caltech press release on this work:

Saturn’s slightly elongated orbit means that Titan is farther from the sun when it’s summer in the northern hemisphere. Kepler’s second law says that a planet orbits more slowly the farther it is from the sun, which means that Titan spends more time at the far end of its elliptical orbit, when it’s summer in the north. As a result, the northern summer is longer than the southern summer. And since summer is the rainy season in Titan’s polar regions, the rainy season is longer in the north.

And there you have it — the summer rains in the southern hemisphere may be more intense because of stronger sunlight to trigger storms, but over the course of a year, more rain falls in the north, filling the lakes and accounting for their distribution. Older explanations that relied on methane-producing cryogenic volcanoes look to be in danger of being supplanted by the new model of atmospheric circulation on Titan, an explanation that requires nothing esoteric. The beauty of the work is that the model predicts what we should see in the near future: Rising lake levels in the north over the next 15 years, and clouds forming over the north pole in the next two.

Thus a set of testable predictions by which to evaluate the model emerge, what Schneider calls “a rare and beautiful opportunity in the planetary sciences,” and one which should help us refine the model as events progress. “In a few years,” he adds, “we’ll know how right or wrong they are.” Adding to its weight is the fact that the model reproduces the observed distribution of clouds on Titan, which earlier atmospheric circulation models had failed to do. The paper is Schneider et al., “Polar methane accumulation and rainstorms on Titan from simulations of the methane cycle,” Nature 481 (5 January 2012), 58–61 (abstract).