It’s always gratifying to note the contributions of amateur astronomers to front-line science. In the case of three small planets discovered around the Kepler star KOI-961, the kudos go to Kevin Apps, now a co-author of a paper on the new work. It was Apps who put postdoc Philip Muirhead (Caltech) on to the idea that KOI-961, a red dwarf, was quite similar to another red dwarf, the well-characterized Barnard’s Star, some six light years away in the constellation Ophiuchus. It was a useful idea, because we do have accurate estimates of Barnard Star’s size, and the size of the star becomes a key factor in exoplanet detections.

For the depth of a light curve — the dimming of the star over time due to the passage of planets across its surface as seen from Kepler — reveals the size of the respective planets. Researchers from Vanderbilt University aided the Caltech team in determining KOI-961’s size, a difficult call because while Kepler offers data about a star’s diameter, that data is considered unreliable for red dwarfs. Detailed spectra from both Palomar and Keck showed that Kevin Apps was right. “When we compared its fingerprint with those of the best known M dwarfs we found that Barnard’s Star was the best match,” says Vanderbilt astronomer Keivan Stassun.

Having established the size, mass and luminosity of KOI-961, the team could calculate the size and characteristics of the planets around it. Confirming three planets that are actually smaller than Earth took intensive follow-up, using photographs taken with the Palomar Observatory’s Samuel Oschin Telescope in 1951. KOI-961 is in Cygnus about 130 light years away, close enough to show motion in the time period involved, and it was clear from studying the photographs that no background stars could have accounted for the light curves.

We wind up with three small exoplanets that range in size from 0.57 to 0.78 times the radius of Earth. The primary is only about 70 percent bigger than Jupiter, but all three of the planets are so close to it that their temperatures are expected to range from 200 degrees Celsius for the outermost planet up to 500 degrees Celsius for the innermost. The entire system is small enough that Caltech astronomer John Johnson compares it to Jupiter and its moons, adding “This is causing me to have to fully recalibrate my notion of planetary and stellar systems.” 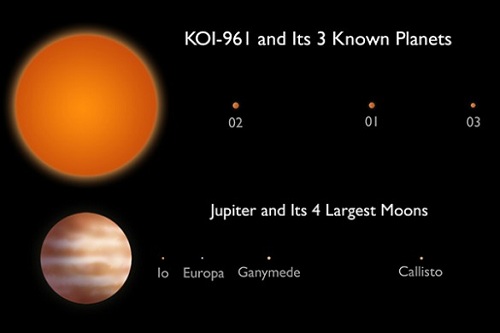 Image: This artist’s conception compares the KOI-961 planetary system to Jupiter and the largest four of its moons. The KOI-961 system hosts the three smallest planets known to orbit a star beyond our sun (called KOI-961.01, KOI-961.02 and KOI-961.03). The planet and moon orbits are drawn to the same scale. The sizes of the stars, planets and moons have been increased for visibility. Credit: Caltech.

All three planets are thought to be rocky, so small that only such a composition would allow them to hold together. And while the three are obviously not habitable, the fact that we’re now finding small worlds around red dwarfs has undeniable implications. Johnson again:

“Red dwarfs make up eight out of every ten stars in the galaxy. That boosts the chances of other life being in the universe—that’s the ultimate result here. If these planets are as common as they appear—and because red dwarfs themselves are so common—then the whole galaxy must be just swarming with little habitable planets around faint red dwarfs.”

After all, while Kepler reported 900 exoplanet candidates in February, only 85 or so were in red dwarf systems, a small sample but one that is already producing planets. The vast numbers of red dwarfs in the Milky Way thus gain further interest as possible sites for life, although as we’ve discussed many times in these pages, huge issues remain, such as tidal locking and the flare activity often found in younger red dwarfs. We can expect continuing study of the question of whether a rocky world in the habitable zone of such a star could offer life a viable foothold.

Ongoing red dwarf studies will add to our picture of the prevalence of such planets, as the paper on this work notes:

Combined with the low probability of a planetary system being geometrically aligned such that a transit is observed (only 13% in the case of KOI 961.01), Kepler’s discovery of planets around KOI 961 could be an indication that planets are common around mid-to-late M dwarfs, or at least not rare. This would be consistent with the results of Howard et al. (2011), who used the Kepler detections to show that the frequency of sub-Neptune-size planets (RP = 2-4 R⊕) increases with decreasing stellar eﬀective temperature for stars earlier than M0. Results from on-going exoplanet surveys of M dwarfs such as MEarth (e.g. Irwin et al. 2011b), and future programs such as the Habitable Zone Planet Finder (e.g. Mahadevan et al. 2010; Ramsey et al. 2008) and CARMENES (Quirrenbach et al. 2010), will shed light on the statistics of low-mass planets around mid and later M dwarfs.

And what of Barnard’s Star itself? This Vanderbilt news release discusses the star’s appearance in televised science fiction but misses the wonderful use Robert Forward made of it in Rocheworld, a novel he wrote to illustrate his concept of ‘staged’ laser sails carrying a manned mission to the stars. In any case, the idea of planets around Barnard’s Star is not new. It was in the late 1960s that Peter van de Kamp announced what he thought were two gas giants in orbit around the star, but neither planet could be confirmed and the detection is now thought to have been the result of a systematic error produced by van de Kamp’s equipment.

Nonetheless, while we’ve been able to exclude planets larger than about five Earth masses within 1.8 AU of the star, Barnard’s Star could still have smaller undetected planets. Doubtless the steadily growing interest in red dwarfs will result in further studies of this nearby target.

Next post: New Exomoon Project Will Use Kepler Data

Previous post: Planets by the Billions in Milky Way