Exoplanetary Ring Systems and Their Uses

What to say about an extrasolar ring system that has already had its four distinct rings named? Rochester, Sutherland, Campanas and Tololo are the Earth-bound sites where the unusual system was first detected and analyzed, and the international team of researchers involved thought them suitable monickers for the four rings thus far detected. The light curve of the young, Sun-like star they’ve been studying in the Scorpius-Centaurus association — a region of massive star formation — shows what appears to be a dust ring system orbiting a smaller companion occulting the star. 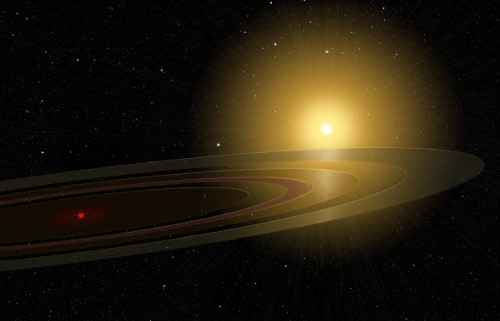 The data here come from SuperWASP (Wide Angle Search for Planets) and the All Sky Automated Survey (ASAS) project. The star in question is 1SWASP J140747.93-394542.6, which displays a complex eclipse event with, at some points, 95 percent of the light from the star being blocked by dust. Similar in mass to the Sun, the star is only about 16 million years old, and lies about 420 light years away from the Solar System. Eric Mamajek (University of Rochester) thinks the object at the center of the system is either a low-mass star, a brown dwarf, or a planet, but it will take follow-up studies to determine the answer. Says Mamajek:

“When I first saw the light curve, I knew we had found a very weird and unique object. After we ruled out the eclipse being due to a spherical star or a circumstellar disk passing in front of the star, I realized that the only plausible explanation was some sort of dust ring system orbiting a smaller companion—basically a ‘Saturn on steroids.’ This marks the first time astronomers have detected an extrasolar ring system transiting a Sun-like star, and the first system of discrete, thin, dust rings detected around a very low-mass object outside of our solar system.”

Image: Rings found in a young stellar system may offer clues to planet formation, including the moons around gas giants. Credit: Michael Osadciw/University of Rochester.

The discovery is unusual but it’s not likely to be our last look at such systems. A circumstellar disk can have a huge radius, and we can imagine seeing one star in a binary system with such a disk that would regularly eclipse the other star. The same is true of a giant planet in a young system that is building moons out of its own circumplanetary disk. Seeing such disks in eclipse could tell us much about the era of planet formation, and we already have long-period eclipsing systems like EE Cephei, Epsilon Aurigae and OGLE-LMC-ECL-17782 to build on. In fact, the eclipses associated with Epsilon Aurigae last almost 2 years, and we may be seeing “…rings and gaps in a forming planetary system around a lower mass secondary,” as the paper on this work notes.

But we could also be looking at moons in formation around a gas giant, a subject that calls up our recent discussion of the HEK (Hunt for Exomoons with Kepler) project and the detectability of these objects. The exomoon discussion in the paper is worthy of an extended quote:

A simple thought experiment illustrates the potential observability of moon-forming circumplanetary disks around young gas giants (and indeed this was the back of the envelope calculation that spawned our interest in the interpretation of the eclipsing star)… If one were [to] take the Galilean satellites of Jupiter and grind them up into dust grains, and spread the grains uniformly between Jupiter and Callisto’s orbit, one would have a dusty disk of optical depth O(105). The size of such a proto-moon disk in this case would be a few solar radii – i.e. large enough and optically thick enough to potentially eclipse a star’s light. Of course such a disk need not be face on – more likely the disk would have a nonzero inclination with respect to the planet-star orbital plane, so the star need not be completely geometrically eclipsed by such a circumplanetary disk.

Relating this to our own system, the paper goes on:

The rings of Saturn have optical depth near ∼1 even at a relatively old age (4.6 Gyr), however the vast majority of mass orbiting Saturn is locked up in satellites (Mrings ≃ 10−4 Msatellites). Presumably a disk of much higher optical depth and signiﬁcant radial substructure existed during the epoch of satellite formation. While there have been studies investigating the detectability of thin, discrete planetary rings similar to Saturn’s… there has been negligible investigation of the observability of the dense proto-satellite disks that likely existed during the ﬁrst ∼107 years. Relaxing the assumptions about the size, mass, composition and structure of the disk in our back-of-the-envelope calculation has little impact on the feasibility of the idea that dusty disks of high optical depth may be a common feature of young gas giant planets, and such objects may be observable via deep eclipses of young stars.

Putting all this together, our knowledge of the moons of gas giants in our own Solar System tells us that when they were in formation, circumplanetary disks would have produced equally complex eclipses if seen in transit by distant astronomers, showing dense areas alternating with gaps where the young moons were in the process of formation. Viewing such events around exoplanets, then, we may be seeing a testbed for moon and planet formation theories that will become increasingly more valuable as the number of such disk observations increases.

The paper is Mamajek et al., “Planetary Construction Zones in Occultation: Discovery of an Extrasolar Ring System Transiting a Young Sun-like Star and Future Prospects for Detecting Eclipses by Circumsecondary and Circumplanetary Disks,” in press at the Astronomical Journal (preprint).