The Dunes of Titan

The methane/ethane cycle we see on Titan is reminiscent of the water cycle on Earth, which is what people are really talking about when they refer to this frigid place as vaguely ‘Earth-like’ — this is not exactly a temperate climate! But we have a long way to go in understanding just how the cycle operates on the distant moon, which is why new work on Titan’s sand dunes is drawing interest. By studying the dune fields, we can learn about the climatic and geological history they depict and perhaps get clues about other issues, such as why Titan’s lakes of liquid ethane and methane are found mostly in the northern hemisphere.

What Cassini is showing us are regional variations among Titan’s dunes, a landscape feature that covers some 13 percent of the surface in an area roughly equivalent to that of Canada. But every time we run into an Earth analogue on Titan, we’re confronted with major differences. Titan’s dunes are made not of silicates but of solid hydrocarbons that wind up as tiny grains after precipitating out of the atmosphere. They’re also much larger than sand dunes on Earth, averaging 1-2 kilometers in width, hundreds of kilometers in length, and 100 meters in height.

Have a look at Cassini’s view of Titan’s dune fields as compared to what we see on Earth: 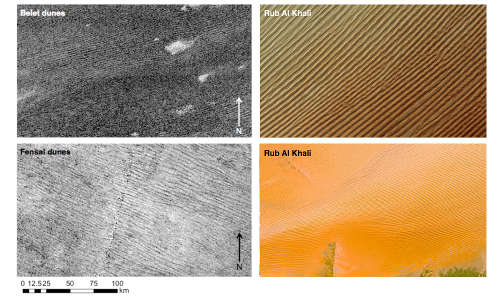 This ESA news release points out that radar data from Cassini have allowed researchers to see clear correlations between the size of Titan’s dunes and their altitude and latitude. The major dune fields are all found in lowland areas, with dunes at higher elevations much more widely separated and, judging from the bright radar echo Cassini detects from them, covered by thinner layers of sand. Titan’s dunes are also largely confined to its equatorial region, in a band between 30°S and 30°N. As we move north, the dunes become narrower and more widely spaced.

The key may be Titan’s weather. Seasons here are just over seven Earth years long, and the elliptical nature of Saturn’s orbit results in shorter, warmer summers for the southern hemisphere. The result: The wetness of the surface in the southern areas from ethane and methane vapor in the soil is reduced. Drier sand makes for easier dune formation. “As one goes to the north, the soil moisture probably increases, making the sand particles less mobile and, as a consequence, the development of dunes more difficult,” says Alice Le Gall (LATMOS-UVSQ, Paris).

If Le Gall’s thinking is correct, the climate variation also could explain the location of Titan’s lakes and seas, found in the northern hemisphere largely because the soil would be moister there. “Understanding how the dunes form as well as explaining their shape, size and distribution on Titan’s surface is of great importance to understanding Titan’s climate and geology,” adds Nicolas Altobelli, ESA’s Cassini–Huygens project scientist. Thus the dunes of Titan, made from frozen atmospheric hydrocarbons, may help us in the continuing effort to piece together the moon’s methane/ethane cycle, a work in progress that is still a long way from completion.