Confirming Kepler’s planet candidates is a crucial part of the process, because no matter how tantalizing a candidate appears to be, its existence needs to be verified. We have more than 60 confirmed Kepler planets and over 2300 candidates, many of which will eventually get confirmed, but it’s interesting to see that the mission’s latest announcements relate to multiple planet systems and how their presence can itself speed up the verification process.

In today’s focus are the eleven new planetary systems just announced, 26 confirmed planets in all, which actually triples the number of stars known to have more than one transiting planet. One of the systems, Kepler-33, has been demonstrated to have five planets. We also have five systems (Kepler-25, Kepler-27, Kepler-30, Kepler-31 and Kepler-33) showing a 1:2 orbital resonance — the outer planet orbits the star once for every two orbits of the inner planet — and four systems with a 2:3 resonance, with the outer planet orbiting twice for every three times the inner planet completes its orbit. 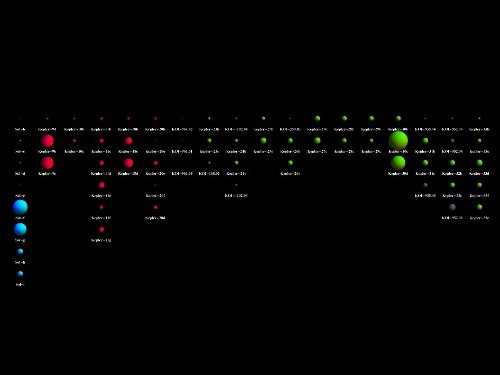 Image (click to enlarge): The artist’s rendering depicts the multiple planet systems discovered by NASA’s Kepler mission. Out of hundreds of candidate planetary systems, scientists had previously verified six systems with multiple transiting planets (denoted here in red). Now, Kepler observations have verified planets (shown here in green) in 11 new planetary systems. Many of these systems contain additional planet candidates that are yet to be verified (shown here in dark purple). For reference, the eight planets of the solar system are shown in blue. Credit: NASA Ames/Jason Steffen, Fermilab Center for Particle Astrophysics

Usefully for verification purposes, these are systems in which the planets are relatively close to their host stars, with orbital periods between six and 143 days, the tight configuration creating a clear Transit Timing Variation (TTV) signature as the planets tug and pull on each other. TTV makes verification much simpler and eases the need for backup observations from ground-based telescopes. We’ve looked at Transit Timing before in its application for possible detection of exomoons, but it’s also useful for analyzing planetary systems around fainter, more distant stars.

Eric Ford (University of Florida) and colleagues discuss the utility of TTVs in the paper on their work on Kepler-23 and Kepler-24:

For systems with MTPCs [multiple transiting planet candidates], correlated TTVs provide strong evidence that both transiting objects are in the same system. Dynamical stability provides an upper limit on the masses of the transiting bodies. For closely-spaced pairs, the mass upper limit is often in the planetary regime, allowing planets to be conﬁrmed by the combination of correlated TTVs and the constraint of dynamical stability.

And Jack Lissauer (NASA Ames) and team discuss the validity of Kepler’s multiple planet candidates in a separate paper. The italics are mine:

Find multiple planets in the same system, then, and the odds on their being verified are excellent, what Lissauer calls ‘validation by multiplicity,’ based on our knowledge of the properties of the host star and examination of planetary transits that show similar signatures around the same star. Thus the gravitational dance of multiple planets leads to faster verifications as the orbital period of each planet changes through the slightest of variations in its transit timing. Now we have yet another crop of exoplanets, fifteen of them between Earth and Neptune in size. But whether these smaller planets are rocky worlds or gaseous ‘Neptunes’ will have to be the subject of further study.