I confess it had never occurred to me to consider cloud cover on exoplanets in quite the same light that a new study does. But two Spanish astronomers from the Astrophysical Institute of the Canary Islands (IAC) are taking a look at how clouds operate over different kinds of surfaces, in the process figuring out what our Earth would have looked like from space in different eras. It’s an interesting thought: Given the movement of Earth’s continents in the past 500 million years, what would cloud patterns have been like over land and sea as landforms changed?

The researchers chose several times to study, from 90, 230, 340 to 500 million years ago, pondering how changes in light reflected from the Sun would have operated here and, by extension, how they might operate on distant exoplanets. We’ll need to keep these things in mind when we get the capability of studying the atmospheres of terrestrial planets around other stars. And it turns out that, according to the researchers, cloud cover is anything but random. Deserts tend to stay clear of clouds, while rainforests are frequently and densely clouded over.

As described in this article in Astrobiology Magazine, Enric Pallé and Esther Sanromá worked with 23 years worth of data from the International Satellite Cloud Climatology Project to study how landforms and clouds correlate. They then plugged in differing continental distributions over time, going back to roughly the period when the atmosphere’s temperature and composition varied too greatly from our own to make adequate projections. It turns out that daily variations were scarce through much of the studied period, but 500 million years ago, the changes in light were clearly marked. The paper on this work explains the situation:

The reﬂected light of the Earth at 500 Ma ago… presents much more variability in contrast to the light curves obtained for the other epochs. That is again related to the continental distribution. In this epoch, most of the continents were clustered in one hemisphere, but it also has several big islands that cause strong variability in the reﬂected light. Moreover, this epoch presents a signiﬁcantly higher mean albedo value. That can be related to the fact that in this epoch continents were covered by deserts, thus involving a higher reﬂectivity.

A light curve is about the best we’re going to get for a terrestrial exoplanet once we actually do gain the ability to study exoplanets through space-based planet-finder observatories of the future, at least in the beginning. Pallé and Sanromá’s work implies that a terrestrial world with small variations could be one with vegetation on the surface. Rocky planets with no atmosphere and planets with global cloud cover would show no variations whatsoever, but as Pallé says, “if it has an atmosphere with broken clouds, we will see it in variability.” The scattered clouds, then, might be flagging the presence of oceans and implying the existence of living ecosystems.

In the paper, Pallé and Sanromá go on to comment:

We ﬁnd that our model reproduces well the major features of the cloud distribution and the photometric light curve of the Earth at present. When applied to past epochs of the Earth, we ﬁnd that both the mean albedo value and the diurnal light curve variability remain stable as long as desert area are conﬁned to the tropical regions. When this condition is not met, as during the Late Cambrian about 500 Ma ago, both the mean albedo value and the photometric variability are greatly increased. This increased variability could help in the determination of the rotational period of the planet from an astronomical distance. Due to the large compositional and chemical changes of Earth’s atmosphere, we have not attempted to reconstruct cloud cover maps for epochs prior to the Late Cambrian. However, it is likely that the conditions for this period, i.e., higher albedo values and photometric variability, hold for much of the previous epochs of the Earth, not considering possible albedo variations due to atmospheric changes coming from clouds, aerosols, and hazes. 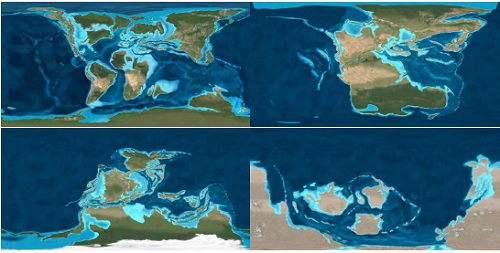 We’re obviously only beginning the study of exoplanet atmospheres, but it’s certainly worth noting that we’ve had useful results in characterizing the atmospheres of some ‘hot Jupiters,’ work which is producing various models to explain what astronomers are seeing. We’ve also studied Earth’s own light through ‘Earthshine’ (reflected off the Moon) analyzed at various wavelengths, and have examined our planet’s light curve from space. Moreover, an interesting body of work has arisen to analyze the characteristics of light as absorbed by vegetation.

It also seems obvious that when we do observe a planet similar to the Earth, it will not be at the same stage of evolution as the Earth today, making modeling of our own planet’s earlier eras a useful exercise as we piece together an observing strategy. The paper is Sanromá and Pallé, “Reconstructing the Photometric Light Curves of Earth as a Planet Along its History,” accepted by the Astrophysical Journal (preprint).