How likely are we to find other planets in the universe that are as habitable as Earth? One key to the puzzle has long been thought to be the presence of Jupiter in our own Solar System. In fact, the presence of the giant planet has become a player in the so-called ‘rare Earth’ argument that sees Jupiter as just one factor that makes our Solar System unique. Put a gas giant in the proper position in any solar system and, so the argument goes, dangerous objects from the outer system will be deflected, protecting the inner planets and allowing life to flourish. The issue gets a hard look from Jonathan Horner (University of New South Wales) and Barrie Jones (The Open University, UK) in a paper delivered in Canberra in September of 2011. 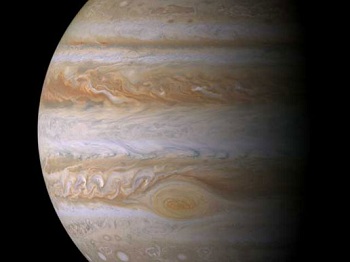 Jupiter as protector has a certain appeal. Voyager, Galileo and other probes have shown us a massive planet that is otherwise cold and forbidding, but a world with enough mass to have huge effects on other objects in the Solar System. Horner and Jones perform a series of dynamical studies to see just how potent this effect is, noting that when the question was first studied, long-period comets were the objects most thought of in terms of Earth-crossing orbits. Jupiter’s effect on these seemed clear — a significant fraction of them would be ejected from the system entirely by its influence, keeping life-threatening impacts to a much smaller number.

But our picture of the Solar System has changed dramatically in the years since, and we now believe that long-period comets are only a small part of the total picture. The ‘impact flux,’ those objects hitting the Earth, also includes near-Earth asteroids and short-period comets. Near-Earth asteroids come from the inner Solar System as well as the main belt, and it may be that some are the remains of short-period comets. Given the numbers of NEAs we’re finding, some researchers suggest that they may constitute as much as 75 percent of potential impactors.

Image: NASA’s Cassini spacecraft took this true color mosaic of Jupiter while on its way to Saturn. The smallest visible features are approximately 60 kilometers (37 miles) across. Although Cassini’s camera can see more colors than humans can, Jupiter’s colors in this new view appear very close to the way the human eye would see them. Credit: NASA.

Short-period comets are likewise a danger, their orbital periods short enough that we can observe their return, with many of them having periods of around five or six years. With origins in the Centaurs (Jupiter family comets) as well as the Edgeworth/Kuiper Belt, the Jovian and Neptunian Trojans and perhaps the inner Oort Cloud, these objects are also thought to constitute a major part of the impact threat. The authors’ dynamical simulations tell an interesting tale about the role of all three impact scenarios. Long-period comets are indeed deflected by Jupiter in its present orbit, but the paper argues that they constitute only about 5 percent of the total threat. It turns out that the interactions of the other two populations present a more complicated picture:

In each case, the impact rate from such objects is markedly lower for planetary systems that include a massive Jupiter (such as our own) than for those that have a Saturn-mass (or slightly smaller) planet at the same location. However, for masses lower than ~0.15 times that of our Jupiter, the impact flux experienced by an Earth-like planet falls dramatically in both cases, such that the impact rate were no Jupiter present (or only a very low-mass planet occupied Jupiter’s orbit) would actually be lower than that for the scenarios involving our Jupiter. As such, it seems that Jupiter can easily be at least as much, if not more, of a foe than it is a friend.

So much for the protective Jupiter motif. What happens if we make Jupiter’s orbit more eccentric than it is now? The impact flux from these simulations turns out to be greater, though ‘not punishingly so,’ to use the authors’ words. Orbital eccentricity seems to be of secondary importance compared to mass in determining the impact flux in the host system. What does turn up — and this is with increased orbital inclination rather than eccentricity of the orbit — is a greater than 50 percent depletion of the asteroid belt on relatively short time-scales (107 years) for all but the least massive ‘Jupiter’ tested (0.01 MJ). Systems like this would, after that time, contain a much depleted asteroid belt, posing a correspondingly lesser threat to the inner system.

The finding is clearly stated: “The simple notion that giant planets are required to ensure a sufficiently benign impact regime for potentially habitable worlds to be truly habitable is clearly therefore not valid.” What level of impact flux is best suited for the development of life is a separate question. Here the authors have to punt, noting that planets like the Earth should form inside the so-called ‘snow line,’ where the only water present would be found trapped in hydrated silicates. These would be dry worlds that need an external source for their oceans.

If the bulk of Earth’s water was delivered from comets from the outer system, then the role of Jupiter may have been significant. But the paper notes that the hydration of the Earth probably occurred during the migration of the outer planets, when there would have been destabilization and redistribution of the Solar System’s population of small bodies as well. This paper picks up in the post-migration era and is not designed to study the hydration question.

As to life itself, the following passage is interesting:

Once Earth-like planets have been hydrated, the role of impacts will clearly shift from having import in the delivery of volatiles to otherwise dry worlds to directly affecting the course of the development of life. Since the development of life on our planet, a significant number of ‘mass extinctions’ have occurred, in which the great majority of organisms have been extinguished. Although many of these are currently believed to [have] been caused by factors other than impacts, at least a few are thought to have been at least partially the result of collisions between the Earth and small bodies. At first glance, it seems reasonable to assume that the most promising conditions for life to develop, once a host planet has received sufficient hydration, would be those featuring the lowest impact rate (i.e., those with the least massive giant planets, or no giant planets at all, or very massive giant planets). However, it could equally be argued that at least some impact flux is necessary in order to trigger occasional mass extinctions — without the mass extinction that wiped out the dinosaurs, for example, it is debatable whether we would currently be here, debating the importance of such extinctions!

We’re left with a complex picture regarding the role of giant planets, one with clear implications for exoplanet studies. Each system needs to be analyzed carefully in terms of the complicated impact scenario, and it is certainly not enough to base everything on the existence of a gas giant in a particular orbit. Given the number of interesting targets we’re likely to find with Kepler and CoRoT and later searches of more nearby stars, prioritizing systems for astrobiological investigation is going to be important. The configuration of gas giants will be one factor in making these decisions, but Horner and Jones remind us that the variables of the impact flux are wide enough to allow life-bearing planets to exist in a wide variety of solar systems.

The paper is Horner and Jones, “Quantifying Jupiter’s influence on the Earth’s impact flux: Implications for planetary habitability” (preprint). Thanks to Dave Moore and Antonio Tavani for the reference.

Previous post: Alpha Centauri B: A Close Look at the Habitable Zone