A Waterworld Around GJ1214

I love the way Zachory Berta (Harvard-Smithsonian Center for Astrophysics) describes his studies of the transiting super-Earth GJ1214b. Referring to his team’s analysis of the planet’s atmosphere, Berta says “We’re using Hubble to measure the infrared color of sunset on this world.” And indeed they have done just this, discovering a spectrum that is featureless over a wide range of wavelengths, allowing them to deduce that the planet’s atmosphere is thick and steamy. The conclusion most consistent with the data is a dense atmosphere of water vapor. 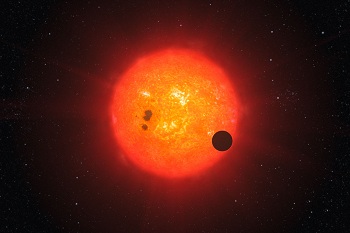 Discovered in 2009 by the MEarth project, GJ1214b has a radius 2.7 times Earth’s and a mass 6.5 times that of our planet. It’s proven to be a great catch, because its host star, an M-dwarf in the constellation Ophiuchus, offers up a large 1.4 percent transit depth — this refers to the fractional change in brightness as the planet transits its star. Transiting gas giants, for example, usually have transit depths somewhere around 1 percent, while the largest transit depth yet recorded belongs to HD 189733b, a ‘hot Jupiter’ in Vulpecula that shows a depth of approximately 3 percent.

Image: This artist’s impression shows how the super-Earth around the nearby star GJ1214 may look. Discovered by the MEarth project and investigated further by the HARPS spectrograph on ESO’s 3.6-metre telescope at La Silla, GJ1214b has now been the subject of close analysis using the Hubble Space Telescope, allowing researchers to learn not only about the nature of its atmosphere but also its internal composition. Credit: ESO/L. Calçada.

GJ1214b is also near enough (13 parsecs, or about 40 light years) that Berta’s follow-up studies on its atmosphere using the Hubble Space Telescope’s WFC3 instrument have proven fruitful. What the researchers are looking at is the tiny fraction of the star’s light that passes through its upper atmosphere before reaching us. The variations of the transit depth as a function of wavelength comprise the planet’s transmission spectrum, which the team is able to use to examine the mean molecular weight of the planet’s atmosphere. Earlier work on GJ1214b’s atmosphere had been unable to distinguish between water in the atmosphere and a worldwide haze, but the new work takes us a good way farther and into the planet’s internal structure.

The reason: A dense atmosphere rules out models that explain the radius of GJ1214b by the presence of a low-density gas layer. The researchers take this to its logical conclusion:

Such a constraint on GJ1214b’s upper atmosphere serves as a boundary condition for models of bulk composition and structure of the rest of the planet. It suggests GJ1214b contains a substantial fraction of water throughout the interior of the planet in order to obviate the need for a completely H/He- or H2-dominated envelope to explain the planet’s large radius. A high bulk volatile content would point to GJ1214b forming beyond the snow line and migrating inward, although any such statements about GJ1214b’s past are subject to large uncertainties in the atmospheric mass loss history…

If you examine the density of this planet (known because we have good data on its mass and size), you get about 2 grams per cubic centimeter, a figure that suggests GJ1214b has much more water than the Earth and a good deal less rock (Earth’s average density is 5.5 g/cm3). We can deduce a fascinating internal structure, one in which, as Berta says, “The high temperatures and high pressures would form exotic materials like ‘hot ice’ or ‘superfluid water’ – substances that are completely alien to our everyday experience.”

We wind up with a waterworld enveloped in a thick atmosphere, one orbiting its primary every 38 hours at a distance of some 2 million kilometers, with an estimated temperature of 230 degrees Celsius. I was delighted to see that Berta and colleagues have investigated the possibility of exomoons around this planet, looking for “shallow transit-shaped dimmings or brightenings offset from the planet’s transit light curve.” The team believes no moon would survive further than 8 planetary radii from GJ1214b, and indeed they find no evidence for Ganymede-size moons or greater, but the paper is quick to note that:

Due to the many possible configurations of transiting exomoons and the large gaps in our WFC3 light curve, our non-detection of moons does not by itself place strict limits on the presence of exo-moons around GJ1214b.

All of which is true, but what a pleasure to see the hunt for exomoons continuing to heat up.

The paper is Berta et al., “The Flat Transmission Spectrum of the Super-Earth GJ1214b from Wide Field Camera 3 on the Hubble Space Telescope,” accepted for publication in The Astrophysical Journal (preprint).

Next post: M-Dwarfs: A New and Wider Habitable Zone