Physicist Les Shepherd, whose funeral is today, left friends throughout the astronautical community. Claudio Maccone, who worked with Shepherd on many occasions, was quick to offer his recollections of this remarkable man whose standards of excellence and unflagging support helped many young scientists as they embarked on careers in space science.

I was then working at Alenia Spazio SpA in Torino (Turin), Italy, and I had this secret love for future interstellar space missions (“secret” since at my space company nobody was interested, of course). So, I consulted with my good old friend and “teacher” (he is senior than I) Giovanni Vulpetti, who was in a similar position at Telespazio in Rome as I was at Alenia Spazio in Turin (the two space companies were then “rival” in Italy, trying to get the same funds from both ESA and ASI, and sometimes from NASA also), which added “risk” to our mutual conversations. Giovanni said: “If you come to Washington D.C. at your expenses (Alenia would never have covered a mission for me to deal with interstellar exploration) then I will introduce you to Dr. Leslie Shepherd, a physicist of the highest distinction and Chair of the IAA Interstellar Exploration Committee (ISEC). At that time I had just run in Turin the first conference ever about the FOCAL space mission to 550 AU, held on June 18th, 1992, at the Politecnico di Torino (Figure 1), and so I decided to try.

I flew to Washington and met there with Les Shepherd for the first time. He was an aristocrat of physics, you know, but with a typical British sense of humor. After Giovanni introduced us to each other, at a point I felt proud enough to tell that I had done my Ph.D. at the Department of Mathematics of the University of London King’s College.

Dr. Leslie Shepherd replied “I’ll forgive you. I did my Ph.D. at University College in Gower Street!”, and of course I had to shut up, having completely forgotten the century-old rivalry between the two most renowned Colleges (so they say) on the University of London. Later I must have thought something like this: “Gee…, I just met him and immediately spoiled my reputation with this British Aristocrat of Science”. But that wasn’t the case, due to Les and Giovanni’s open-mindedness. Indeed, by the time of the 1997 IAF Congress in Torino (my town) I had already raised to the position of Secretary of ISEC, with Les Shepherd as Chair and Giovanni Vulpetti as Co-Chair. Unfortunately, ISEC was finally disbanded by the IAA in the restructuring of the IAA that took place around the year 2000, and so ISEC had to… be reinvented in other forms… 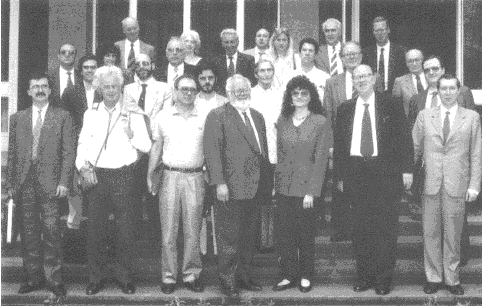 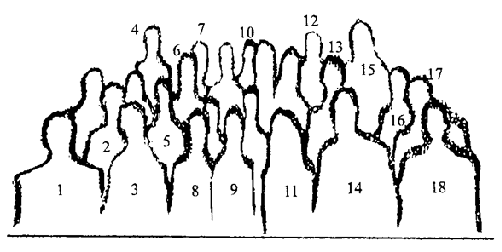 Distribution of ETCs at Various Rates of Occurrence

Figure 1: First conference ever about the FOCAL space mission to 550 AU, held on June 18th, 1992, at the Politecnico di Torino (Turin, Italy).

The relativistic rocket equation discovered by Jakob Ackeret: something Les and I had in common…

When I was a physics student in Turin (1967-72) I had to pass an exam called “Meccanica Superiore” (Higher Mechanics). That was of course classical mechanics (as opposed to quantum mechanics) and the textbook was the one on which generations of physicists have learned the subject: Classical Mechanics by Herbert Goldstein (1950). On page 213 of that book, Exercise 10, was my favorite: the relativistic rocket equation discovered by the Swiss aeronautical engineer Jakob Ackeret (1898 – 1981) and published by him in German in Helvetica Physica Acta in April 1946. Les Shepherd once told me that he also had admired that equation from the very first time he saw it, since it plainly pointed out that Einstein’s (special) relativity was not just something for particle physicists only: it could equally well be applied to relativistic interstellar flight! Actually, Les told me that he was the one who had Ackeret’s 1946 paper translated from the German into English and published in the Journal of the British Interplanetary Society, Vol. 6 (1947), pages 116-123. Thank you, Les!

Anecdote #1: how a British aristocrat could be tough enough to reject a paper he did not like

Over the years after 1992 Les, Giovanni and I also became involved in selecting the papers admitted for presentation at the ISEC Session of the IAF Congress (as the current IAC were then called) to be held on that year. I remember (it must have been at the Paris Spring Meeting in 1994) that we were uncertain about admitting or rejecting a paper for the next IAF in Jerusalem (October 9–14, 1994) (at that time my position at Alenia had somewhat improved, and so I could finally attend the IAF in Jerusalem at the company expenses: wow !). Well, I must confess that I always tried to admit papers even if I did not like them: this was due to my “prejudice” that, sometimes, young people do not have the funds to register and travel to big conferences, and they get those funds from their companies only if their paper is accepted.

So, Les and I were politely arguing about one such case, and, using the “British polite persuading techniques” that I had learned at King’s College London during my Ph.D. I thought that I could convince Les to accept that paper. Well, I was wrong. “You gave me a whole bunch of good reasons” – Les said (I still remember his words) – “why this paper must be rejected” and he was able to reverse all my arguments one by one, until the paper was finally indeed rejected. Gee… that was the generation of Defenders of the British Empire that won World War Two, you know…

Anecdote #2: how a British aristocrat could be friendly enough to “teach” Fred Astaire’s words to an Italian newcomer…

Before you go on, please click here and listen to this song. Well, this is the famous Fred Astaire – in Follow The Fleet (1936) – “We Saw The Sea” is the song. Les Shepherd was then 18 years old and so it is quite natural that he came to learn by heart all the words in the song. But it was not so natural that he could teach them many years later to an Italian newcomer learning English like myself. You see, to understand the situation better, you must remember that the Internet has not been available all that long. So, once in the late 1990’s Les and I were talking at some coffee break and I think I told Les that, in order to improve my colloquial English, I liked to watch original Anglo-American movies in TV, since the songs there could not be translated into Italian and so were the authentic songs. I added that I particularly enjoyed the above song that you just heard a little ago. Well, I had hardly finished talking when Les immediately taught me the words. He knew them all by heart, unbelievable to me! What a good Friend he was!

Anecdote #3: how a British aristocrat and his Wife could be kind enough to forgive lower-class people about their lack of culture…

Finally here is a story about Les Shepherd, his wife and my mother. Well, I am not ashamed to confess that I come from very low-class people: my father was a Pirelli worker, my mother was a dress maker, and they did not speak any foreign language. But I was their only child, they loved me, and always supported my hunger for knowledge, until I got to King’s College London for a Ph.D. in mathematics.

But let me go back to Les and his wife. Once they had to call me on the phone from England, for some reason. I was not home, I was working at Alenia, and my mother answered the phone. She heard a lady speaking English, that she could not understand at all. At a certain point, however, my mother heard this Italian word “Pastore… Pastore… Pastore”, and yet that lady on the phone kept talking English again… When I came back home after work, my mother told about that strange call, and that was a mystery for me too.

Until I met with the Shepherds several months later and Mrs. Shepherd said to me: “You know, we tried to call you on the phone… [Shepherd is Pastore in Italian], but your mother did not understand and she put the phone down.